Protesters are putting the pressure on Pence to act on the president’s behalf when Congress meets to confirm the Electoral College votes.
Bob Smietana – Religion News Service|January 5, 2021 06:00 AM 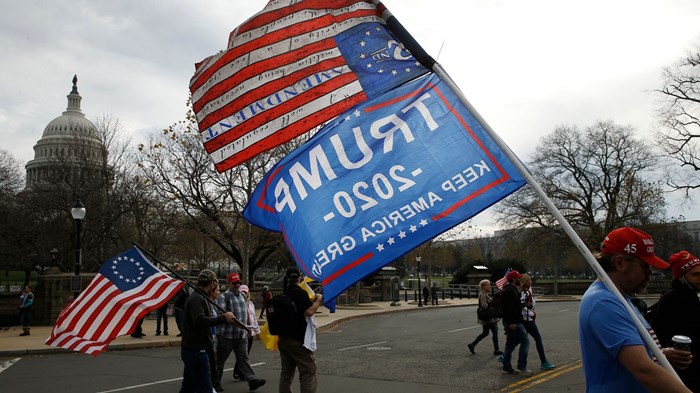 A die-hard group of Trump supporters hopes 2021 will start with prayer, fasting, and perhaps a miracle.

Organizers of the Jericho March, slated for Tuesday and Wednesday, have called on “patriots, people of faith and all those who want to take back America” to travel to Washington on those days for a pair of marches to overturn the recent presidential election.

Marchers plan to blow ritual Jewish horns called shofars on the first day before circling the Supreme Court building seven times in imitation of the Israelites’ siege of the city of Jericho described in the Bible’s Book of Joshua. On Wednesday, they plan to do the same around the US Capitol building.

The demonstrators will also pray that Vice President Mike Pence and members of Congress will reject slates of electors from Arizona, Michigan, Wisconsin, Georgia, and Nevada, where Trump loyalists claim there was rampant election fraud.

Courts in those states, along with federal courts, including the US Supreme Court, have rejected a series of lawsuits filed by supporters of President Donald Trump, ruling that there was no evidence of election fraud. Former US Attorney General William Barr told the Associated Press in early December that the Department of Justice had found no evidence of wide-scale election fraud.

Preceding the two days of protest, the organizers will hold candlelight prayer vigils and “self-led” marches in the nation’s capital. Similar marches will take place in the states where marchers claim the elections were fraudulent.

In mid-December, a rally in Washington organized by the same group of pro-Trump activists featured speakers such as Eric Metaxas and MyPillow founder Mike Lindell. The same day, members of the far-right militia the Proud Boys burned Black Lives Matter banners at two DC churches.

Metaxas and other evangelical Trump supporters have held a series of evening prayer calls featuring pro-Trump figures such as Michael Flynn, a former presidential adviser who pleaded guilty to lying to the FBI and was later pardoned by Trump, along with religious leaders who prophesied that Trump would be reelected.

Jericho March organizers said in a statement that they demand that administration officials, including Pence, intervene in the election.

“Vice President Pence has the ability to elect the President himself and Jericho March calls on him to exercise his rightful power in the face of the blatant election fraud and corruption,” the group said in a statement.

Pence will preside in the Senate on Wednesday when Congress meets to confirm the votes of the Electoral College. Federal law requires him to accept the slates of electors that have been certified by states, according to legal experts.

The announcement of the Jericho March came after Republican Sen. Josh Hawley of Missouri announced he would object to the results of several states being certified. Hawley is one of a dozen GOP senators and many more House Republicans who are expected to reject Biden’s win.

Conservative Republican Sen. Ben Sasse of Nebraska accused his colleagues of putting political ambition above the nation’s good and trying to disenfranchise millions of American voters.

“Adults don’t point a loaded gun at the heart of legitimate self-government,” he wrote.

More than 2,000 religious leaders, including former World Vision president Rich Stearns, have signed a statement organized by progressive faith groups that calls on Congress to honor the election results and avoid “a delayed and drawn-out objection,” the AP reported.

“I have never seen anything in these United States of America I found more astonishingly seductive & dangerous to the saints of God than Trumpism,” Moore said on Twitter in mid-December. “This Christian nationalism is not of God. Move back from it.”