As students report high levels of anxiety and isolation in a new InterVarsity survey, ministry leaders look to small groups to provide community for Gen Z.
Kate Shellnutt|July 6, 2021 08:00 AM 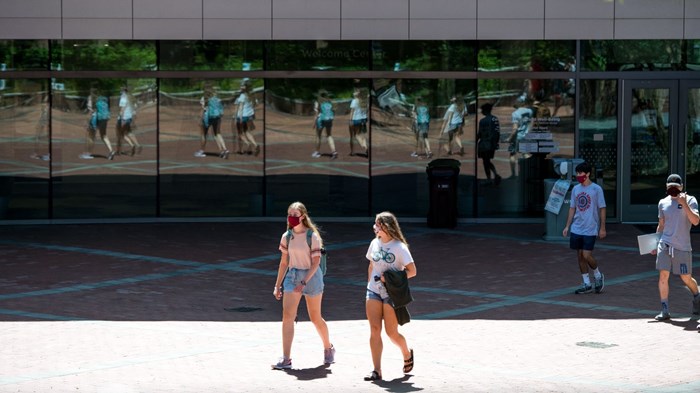 Even as many colleges lift COVID-19 restrictions and anticipate more-active campus life in the fall, ministry leaders expect that pandemic will continue to shape how they gather and have lingering effects on students’ mental health and social lives.

A survey commissioned by InterVarsity Christian Fellowship and released today is the latest in a string of research indicating that college students suffered higher levels of stress and anxiety as their lives inside and outside the classroom grew more remote and isolated.

The ministry found that by the end of the school year in May 2021, over a year after the pandemic began, around half of InterVarsity students said their mental and emotional health had been negatively impacted. Of those, the majority said the biggest challenge contributing to their mental state was loneliness and isolation.

At the University of South Carolina, campus minister Lizzie Keegan saw the suffering firsthand, especially among freshmen students, who faced the challenge of making friends their first year of college in the midst of campus rules designed to keep students apart.

While doing Instagram outreach to connect with new students, Keegan noticed one freshman who admitted she hadn’t made friends at UofSC and was asking students to direct message her if they wanted to be her friend. “I thought if she’s willing to do that, how many more students feel like that but wouldn’t put themselves out there,” Keegan said.

The freshman ended up coming to InterVarsity gatherings once her schedule allowed mid-year. “She was like, ‘Oh my gosh. I can’t believe this is a room of people—yes, in masks—who want to be friends, who enjoy each other, who laugh together, and then study Scripture together,’” Keegan said. By the end of the year, the student had rediscovered both friendship and faith; she recommitted her life to Christ.

For the leaders of the UofSC InterVarsity chapter, her story underscored the desire for community so many students have, especially after missing out on the typical social opportunities of college life.

“There’s a huge opportunity of people who are desperate for hope and a desperate for community, perhaps more than we’ve ever seen in history because of the pandemic,” said Tom Lin, president of InterVarsity. “Our role needs to be on developing these witnessing communities in the face of this isolation that Gen Z is feeling, and our focus has to be leading them toward hope in the midst of the hopelessness they feel.”

Even before the pandemic, Christian outreach had recognized these areas of need among the next generation. With an uptick in anxiety disorders, depression, and teen suicide happening alongside young people’s social media use, more youth pastors and youth ministries rely on mental health resources and see professional counselors as partners in the work they do.

“In certain ways, it just accentuated and accelerated the concerns that we already had about Gen Z. This generation generally has been shaped by higher rates of mental health concerns, anxiety and such,” said Lin. “Even though Gen Z is so connected, they’re all about digital connectivity, the figure that struck me was 71 percent of those who had a negative experience during the pandemic attributed it towards isolation, toward lack of community, toward lack of social interactions.”

Keegan at UofSC is known among her students for regularly recommending they turn off their phones and spend more time in silence and sabbath. Even as her chapter relied more on social media for recruiting and making connections last year, their goal was to move those conversations to face-to-face—well, mask-to-mask—as soon as possible.

It wasn’t just the pandemic that stirred students’ anxieties. Across the country, more than half of InterVarsity participants are students of color, many of whom felt the racial trauma around the highly publicized deaths of George Floyd and other Black victims last year. Racial justice ranked as the most important social issue for students in the recent survey.

At UofSC—located in Columbia, South Carolina—there has been a significant shift among the student body around racial issues. Christian students of color have always been interested in the links between Jesus’ teachings and racial justice, but now the vast majority of white students are eager to learn and discuss the topic too.

At the University of Virginia in Charlottesville, digital gatherings during COVID-19 shutdowns in 2020 meant the InterVarsity chapter could continue to connect with students over the summer. As protests took place across the country, they held virtual sessions to discuss biblical reconciliation and justice.

Lin said several chapters across the country saw levels of online participation they would have never reached with in-person events, particularly around faculty involvement. An event hosted by Northwestern University’s chapter, themed around “God and the Human Mind,” drew more than 1,000 faculty from across the country, while another on racial justice brought together around 350 participants.

While Zoom and online formats allowed them to keep gathering when campus restrictions didn’t allow for big events, ministry leaders said the most significant connections happened on the small-group level.

At UVA, the chapter was known for its fun campus outreach programs, like a massive Christmas party, scavenger hunts, and trivia nights. “We lost all of those. Suddenly, we weren’t meeting people naturally,” said Emily Isler, InterVarsity campus staff at UVA. “They weren’t just wandering into our large groups on grounds. It was only relational; the only way we were going to meet people was by personal invite.”

As a result, the small-group setup—where around 100 total students meet weekly with those of their same year and gender—shifted to become the central focus of InterVarsity at UVA. And it took on more significance in students’ lives.

“People weren’t like, ‘Oh, this is another thing that’s part of my busy schedule.’ Instead, they said, ‘This is actually my community, and I want to invite my other friends into this,’” Isler said.

Isler has already booked rooms for the fall semester, where they can finally return to in-person large group gatherings with student-led worship and speakers. As excited as she is about getting to see the whole chapter again for the first time in 18 months, she knows there will be a reentry period.

“I think there’s going to be more adjustment than students think there will be,” Isler said. “Ruth Haley Barton has talked about the collective trauma we’ve undergone, and we don’t just bounce back from that. We’re going to carry something with us.”

But the lingering effects from 2020 might not be as troubling as we expect. Psychologists commissioned by the medical journal The Lancet found that, despite the losses and suffering of the pandemic, people adapted relatively well. In an article out Sunday in The Atlantic, they celebrated “the astonishing resilience that most people have exhibited in the face of the sudden changes.”

“Resilience” was also how Keegan described what her Gen Z students learned during the pandemic.

“People with underlying mental health conditions like depression and anxiety were certainly worse during the global pandemic, but they knew that we were all going through this,” she said. “Obviously there’s a lot of cost to the pandemic, but I have hope that for this generation, it’s going to also give them that resilience as well.”