Nearby congregations offer snacks and spiritual care to those tasked with “bringing order to the chaos.”
Kate Shellnutt|June 26, 2021 08:19 PM 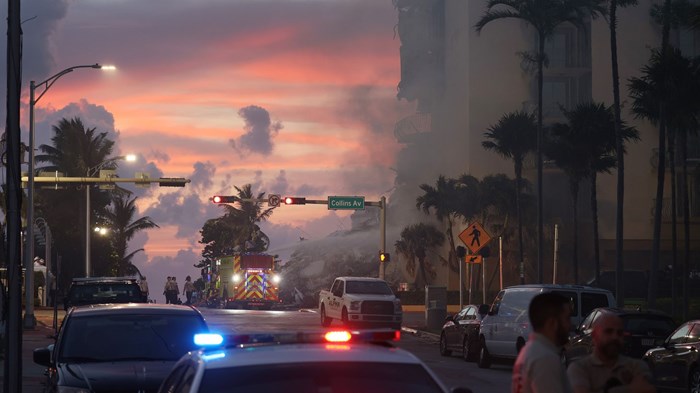 Miami Beach pastor J. P. Funk woke up Thursday morning to the news that a condo building only about a mile from his church had collapsed, leaving more than 150 people missing in the rubble. At least two people connected to Calvary Chapel Miami Beach lived in the building, including the mother of one of its members.

Funk’s focus immediately turned to the disaster—but he worried that his congregation wouldn’t be able to help in the crucial early days of search and rescue. Half its staff was on vacation, and they initially had no way to access the disaster site, which was surrounded by law enforcement and clouded by smoke. “You can see the smoke from smoldering ruins reminiscent of 9/11,” he told CT.

As the news began to air footage of Champlain Towers South in Surfside, with its fallen-away side and piles of concrete below, local churches responded the best way they knew how: They showed up to offer support for first responders and distraught families and gathered to pray for miracles as the rescue efforts went on day by day.

The 12-story beachside building was home to an international mix of foreign retirees, South American immigrants, and Orthodox Jews. The closest church is right across the street, a Spanish-speaking congregation called Casa.

Casa offered up its building to law enforcement and quickly sent out calls for members to bring snacks and drinks. Volunteers walked through the busy tangle of media and rescue workers to deliver refreshments and words of encouragement.

Calvary Chapel Miami Beach, thanks to its involvement with police chaplains and the Florida Christian Peace Officers, secured permission to minister at a pop-up tent beside the collapsed building. They “covered the scene in prayer,” and the Miami Beach chief of police specifically asked them to lift up his team.

As the days go on without more of the missing residents being discovered, though, their prayers’ focus has gone from successful rescue efforts and miraculous survival to the inevitability of grief with the likely death toll of this disaster.

“On Friday, along with [praying for miracles], our focus has been the compassion and presence of God in the midst of crisis at a human level,” Funk said. “We pray for the families to quickly recover their loved ones’ remains as this causes great anguish once it is most probable that they have perished.”

Search teams found another body on Saturday, bringing the confirmed death toll up to five. There are 156 residents unaccounted for. 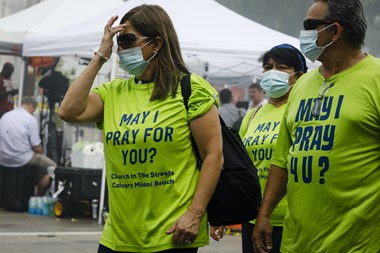 In instances where loss comes so suddenly, so unexpectedly, and on such a great scale, people raise questions about how God could allow such deaths to take place. “There are two things that are the most true in every human tragedy: God is good, and God is merciful,” Funk said.

“We don't believe God punishes the image-bearers of his likeness by disasters; we are all frail and fragile in our humanness,” he said, citing Luke 13:1–5.

Teams from out of town, including chaplains dispatched through the Billy Graham Evangelistic Association and a 40-person group through Youth With a Mission (YWAM), have come down to Miami to provide additional spiritual care.

“Pray for the family members of those who lived in the building waiting to hear if their loved ones are safe or not,” Franklin Graham said. “The Bible tells us, ‘God is our refuge and strength, a very present help in trouble’ (Psalm 46:1).”

Due to its proximity to the disaster, Casa canceled in-person services for Sunday, but will be worshiping online following weeknight prayer vigils for the disaster. “We will be singing to God and praying for all affected!” a post on the church’s Facebook page read. Casa thanked fellow churches—including Rich Wilkerson’s Vous Church in Miami—for their donations and support.

Church by the Sea, in nearby Bay Harbor Islands, dedicated a Sunday service to praying for the disaster and collecting relief funds. Church leaders said none of their congregants lived in the building, though their family or friends may have.

“Strengthen us that we may help carry the burden of those who suffer, those filled with worry, concern and grief; and those who still wait to hear of loved ones,” ministers Rob and Barbara Asinger wrote. “Make us bearers of hope and agents of healing. Let your love be known through all those who work to bring order to the chaos—the firefighters, emergency workers and police.”

A “very large group” from Surfside’s Jewish community lived in the building and remains unaccounted for, according to Rabbi Sholom D. Lipskar, the founder of the Shul of Bal Harbour. The Shul already raised over a half-million dollars in relief funds. Like their Christian neighbors, his community is praying for miracles, he said, “because the circumstances are very, very grim.”

With reporting from the Associated Press.