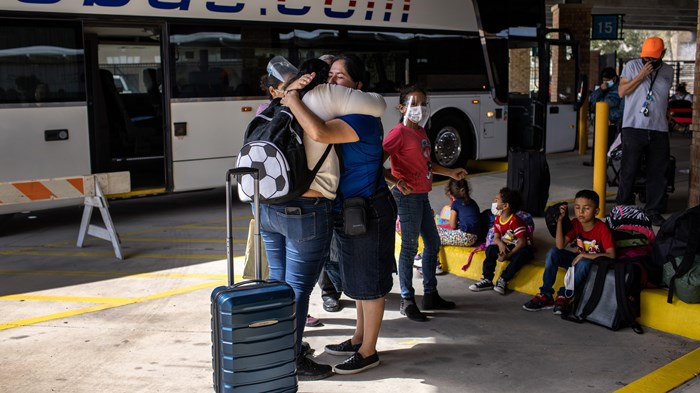 When the Honduran woman got to Alma Ruth’s studio apartment in McAllen, Texas, she took a shower.

She was nine months pregnant, and it was the first real shower she’d taken in more than a year and a half, since a day in 2019 when she and her husband and their toddler fled the violence that has wreaked havoc on Central America.

She thanked God for the clean, hot water, and for the people who had helped her along the way.

“God is always surprising us with his miracles,” she told CT in Spanish. “The rest of my life will not be enough time to thank him for all the miracles he has done for my family and for me.”

The woman, allowed into the US in March, is one of an estimated 68,000 asylum seekers who now have permission to wait for their court hearings in the United States, as President Joe Biden reversed Donald Trump’s “Migration Protection Protocols.”

The former president’s policy, known as MPP or the “Remain in Mexico” policy, was suspended in January. The Biden administration officially ended it last week in a victory for asylum seekers—including the woman taking the shower, who asked that her name not be used because her asylum case is still pending—and their advocates, like the shower’s owner, Alma Ruth.

But Ruth, founder and president of Practice Mercy, is worried about the new challenges asylum seekers will now face.

“They finish one Via Dolorosa,” she said, using the Spanish phrase for the “path of sorrow” that Jesus took on the way to the cross, “and they start another one.”

The migrants in the makeshift refugee camp in Matamoros found themselves in a kind of no man’s land, neither “here” nor “there,” with few lawyers, few social workers, and few Christian mission and aid groups to help them as they waited to apply for asylum. Now, as they finally leave the camp and enter the US, will they fall further into the cracks between Christian ministries?

The need in the camps

Ruth originally felt called to do ministry around the world, working in Cuba and Jerusalem. A Mexican citizen, she moved to the border city of McAllen in 2012 and began her work with the international community.

When the Remain in Mexico program began in 2019, Ruth soon realized that the need in her backyard was too big to ignore. She began visiting the camps as they swelled in size, helping families procure basic necessities and praying with the many Christians who were desperate for spiritual encouragement.

According to Ruth, the majority of Spanish-speaking asylum seekers are people of faith. Those living in the camps had begun to form their own churches, meeting in tents. But while Ruth scurried back and forth across the border, she began to wonder: Where was the American church?

Sometimes churches and ministries would donate larger items, and even visit. But as far as a sustained, Christian presence in the Matamoros camp, Ruth said, it was limited. This messy, transient community didn’t seem to fit into most ministry plans.

Once inside the US, more Christian ministries have systems in place to help immigrants and their families, meeting them at bus stations, connecting them to community services, and in some cases hosting ministries in their native languages. But for those out of range, help has been scarce.

During the COVID-19 pandemic, even the few visiting churches and short-term missions stopped coming. But those committed to the camps continued crossing back and forth daily, praying, delivering food, monitoring health.

Ruth sought out women and children, paying special attention to pregnant women, who were particularly vulnerable during the pandemic, intense summer heat, flooding brought by Hurricane Hanna, and dangerous conditions of Winter Storm Uri. One woman gave birth outside the camp. Another crossed the Rio Grande on an air mattress during labor and had the baby in a Customs and Border Patrol cell.

The woman from Honduras crossed into the US with her husband and toddler in late 2019. The young family hoped to find safety and security in America and live near the husband’s relatives in Minnesota.

According to US law, they had to be physically present in the country to apply for asylum. So they came. Then the woman and her family were sent back to Mexico with thousands of other asylum seekers, where they were absorbed into an ever-growing huddled mass, and told to wait.

“We endured hunger, cold, heat, and racism for a long time,” the woman said. “We suffered many injustices.”

The little help there did not come from well-funded humanitarian organizations, international ministries, or large American churches. It came from those who habitually allow their lives to be interrupted so they can slip into the church’s cracks and blind spots in search of those at risk of being forgotten.

Ruth started Practice Mercy, a Christian nonprofit that allowed her to receive financial support from American churches. She said Christians must change the way they think about ministry to those caught up in the country’s chaotic immigration system, in which planning and predictability are a luxury.

When Winter Storm Uri blanketed the temperate border towns in ice and snow, Ruth brought blankets to the migrants. When the woman from Honduras got pregnant, “Sister Alma” was there to help.

“I thank God for putting her in our path,” she said. “She was and continues to be an angel for us.”

When the US government began bringing the asylum seekers into Texas at the start of the year, Ruth started working to get them to their destination. Donations allowed her ministry to arrange Airbnb rentals while the immigrants waited for travel arrangements. Occasionally, she let them shower in her studio apartment.

“For many of them it was the first time they took a real shower in two years,” Ruth said.

Soon it was clear that, with Remain in Mexico over, there would be additional needs. Asylum seekers usually have family or camaradas waiting for them in a destination city, but many of those are recent immigrants themselves. When the pandemic devastated the service and hospitality industry, many of the recent arrivals found themselves in precarious financial situations.

Few could afford to pay for a plane or even bus ticket for an entire family to travel from Texas to Minnesota or anywhere else in the US, Ruth said. “We realized those support networks are extremely fragile.”

On social media, Practice Mercy began to broadcast calls for help in the US cities where asylum-seeking women and children needed to go. Ruth asked for help with the migrants’ travel and supporting them once they arrived.

When the pregnant woman from Honduras was allowed to re-enter the US in March, Ruth knew that she was about to have her baby. She would need real support, not a one-time meal or a referral to a shelter. Ruth took the family into her studio apartment and began working on getting them to their destination in Minnesota as quickly as possible.

This time, Ruth did not rely on Instagram. She called a supporter, Melissa Carey, who happened to live in the Twin Cities area.

“As a believer, you are called”

Carey emigrated from Peru with her family at age 10. She remembers the feeling of nervousness that comes with temporary legal status. She and her siblings didn’t enroll in free lunch programs at school—even when they were hungry—because they were afraid it would somehow violate the terms of their visa.

“When you’ve experienced it yourself, you know that dread of trying to do everything right so you don’t get kicked out,” Carey said. “It controls your life.”

Keeping her head down is now second nature, but when Carey became a citizen 11 years ago, she felt compelled to begin advocating for those living in fear.

“As a believer,” she said, “you are called to be the voice for those who have no voice.”

She began volunteering and became involved with a campaign to make driver’s licenses available to undocumented immigrants. She found that, as a Christian with many conservative values, she could talk with some legislators and lawmakers in a way others could not. Soon she began working with the Minnesota immigrant movement.

As a volunteer who is also a full-time mom, Carey’s other niche has become crisis response. She regularly responds to last-minute emergency calls, helping families connect to food or shelter for the night while reaching out to a network of faith communities to see if longer-term support is possible. The more people she helps, the more likely it is she’ll get the next call.

Immigration emergencies don’t happen according to a schedule, she explained. There isn’t a regular database of needs and opportunities someone can check at their convenience. Instead, those committed to helping need to be within arms’ reach at a moment’s notice. They have to be consistent amid inconsistency.

“You have to choose to get involved in a community and continually show up,” Carey said. “So much of serving and helping is actually having community with your neighbors.”

In March, one of those emergency calls was from Ruth, whom Carey had been following and supporting from afar. Ruth told Carey about the pregnant woman and her family, and Carey sprang into action, calling Faith City Church in St. Paul to see if they could purchase plane tickets. They did, and committed to supporting the family further while they settled in.

It took longer to find midwives who spoke Spanish and could give the woman the kind of care she needed after spending her entire pregnancy in a makeshift refugee camp with no prenatal care. It wasn’t enough for Carey to find someone to do an examination, she said. “She needed to be nurtured.”

Carey made a connection just in time for the midwives to lead the Honduran woman through a difficult birth that would have been dangerous for both mother and child without the midwives’ expertise and tools.

“We, the privileged, don’t realize the resources we have,” Carey said.

Concerned for the future

Mother and child are safe and healthy and living in Minnesota while they wait for the government to hear their arguments why it would not be safe for them to return to Honduras.

The long-term camps along the border have largely been emptied, but smaller encampments remain and shelters are full of people hoping to enter as the Biden administration tries to regulate entry procedures—which so far have been uneven. Asylum-seeking is also a regular part of the southern US border, and people in great need will continue to get on planes and busses out of McAllen, El Paso, San Diego, and other cities to start new lives around the country.

Ruth and Carey say the church must take a more active role in both the acute crises and the long-term chaos of the asylum process, where court backlogs and detention practices keep families in disconnected limbo for years.

They say ministry to the “least of these” has to be flexible and faithful, proximate and consistent, aware of the needs and resources in the community, willing to call in a request.

For the pregnant woman, it just took a few faithful Christians to make a difference.

“I thank God for beautiful people who have helped us a lot and continue to do so,” she said. “God is always surprising us.”