Gordon College loses fight over “ministerial exception” to employment law, but may appeal.
Daniel Silliman|March 10, 2021 06:00 AM 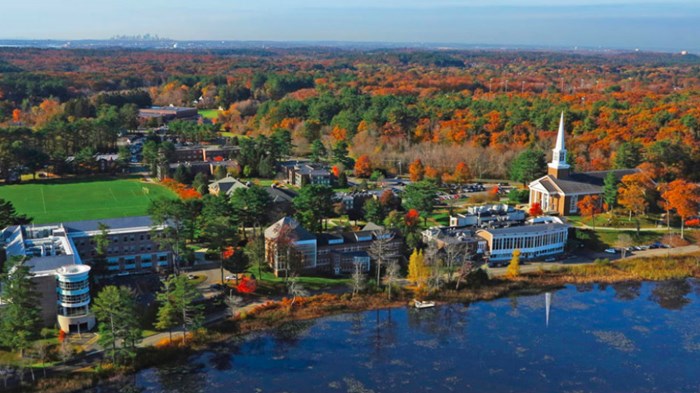 Some professors at evangelical colleges may be ministers. But they are not all ministers and they’re not ministers just because they teach at a Christian school, the Massachusetts Supreme Court decided last week.

The court ruled against Gordon College in a case that could have far-reaching consequences for evangelical colleges and universities and the faculty and staff who work at those schools.

The court said that Margaret DeWeese-Boyd, a social work professor who was denied promotion, may sue the school, alleging discrimination. Gordon argued that because it is a Christian school and professors are required to integrate their faith into the classroom, DeWeese-Boyd was a minister and is not protected by the federal government’s prohibitions on workplace discrimination.

In 2016, Gordon revised its faculty handbook to say that all professors are ministers. President D. Michael Lindsay (who is also on CT’s board of directors), testified that “there are no non-sacred disciplines” at Gordon, and said he tells junior faculty that joining Gordon is like joining a religious order.

“While it may be true that Gordon employs Christians, and ‘Christians have an undeniable call to minister to others,’” Justice Scott Kafker wrote, “this line of argument appears to oversimplify the Supreme Court test, suggesting that all Christians teaching at all Christian schools and colleges are necessarily ministers.”

The court said Gordon’s argument might even stretch the ministerial exception beyond professors, implying that “coaches, food service workers, or transportation providers” are also ministers, because their faith is important in their daily life and they contribute to the mission of the school, which is religious.

“The breadth of this expansion of the ministerial exception and its eclipsing and elimination of civil law protection against discrimination would be enormous,” Kafker said.

Gordon’s attorney, Becket vice president Eric Baxter, tried to reassure the court during oral argument that this case wouldn’t open the door for Christian colleges to just ignore large chunks of federal law. The case was about one professor, he said, who was denied promotion not for religious reasons but because of a lack of scholarship and who shouldn’t be allowed to sue, because she performed an important religious function for the school.

“There’s no question that plaintiff was teaching in a devotional manner and she herself acknowledged that,” Baxter told the court in early January. “We’re just asking [the court to find] that this plaintiff had an important ministerial role that triggers the ministerial exception.”

Baxter told CT that there may be “edge cases” where it’s hard to decide if a professor of math or computer science is teaching religion, but there’s no question DeWeese-Boyd’s work should fall under the ministerial exception.

Gordon expected DeWeese-Boyd to integrate her faith into her discipline and teach students how to apply Christian truths to social work. Baxter said the evidence shows DeWeese-Boyd “taught in a devotional manner,” and her classes deepened and strengthened students’ faith.

The judges in the case pushed Baxter for a fuller definition of a minister. He was asked several times if social work classes were “teaching religion” because of the value content, or if any class, taught by a Christian, is teaching religion.

“You don’t have a rigid test. I don’t know how they use these words, but it’s not a rigid test,” Justice David Lowry said during oral argument. “Where do we look to for a doctrine? How do we grab onto something here?”

DeWeese-Boyd’s attorney Hillary Schwab, appealing to the details in the Supreme Court’s previous cases involving the ministerial exemption, said there were “19 or 20” things that make a professor a minister. If the social work professor had led her students in prayer, taught them religious doctrine, or taken then to chapel, for example, she should be thought of as a minister.

The Massachusetts judges decided to do a side-by-side comparison between DeWeese-Boyd and the teachers in the previous cases decided by the Supreme Court. The Lutheran teacher at the center of Hosanna-TaborEvangelical Lutheran Church and School v. Equal Employment Opportunity Commission was commissioned by a church to teach, led students in prayers, and took the minister’s housing allowance on her taxes. The Catholic teachers in Our Lady of Guadalupe v. Morrissey-Berru taught Catholic doctrine and took students to chapel.

The court found DeWeese-Boyd did none of those things. She was a Christian teacher at an evangelical school, but not a minister.

According to the Massachusetts court, this ruling doesn’t clarify whether other Christian college professors in the country or even in the state are protected by federal employment laws or not.

“Unfortunately, the parameters of the exception—that is to say, who is covered by the ministerial exception—remain somewhat unclear,” Kafker wrote.

Gordon has not yet decided whether to appeal the ruling. If the school does appeal, the case will go to a federal court. If not, DeWeese-Boyd’s lawsuit against Gordon will continue, and a statue court will examine evidence the school discriminated against the social work professor when it denied her tenure.

Baxter said that whatever Gordon decides to do, the question of whether professors at Christian colleges are ministers is sure to come up again in the courts.

“There are a lot of religious schools where a core part of their mission is to form young adults in the faith or students in the faith,” he said. “I think the issue will come up again. This is one state supreme court and there are 49 other states and 11 federal court districts.”