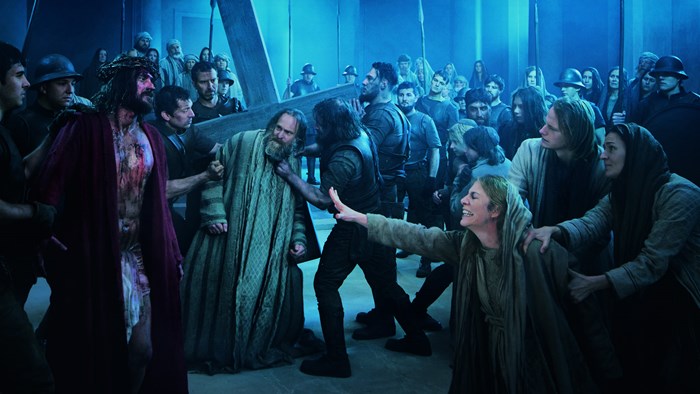 Bavarians rushed to get their hair cut last week as Germany eased some of its toughest coronavirus restrictions and opened barbershops and salons for the first time since December. But Frederik Mayet didn’t join the newly shorn and shaven throngs.

In fact, Mayet plans to keep growing his hair and beard for another year, so he can be more like Jesus.

“With the hair growing,” he explained, “you start to grow into your role as well.”

Mayet will play the starring role of the Savior in the 42nd Oberammergau Passion Play season in 2022, after a two-year pandemic postponement.

The village, about an hour south of Munich, has put on the theatrical reenactment of Christ’s suffering, death, and resurrection every 10 years since 1633, when the town was famously spared from the bubonic plague. In the intervening years, it’s only been canceled a few times: once for the Franco-Prussian War, once for each of the World Wars, and last year, because of COVID-19.

Mayet and more than 2,000 other locals spent months preparing for the 2020 performance, before it—like much of the rest of the world—was unceremoniously canceled by the pandemic.

“We worked really great together as a village being on stage for half a year before the lockdown, and then suddenly, from one day to the next, you don’t see anyone for weeks and months,” Mayet told Christianity Today. “I’m really looking forward to see people coming together again.”

The passion play is now set to run May 14 to October 2 next year. The actors of the village formally began to prepare last month on Ash Wednesday, when director Christian Stückl put out an official “hair and beard decree.”

The decree instructed all the local actors to “let their hair grow out, and the males to also grow a beard.”

Mayet, laughing, said the Bavarian government wanted the reformers to start a little earlier this year.

It’s difficult to say when the hairy tradition began, but “it is a very old tradition,” according to Stückl. He thinks its origins lay sometime in the 1800s. Photos from the Oberammergau archives show participants with robust beards and flowing locks at least as early as 1870.

Stückl said it feels a bit different this year, though, as Germans rush out to get their hair cut and Oberammergau starts to look like a “hippie village.”

Mayor Andreas Rödl, who has been part of the performance from an early age, doesn’t seem to mind. With his previous job as a police officer, Rödl was only eligible for “short-hair roles.” This year, his mane grown long, he’s enthusiastic about performing as part of the choir.

“This is the moment when you can feel the enthusiasm for the Passion Play in the town even more,” said Rödl. “We are definitely excited. And so are the visitors. … We are already 70 percent booked and have more tickets sold at this point in time than we did in 2019.”

That is good news for Oberammergau, where 2,400 of the village’s 5,400 residents either perform on stage or play a supporting role behind the scenes. It’s perhaps even better news for those whose shops, restaurants, hotels, and other tourist services depend on the plays for their bottom line.

Jake Krengel, who runs Bavaria and Beyond tours in Garmisch-Partenkirchen, 30 minutes south of Oberammergau, said the past year has been hard for local tour operators. The UN tourism organization reported a 74 percent decline in global tourism in 2020. The forecast for 2021 remains cautious given continued restrictions and uncertainty around vaccine rollout in Germany and elsewhere.

Nevertheless, Krengel remains optimistic—particularly when it comes to the Passion Play.

“For a lot of people, this is a once in a lifetime trip,” Krengel said, “so we tried to remain flexible and stay in touch as we adjusted to new realities.”

Krengel said that when they offered clients the opportunity to keep their deposits and apply them to a trip in 2022, half of them were immediately ready to recommit.

“There’s a lot of interest in coming back,” he said, “I think people just love to travel and want to get back out and see the world. For others, it’s a religious pilgrimage, so there’s another added significance for them.”

Cindy Friedrich of Apache Junction, Arizona, is one person who was willing to reschedule. A retired church secretary and pastor’s wife, she was part of a church group planning to attend in 2020. Canceling plans was hard, but she’s looking ahead to 2022 now, excited “for the play, the spiritual fellowship, and enjoying God’s creation,” she said.

Some of the original travelers in the group have opted out, though, due to age or health or finances.

“We continue to promote this excursion, but with COVID it is a challenge,” Friedrich said. “I hope the vaccine will make a huge difference. … God is in control of the future and this trip will happen in his time, not man’s.”

While some travelers like Friedrich are hoping to fulfill the plans they made to go in 2020, others see the postponement as an opportunity to make new plans.

Katherine Gross of Gainesville, Florida, did not plan on going to Oberammergau in 2020. But now, with a trip to Germany planned for 2022, she is excited to attend the Passion Play.

“For us the cancellation and postponement was a huge blessing. We feel God has a plan for us because it is working out so nicely with the timing,” said Gross, a financial advisor with Thrivent. “We could not afford to go in 2020, but I had a very good business year, which gave us the ability to go.”

Gross is especially excited to bring her children. She attended the play in 2000, during the 40th season. “I remember when I went 20 years ago,” she said, “it felt like you were there in Jerusalem.”

Things may look and feel a bit different compared to the last time she came. The Passion Play has changed with the times—the script updated to remove the implication that Jews killed Jesus and to add more female roles in the events leading up to Easter—and it may have to make more adjustments for the coronavirus.

Stückl, the play’s director, said they are going to have to wait and see how regulations might alter their plans for attendance or production. Regulations could limit the number of attendees the village welcomes to each of the 103 planned shows. If Germany is still requiring social distancing in 2022, Stückl isn’t sure what that will mean for the many crowd scenes involving the whole cast, including around 500 children.

“On the one hand, it has been difficult,” said Stückl, “but on the other hand with all the preparation we already had for 2020, it’s been easier in some ways.”

Whatever happens, he said, “we continue. We make our way forward.” And he can be sure that this season, Jesus’ beard has a few extra months to grow in.