Officially neutral, Swiss Evangelical Alliance says “relationship to Muslims and support for religious freedom” is now more important than “restrictions to ensure our peaceful coexistence.”
The Associated Press and Jayson Casper|March 11, 2021 10:56 AM 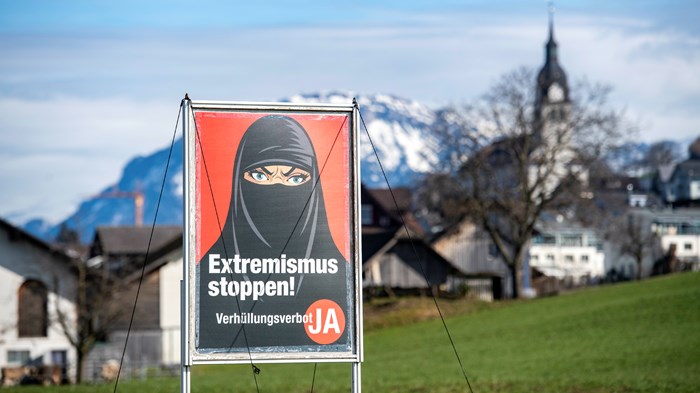 Image: Urs Flueeler / Keystone / AP
A poster supporting the initiative "Yes to a ban on covering the face" is displayed in Buochs, Switzerland, on February 16, 2021.

In a vote that divided Switzerland’s evangelical community, voters narrowly approved on Sunday a referendum to ban face coverings. The new law includes both the niqabs and burqas worn by a few Muslim women in the country, and the ski masks and bandanas used by protesters.

One of two political parties with ties to the Swiss evangelical community supported the Yes vote. The other took no position. The state-affiliated Swiss Reformed and Roman Catholic churches supported the No vote.

After initially supporting the measure, the Swiss Evangelical Alliance (SEA), which represents about 250,000 believers across 650 churches and 230 member organizations, instead issued an orientation paper outlining both the pro and con positions.

“Showing each other our faces … promotes trust and security,” the alliance stated. “But there are legitimate questions if prohibition would restrict religious freedom.”

The measure will outlaw covering one’s face in public places such as restaurants, sports stadiums, public transport, or simply walking in the street. It foresees exceptions at religious sites and for security or health reasons, such as face masks people are wearing now to protect against COVID-19, as well as for traditional Carnival celebrations. Authorities have two years to draw up detailed legislation.

Two Swiss cantons, or states, Ticino and St. Gallen, already have similar legislation that foresees fines for transgressions. National legislation will put Switzerland in line with countries such as Belgium and France that have already enacted similar measures.

The Swiss government had opposed the measure as excessive, arguing that full-face coverings are a “marginal phenomenon.” It argued that the ban could harm tourism—most Muslim women who wear such veils in Switzerland are visitors from well-heeled Persian Gulf states, who are often drawn to Swiss lakeside cities.

Experts estimate that at most a few dozen Muslim women wear full-face coverings in the country of 8.5 million people.

Supporters of the proposal, which came to a vote five years after it was launched, argued that the full-face coverings symbolize the repression of women and said the measure is needed to uphold a basic principle that faces should be shown in a free society like Switzerland’s.

Similarly, the SEA paper stated that “veiling does not generally fit our culture.” But it also warned about the risk to greater integration, as Muslim women may withdraw from public life.

In the end, 51.2 percent of voters supported the plan. There were majorities against it in six of Switzerland’s 26 cantons—among them those that include the country’s three biggest cities, Zurich, Geneva, and Basel, and the capital, Bern. SRF public television reported that voters in several popular tourist destinations including Interlaken, Lucerne, and Zermatt rejected it.

Backers included the nationalist Swiss People’s Party, which is the strongest in parliament. (The two evangelical-related parties hold only a combined 4 of 200 seats.) The committee that launched the proposal is led by a lawmaker from the party, Walter Wobmann, and also initiated a ban on the construction of new minarets that voters approved in 2009.

A coalition of left-leaning parties that opposes the proposal put up signs ahead of the referendum that read: “Absurd. Useless. Islamophobic.”

Wobmann told SRF that the initiative addressed both “a symbol of a completely different system of values ... extremely radical Islam” and security against “hooligans.” He said that “this has nothing to do with symbolic politics.”

Marc Jost, general secretary for the SEA, told CT he believes the majority of evangelicals voted Yes. He noted that Swiss Muslims were also divided on the issue.

He trusts the law will not hurt Christian witness.

“Our relationship to Muslims and support for religious freedom have a high priority,” Jost said.

“Much more important than restrictions to ensure our peaceful coexistence.”