East African nation has no plans in place to accept COVID-19 vaccines.
The Associated Press|March 3, 2021 06:00 AM 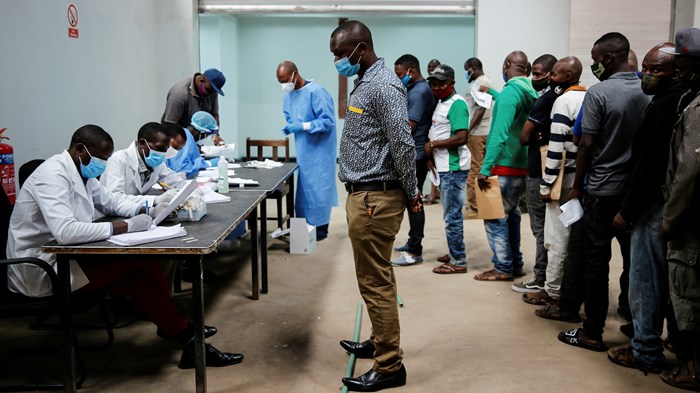 Tanzania’s leader is finally acknowledging that his country has a coronavirus problem after claiming for months that the disease had been defeated by prayer.

Populist President John Magufuli on February 21 urged citizens of the East African country to take precautions and even wear face masks—but only locally made ones. Over the course of the pandemic he has expressed wariness about foreign-made goods, including COVID-19 vaccines.

Last month, the president called on his 60 million citizens for three days of prayer to defeat unnamed “respiratory diseases” amid warnings that the country is seeing a deadly resurgence in infections.

“Maybe we have wronged God somewhere,” Magufuli told mourners at a funeral for his chief secretary, John Kijazi, on February 19. “Let us all repent.”

Though officials in late February announced public health rules similar to other nation’s COVID-19 measures, Magufuli has repeatedly claimed that Tanzania defeated COVID-19 with God’s help. The government has not updated its official number of coronavirus cases since last spring, and the health ministry has promoted unproven herbal remedies.

But the local Catholic church, the US Embassy, and others have openly warned of a resurgence in cases. On February 20, the director general of the World Health Organization (WHO), Tedros Adhanom Ghebreyesus, added his voice to growing calls for Tanzania to acknowledge COVID-19 for the good of its citizens, neighboring countries, and the world, especially after a number of countries reported that visitors arriving from Tanzania tested positive for the virus.

And the death last month of the vice president of the semi-autonomous island region of Zanzibar, Seif Sharif Hamad, brought widespread attention after his opposition political party said he had COVID-19.

Hamad’s death is “a clear symbol this pandemic is raging,“ the director of the Africa Centers for Disease Control and Prevention, John Nkengasong, told reporters on February 18.

Speaking about the deaths of Hamad and Kijazi, Magufuli asked the country to remain calm.

“We managed to defeat these respiratory diseases through prayer last year. I am sure we will do so this year,” he said in the nationally televised event.

Earlier last month, Tanzania’s health ministry said it had no plans in place to accept COVID-19 vaccines, just days after Magufuli expressed doubt about the vaccines without offering evidence.

Health Minister Dorothy Gwajima told a press conference in the capital, Dodoma, on February 1 that “the ministry has no plans to receive vaccines for COVID-19.” Any vaccines must receive ministry approval. It is not clear when any vaccines might arrive, though Tanzania is eligible for the COVAX global effort aimed at delivering doses to low- and middle-income countries.

The health minister insisted Tanzania is safe. During a presentation in which she and others didn’t wear face masks, she encouraged the public to improve hygiene practices including the use of sanitizers but also steam inhalation—which has been dismissed by health experts elsewhere as a way to kill the coronavirus.

Tanzania’s government has been widely criticized for its approach to the pandemic. It has not updated its official number of coronavirus infections—509—since April.

Magufuli asserted in January that vaccines for it are “inappropriate” even as the first significant vaccine deliveries begin to arrive on the African continent.

But authorities in Tanzania, from the Catholic church to government institutions, are pushing back and telling the public and employees that COVID-19 exists in the country and precautions must be taken.

The US Centers for Disease Control and Prevention in a recent travel warning on Tanzania said the country’s level of COVID-19 is “very high.” It gave no details but urged against all travel to the East African nation.

Magufuli previously said God had eliminated COVID-19 in his country.

“Now we have corona. They said bodies will be lying on streets in Africa. But they did not know God loves Tanzania,” the president said at a teacher’s conference last June. “We prayed for three days and the coronavirus is finished.”

His own church begs to differ.

From the local Catholic authority warning in late January of a new wave of coronavirus infections, to government institutions now requiring staffers to take precautions, Magufuli is being openly questioned as the African continent fights a strong resurgence in cases and deaths.

“We are not an island,” the secretariat of the Tanzania Episcopal Conference said in a widely shared statement. It urged followers, which include the president, to pray but also to adopt measures long practiced in the rest of the world, including avoiding public gatherings and close personal contact. The church's newspaper on January 29 stressed in a large front-page headline: “There is corona.”

Tanzania has tried to be an island since April, when it stopped updating its number of virus infections. Some health officials who questioned Magufuli’s stance that COVID-19 had been defeated were fired. The government promoted international tourism, eager to avoid the economic pain of neighbors who imposed lockdowns and curfews.

The president even praised Chinese Foreign Minister Wang Yi for not wearing a face mask during a visit in January, calling it another sign that Tanzania was free of the virus.

But pandemic concerns have returned to the spotlight in Tanzania as the world focuses on the arrival of COVID-19 vaccines.

While other African countries seek millions of doses, Magufuli accused people who had been vaccinated overseas of bringing the virus back into Tanzania. He also questioned whether the vaccines work.

“Be firm,” he added. “Vaccines are inappropriate.” He urged the health ministry not to rush into vaccinations without being satisfied about their safety. He offered no evidence for his claims.

African health officials were already worried about misinformation campaigns around COVID-19 vaccines as the first doses begin arriving on the continent of 1.3 billion people. Magufuli’s stance contrasts sharply with other African heads of state like President Wavel Ramkalawan of the Seychelles, who publicly received his first vaccine shot in January and urged citizens to do the same.

Asked about Tanzania, Nkengasong told reporters on January 28 that “if we do not fight this as a collective on the continent, we will be doomed.“

The WHO’s Africa chief, Matshidiso Moeti, told reporters that “we are re-initiating communication at the highest level of leadership” in Tanzania and seeking the government’s collaboration “for the sake of the people of the country and neighboring countries, as well as for the sake of the world.”

She urged Tanzania to prepare for COVID-19 vaccines, and to share its virus data with the WHO.

Some Tanzanians, from longtime critics of the president to civil society leaders, have issued a new round of exasperated warnings against trying to ignore a global pandemic.

“Tanzanians have the right to vaccination against COVID,” opposition leader Zitto Kabwe tweeted after the president’s comments, saying a government that doesn’t protect its citizens lacks legitimacy. He and others had watched as people took few to no virus precautions during a deeply flawed election that returned Magufuli to power last year.

Others worry that Tanzania is hurting itself and its economy, warning of travel bans against its citizens, the loss of tourism revenue, and dangerous health implications for years.

“By denying the pandemic, Tanzania may well have put itself at the back of a very long waiting list” for vaccines, Aidan Eyakuze, who leads the Twaweza East Africa initiative promoting government transparency, wrote in January for The Citizen local newspaper.

Tanzania’s President Focused on Prayer as ...