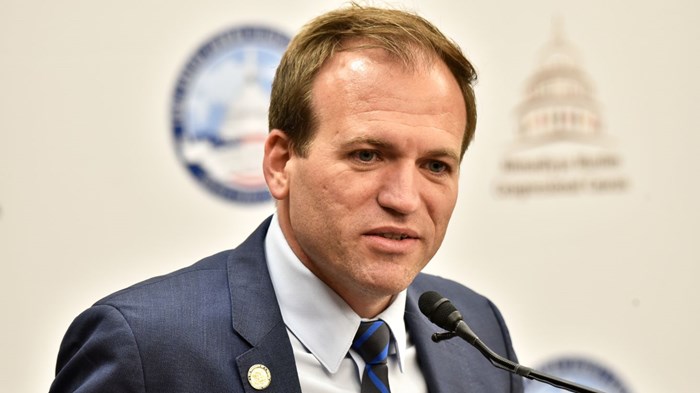 Johnnie Moore called China’s recent decision to bar him from entering the country a “publicity stunt” and a sign that Americans’ continued advocacy on behalf of religious minorities is having an effect.

After concluding his second term serving on the US Commission on International Religious Freedom (USCIRF) earlier this month, the evangelical leader was sanctioned by the Chinese government Wednesday for his outspoken criticism toward what he deemed “the world’s foremost violator of human rights and religious freedom.”

USCIRF’s annual report, released in April, condemned China’s religious freedom violations and designated the country’s abuse of the Uyghur Muslim population as genocide. Moore—head of the PR firm Kairos Group and a faith adviser to former president Donald Trump—has addressed those issues and stood by pro-democracy advocates in Hong Kong, including Catholic businessman Jimmy Lai. Lai was sentenced to prison last month for his role in the 2019 protests.

In a Beijing press conference, Chinese foreign ministry spokesman Zhao Lijian claimed Moore’s advocacy and the recent USCIRF report adopts the “guise” of religious freedom concerns to interfere with Chinese affairs, but really “ignores facts” and is “based on lies,” the state-backed Global Times reported.

The decision to block Moore and his family from entering China, Hong Kong, or Macau was a countermeasure to recent State Department sanctions against a former Chinese official involved in detaining members of the Falun Gong movement, a minority faith which China designates as a cult. China took similar action against USCIRF Chair Gayle Manchin and Vice Chair Tony Perkins in March. That was the first time in USCIRF history that a foreign government had imposed sanctions against individual commissioners.

In this year’s USCIRF report, the commission recommended the US government respond to “deteriorating” conditions in China with targeted financial and visa sanctions on those responsible for religious freedom violations. In his own commentary, Moore called on the US and its allies to stand up to the CCP and stop ignoring its abuses.

“It is an honor to be sanctioned by the Chinese Communist Party for giving my voice to the Uyghur Muslims, Christians (including Jimmy Lai), Tibetan Buddhists & countless others the CCP tries to silence every day—a privilege of living in the United States, the land of the free and the home of the brave,” Moore said in a statement.

He told CT that he believes his evangelical faith and his efforts to build bipartisan support around addressing human rights violations in China were factors in why the government chose him to target.

However, he has no plans to visit the country and sees their efforts to sanction a private citizen as a sign that officials are shaken by the continued criticism coming from the US. “They are weaker than they want us to believe that they are,” he said.

USCIRF chair Gayle Manchin said in an interview with CT in April that the US has a clear understanding of the violations happening there, particularly at forced labor camps.

“It is not only so egregious, but they [Chinese officials] are trying to spread among other nations that what they are doing is okay,” she said. “With China’s overall goal of global power, it is very frightening.”