The original plaque was erected in 1957.

The revised memorial takes a longer view at the well-known story of the missionaries killed by the Waorani.
Megan Fowler|May 25, 2021 09:40 AM
Image: Getty Images
Wheaton’s New Jim Elliot Plaque Does More Than Remove ‘Savage’

A new plaque honoring Wheaton College alumni Jim Elliot and Ed McCully and their fellow slain missionaries will no longer refer to the Waorani as “savage indians” and, at double the word count of the original 1957 inscription, offer a more detailed account of their engagement with the people who killed them.

Wheaton released the updated wording on Monday. The new inscription describes how the missionaries sensed God calling them to reach the Waorani, “a people who had never heard the gospel message. Known for their violence to encroaching outsiders and for internal cycles of vengeance killing, they were among the most feared indigenous peoples in South America at the time.”

The task force who reviewed and revised the plaque wording aimed to move the story—now one of the highest-profile accounts of missionary martyrdom in the 20th century—beyond the events of January 8, 1956.

“Their actions took place at a certain point in time, but we don’t want to leave them there,” said Kathryn Long, professor of history emerita at Wheaton.

The evangelical college pulled the original plaque from Edman Chapel in March, citing concerns from students and community members over its characterization of the Ecuador tribe.

A task force was appointed to review and revise the language for the plaque, which honors the two alumni along with Nate Saint, Roger Youderian, and Pete Fleming. 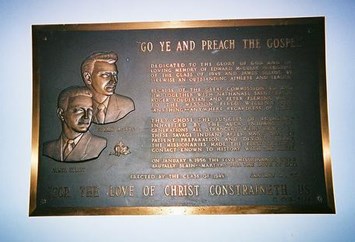 The original plaque was erected in 1957.

The plaque wording task force included Long—author of God in the Rainforest, an account of the five missionaries, their deaths, and the subsequent history of the Waorani—as well as an undergraduate student who spent much of her life living among the Waoroni, an anthropologist, a missiologist, several missionaries, and a member of the Kuna tribe of Panama and Colombia. The task force also consulted with Steve Saint, Nate’s son.

Leading the group was Dr. Beverly Liefeld Hancock, president of the Wheaton Alumni Association, whose mother, Olive, was widowed when her first husband Pete Fleming was killed alongside Elliot.

Hancock said she hoped the rewording would honor the Waoroni people as made in God’s image. She said that the revisions reflect the perspectives of the families of the fallen missionaries as well as Wheaton alumni who serve as missionaries.

Whereas the original plaque concluded with the men’s tragic deaths, the new plaque will highlight the lasting impact of their sacrifice in ways the Wheaton class of 1949 could not have imagined when they donated the plaque in 1957: “Their sacrifice was a turning point for the Waorani and an inspiration for evangelical missions globally. Inviting members of the men’s families to live with them, the Waorani responded to the gospel and put down their spears. God’s redemptive story continues as the gospel is still shared among the Waorani to this day.”

Elisabeth Elliot biographer Lucy Austen noted that the revised language accurately reflects that the story did not end when the five missionaries died. She said that Elisabeth Elliot, whose writings popularized the missionaries’ story, revised her prologue to Through Gates of Splendor over the years to better reflect the ongoing nature of the story.

“I'm pleased to see that the plaque now ends by reminding us that the story did not end in 1956, or at some point between then and now, but continues into the future,” Austen said.

Wheaton plans to dedicate the new plaque in the fall.

“My prayer since starting this has been to tell this story to a new generation in words that are fresh and they can hear,” Hancock said. “This is God’s story, and to see how God has used it is really beautiful.”