After months of leading the school and holding Zoom calls with isolated students, Debra Schwinn will finally celebrate her inauguration.
Adam MacInnis|October 5, 2021 06:00 AM 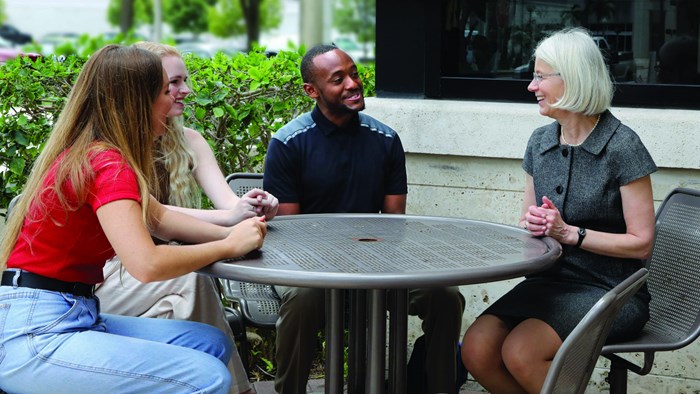 At 5 p.m. every day, students in quarantine at Palm Beach Atlantic (PBA) University get a Zoom call.

The face that pops up on the screen is their school’s new president, Debra Schwinn, checking in on them.

The calls, which ran the entire 2020–2021 school year and have continued this fall, last about 20 minutes. Schwinn chats with the students about how they are doing, prays with them, and offers bits of motherly advice.

For Tom St. Antoine, the faculty representative on the committee that chose Schwinn to be the new leader of the university back in January 2020, it’s a perfect example of the personal approach she has taken since becoming president at the start of the pandemic.

“That just sends such a statement for the president to take time to build relationships and to get to know those students one by one,” he said.

Schwinn’s inauguration was delayed by COVID-19. The ceremony will be held on October 8, but she’s already spent more than a year and a half demonstrating her leadership in trying times at the Florida university with about 2,100 traditional undergraduates, 400 masters students, 350 professional students, and 200 adult students who take evening classes.

Schwinn was not planning to be a pandemic president, but when she thinks about how everything happened, she can’t help but see God’s hand in bringing her to the school: “I think God’s timing was perfect.”

The call to Palm Beach came before COVID-19 was even being talked about.

Schwinn was working as the associate vice president for medical affairs and professor of anesthesiology, pharmacology and biochemistry at the University of Iowa when she got the job offer. She and her husband, Bob, went to a retreat center and isolated themselves in separate rooms and listened for how God would lead them. At the end of it, they came back together with the same answer: Go.

When Schwinn showed up, she brought not only her faith and her pastoral commitment to care for students but also a long history in academic medicine.

“What better, in a time of pandemic, than to have someone of that background,” said St. Antoine. “There’s no way we could have known that, obviously, when we were making our selection. But it’s one of those things that’s let PBA stand out, and I think it’s helped parents, students, and faculty to be confident in our leadership.”

Schwinn’s first challenge, in May, was to put in place a plan to test and trace the spread of the coronavirus. Her medical background proved invaluable in weighing options and evaluating different plans.

In July, she faced another critical issue. Schwinn had to help the university decide whether to open in-person classes in the fall or move everything online, as so many schools and workplaces were choosing to do.

“The COVID rates were ticking so dramatically high in West Palm Beach and West Palm Beach County that we called a day of prayer, and for an entire day we listened,” she said.

In addition, she and other administrators at the school asked for the advice and prayers of alumni, students, families, churches, staff, and others. When they heard back, they felt like they had a clear answer.

“What we heard God say was that ‘there has never been a more important time in the history of this country than today for the kind of transformative education that you have at Palm Beach Atlantic University. Open. I’m not going to give you all the answers today, but open, have courage, and keep asking the questions,’” Schwinn said.

But Schwinn said she knew that God would want the school to be responsible too, so she and the staff developed an extensive safety plan, including masking requirements for large events and encouragement to follow Centers for Disease Control and Prevention guidelines at smaller gatherings. Desks were spread apart for social distancing, and professors’ podiums were equipped with Plexiglas shields.

Perhaps most importantly, the school instituted a testing regimen, checking all students for COVID-19 when they arrived in the fall, transparently reporting cases online, running contact traces to quickly catch exposure, and developing careful plans for quarantining students who became infected or were potentially exposed and waiting for test results in an old residence building.

“We opened with prayer, and we followed science,” Schwinn said. “It was definitely a combination.”

As a result, the percentage of cases on campus was lower than the surrounding community, Schwinn said.

This year, the percentage of tests that came back positive for COVID-19 at the start of the semester was a bit under 9 percent, and then dropped steadily from the end of August to September. Currently, Florida’s positivity rate is at about 9 percent. The university’s is just under 3 percent.

The isolated students were able to keep up with classes through a “HyFlex” system, which put almost every in-person class on Zoom simultaneously. Students in the old dorm—dubbed “COVID Camp”—were cared for by a health team.

Schwinn also started checking in on them every day.

Initially, the idea was to make sure the systems in place were working properly. Were they being cared for? Could they really participate in their classes? But Schwinn soon found her medical and mothering backgrounds kicking in.

“I found that I loved it, so I continued it after I knew our systems were working well,” she said. “I have a chance to kind of be a surrogate mother.”

She would also encourage them to take the time to draw closer to God. Prayer was a daily part of the 5 p.m. calls.

“Many students feel touched by God during their time alone,” Schwinn said.

Umberto Rosi, who came to PBA from Italy, contracted COVID last spring. Being thousands of miles away from family, he said it was a challenging time, so he was thankful for Schwinn’s caring calls. The mix of empathy and knowledge she brought to the conversations meant a lot to him and the other students.

“She doesn’t just see you as a student. She sees you as a person, and we love that,” he said.

While she never had to personally quarantine, PBA student body president Abbi Michaeli heard from many who loved the personal role Schwinn took.

“Students that are isolating can get lonely at times, so the fact that she does that means the world to them,” she said.

“Her background has made me and other students feel better about her decisions for the campus because she makes Christian and medical decisions that have the students’ best interest at heart.”

COVID-19 aside, St. Antoine is excited about the direction Schwinn is leading the university.

“I always think of PBA as the Christian college for the next century,” St. Antoine said. “We‘re urban. We’re young. We’re innovative. We have programs in health care and other areas that Christian colleges don’t always have. But, at the same time, we haven’t forgotten our emphasis in the liberal arts, character formation, spiritual formation, those kinds of things. In a lot of ways Dr. Schwinn embodies that.”

Schwinn, for her part, is excited to one day lead the university without having to deal with a pandemic, though she will miss the 5 p.m. Zoom calls.