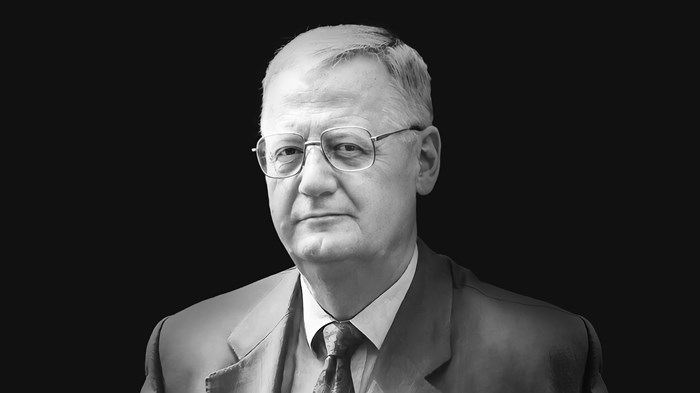 Eberhard Jüngel, the leading Protestant theologian to emerge out of Stalinist East Germany, died on Tuesday at age 86.

Jüngel’s work was never popularized, and he was overshadowed in some ways by his peers and colleagues—notably Jürgen Moltmann, Hans Küng, and the future Pope Benedict XVI, Joseph Ratzinger. As a philosophical theologian, his scholarship could seem “out of joint,” one scholar noted, with contemporary concerns and popular trends.

But the theologians who did discover Jüngel were often drawn in by his dense arguments and intense focus on God’s self-revelation, the centrality of the Trinity in understanding God, and the importance of the doctrine of justification by faith.

His passing was mourned by his former students in Germany, including the Protestant bishop and popular religion columnist Petra Bahr.

“Scholars of heaven, brace yourselves,” Bahr wrote on Twitter. “There will be long nights.”

Jüngel was born in December 1934 in Magdeburg, about halfway between Hanover and Berlin, immediately after Adolf Hitler consolidated power. Jüngel’s childhood was dominated by World War II. Then in 1945, Magdeburg was liberated by US soldiers. When the Allied powers portioned out responsibility for the defeated Germany, however, Magdeburg was turned over to Russian forces. The country divided, and East Germany aligned itself with the Soviet Union and Josef Stalin.

As a teen Jüngel struggled with the totalitarian state. He wanted to explore the intellectual horizons and that was forbidden.

“The socialist ideals were implemented by a kind of power politics,” he later said. “One can argue about the ideals of socialism. But that also entails the possibility of arguing against them. And precisely this was not allowed.”

Jüngel’s one reprieve was the Protestant church. In church, he was allowed to think, explore, debate, and discuss ideas. Church became the one place where he could pursue the truth.

Jüngel decided he wanted to become a pastor and theologian.

The decision surprised his mother, who was mildly devout and taught her four children to pray at the appropriate times, but did not think ministry was a good career choice. It baffled his father, who was not a Christian and had nothing but ridicule for theology, Jüngel told The Christian Century in 1990.

The decision also angered people at school. When Jüngel was 18, he was denounced as an “enemy of the republic,” along with a group of fellow Christians, and expelled from school. He was not allowed to take the exam to enter university. Jüngel instead enrolled in a church school in Berlin.

Later, when he and other post-war theologians debated whether theology should be political, Jüngel would come back to this experience.

“The political relevance of Christian faith consists, from beginning to end, in its ability and obligation to speak the truth,” he said. “The political activity required of the church aims, above all else, to assist the cause of truth.”

Jüngel studied theology in East Berlin, pursuing a doctorate. In 1957, he managed to leave for an illegal year abroad. He went to Switzerland to study with the theologian Karl Barth and made regular trips to Freiburg, where he studied with the philosopher Martin Heidegger.

He was deeply influenced by both men.

Heidegger, he said, taught him that philosophy should be theological.

“Toward the end of his life,” Jüngel wrote, “I had a conversation with Heidegger about the relation between thought and language, and I asked whether it wasn’t the destiny of thought to be unterwegs zu Gott (on the way to God). He answered: ‘God—that is the most worthy object of thought. But that’s where language breaks down.’”

Jüngel agreed about the importance of thinking about God, but rejected the idea that is impossible to articulate. While it is true, he thought, that humans cannot comprehend God by their own intellectual powers, God had been revealed to humanity. Barth taught him to concentrate his thinking on Jesus.

The young theologian returned to Berlin and finished his doctorate in 1961. He was immediately thrown into teaching. The Protestant bishop made him a lecturer at the church school when the Berlin Wall divided the city, and students in the East were separated from the classrooms and professors in the West.

He turned his attention the philosophical problem of the human comprehension of God. Some German theologians at the time were arguing that God could only be known subjectively, through human experience. They argued God is fundamentally pro nobis (for us), and theologians should not describe the divine as an independent reality. Others countered that God is objective, and in essence pro se (for himself), and theologians err when they make God too accessible.

Jüngel rejected both these positions, pointing out that God is most fully revealed in the crucifixion of Jesus. In that historical event, God was fully pro se and pro nobis, with the truth of the one fulfilling the truth of the other.

“Jüngel envisages the cross as the supreme act of relation: The relation of God the Father to God the Son in the Spirit’s power, and the relation of the triune God to sinful humanity,” wrote theologian John Webster. “Although God comes always ‘from himself, to himself and through himself,’ he nevertheless comes ‘to the world and to humans.’ Indeed, God comes ‘as the mystery of the world by showing himself as the human God.’”

In 1969, Jüngel left East Germany and went to the University of Tübingen, near Stuttgart. The university was seen at that moment as the center of the universe of academic theology. Jürgen Moltmann had just been appointed professor of systematic theology and published his seminal work, Theology of Hope. Joseph Ratzinger held a chair in dogmatic theology and was intimately involved with the Second Vatican Council, addressing the Catholic Church’s relationship to the modern world.

Jüngel became close friends with Moltmann and Hans Küng, though he only briefly interacted with Ratzinger. He liked to have theologians over to his book-crammed apartment on a hill overlooking Tübingen, and talk about theology late into the night.

Jüngel was a popular teacher, filling university lecture halls. He said he thought this was because he was “a good comedian,” but also noted that many of his students came away from his classes confused. Real thinking, he said, echoing Heidegger, is not an easy task.

Jüngel’s last major theological intervention came in the late 1990s, when he led opposition to an ecumenical accord between Lutherans and Catholics. Jüngel urged the German churches to reject the document, or at least acknowledge there was no consensus on justification by faith.

A few years later, Jüngel published a book on justification, calling it the cornerstone of Christian theology.

Jüngel stayed at Tübingen until 2003, when he retired. He then took a position at a research institute at Heidelberg University, a few hours north, and in 2007 accepted the Hans-Georg Gadamer Chair in Theology.

He continued to read and write theology, but also had more time for hiking and crime shows. Jüngel never married, and he had no children. Funeral arrangements have not yet been made public.