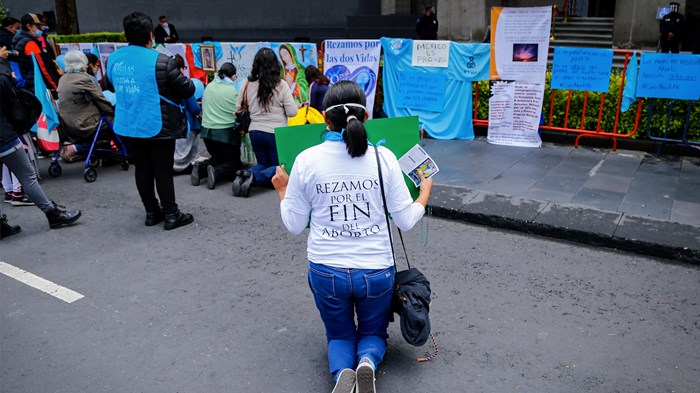 Mexico’s Supreme Court ruled Tuesday that it is unconstitutional to punish abortion, unanimously annulling several provisions of a law from Coahuila—a state on the Texas border—that had made abortion a criminal act.

The decision will immediately affect only the northern border state, but it establishes a historic precedent and “obligatory criteria for all of the country’s judges,” compelling them to act the same way in similar cases, said court President Arturo Zaldívar. “From now on you will not be able to, without violating the court’s criteria and the constitution, charge any woman who aborts under the circumstances this court has ruled as valid.”

Those circumstances will be clarified when the decision is published, but everything points to that referring to abortions carried out within the first 12 weeks of a pregnancy, the period allowed in the four states where abortion is already legal.

The decision comes one week after a Texas law took effect prohibiting abortions once medical professionals can detect cardiac activity in the fetus. It allows any private citizen to sue Texas abortion providers who violate the law, as well as anyone who “aids or abets” a woman getting the procedure.

Only four Mexican states—Mexico City, Oaxaca, Veracruz, and Hidalgo—now allow abortion in most circumstances. The other 28 states penalize abortion with some exceptions.

Mexico is a heavily Roman Catholic country. The church was a powerful institution through colonial times and after Mexico’s independence, but a reform movement in the mid-19th century sharply limited the church’s role in daily life. Anticlerical efforts at times led to bloodshed, especially during the Cristero Rebellion from 1926 to 1929.

The topic of abortion still remains controversial in Mexico, however. The divide was on display Tuesday as groups from both sides demonstrated outside the court.

Dozens of people kneeled in prayer in front of the court. Christian pro-life demonstrators gripped rosaries, held blue balloons, and displayed signs with messages like, “Let’s Save Both Lives.”

The conservative National Action Party reiterated its opposition to abortion. “We are in favor of the defense of life from conception and until natural death,” the party said in a statement. It asked that conscientious objection be protected “for ethical, moral, or religious motives.”

President Andrés Manuel López Obrador of the Morena party declined Tuesday before the decision to comment on the topic, saying only that it was for the court to decide. López Obrador describes himself as “a Christian in the broadest sense of the word,” declining to offer more specific when asked about his Protestant or Catholic ties.

The Mexican Episcopal Conference sent a series of messages via Twitter citing previous comments by church leaders. One was from earlier this year before a vote decriminalizing abortion in the state of Hidalgo. “May your decision for life not be conditioned by an ideology, but rather motivated by faith, hope and love,” it read.

“We’re seen as a Catholic people, as a Guadalupano people,” said law professor Leticia Bonifaz of the National Autonomous University of Mexico. “But if you notice today, the issue being discussed is legal, not religious, not moral.”

Bonifaz said this Supreme Court is more liberal than the one that decriminalized abortion in Mexico City in 2007. In the intervening years, there has been extensive education for not only the justices, but the lawyers who make up their teams from the perspectives of gender and human rights, she said.

Lawyer and activist Verónica Cruz, director of the collective “Las Libres,” or “The Free,” said the decision “tears down barriers” by sending the message that women cannot be charged for abortions.

There are currently no women imprisoned for abortions in Mexico, but there are some 4,600 open investigations for it, said Cruz, whose organization freed the last women who had been in prison for it.

For a long time, significant changes for Mexican society were ushered through the legislative branch, but more recently the “Mexican justice system has been a vanguard justice system on many issues,” Bonifaz said.

The historic case seemed to leap into the public’s consciousness overnight, but in reality it had been moving through the legal system for four years, said Bonifaz. Former Attorney General Raúl Cervantes had challenged its constitutionality before stepping down in 2017.

In previous decisions, the Supreme Court ruled in favor of women who had been imprisoned or had their rights violated for abortions. But Rebecca Ramos, director of the nongovernmental reproductive rights group GIRE, said the latest case was the first time the justices debated the fundamental question of whether abortion should be considered a crime or not.

The decision could potentially open another option for Texas women seeking legal abortions. For years, some women in south Texas have crossed the border to go to Mexican pharmacies to buy misoprostol, a pill that makes up half of the two-drug combination prescribed for medical abortions. Legal abortions could become accessible now along Mexico’s long shared border with Texas.