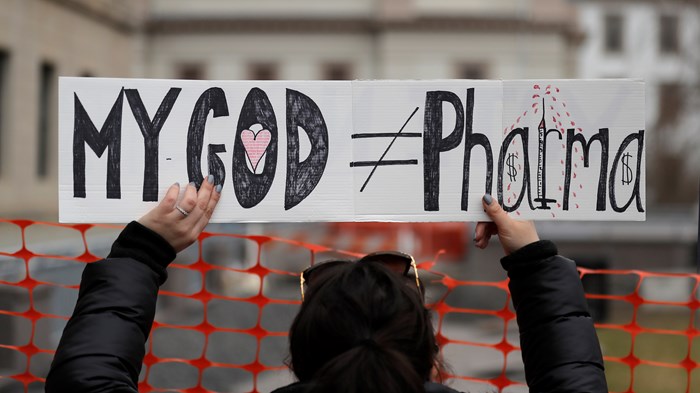 About 3,000 Los Angeles Police Department employees are citing religious objections to try to get out of the required COVID-19 vaccination. In Washington state, hundreds of state workers are seeking similar exemptions. And an Arkansas hospital has been swamped with so many such requests from employees that it is apparently calling their bluff.

Religious objections, once used sparingly around the country to get exempted from various required vaccines, are becoming a much more widely used loophole against the COVID-19 shot.

And it is only likely to grow following President Joe Biden’s sweeping new vaccine mandates covering more than 100 million Americans, including executive branch employees and workers at businesses with more than 100 people on the payroll.

The administration acknowledges that some small minority of Americans will use—and some may seek to exploit—religious exemptions. But it said it believes even marginal improvements in vaccination levels will save lives.

It’s not clear yet how many federal employees have requested a religious exemption. The Labor Department has said an accommodation can be denied if it causes an undue burden.

In the states, mask and vaccine requirements vary, but most offer exemptions for certain medical conditions or religious or philosophical objections. The use of such exemptions, particularly by parents on behalf of their schoolchildren, has been growing over the past decade.

The allowance was enshrined in the federal Civil Rights Act of 1964, which says employers must make reasonable accommodations for employees who object to work requirements because of “sincerely held” religious beliefs.

A religious belief does not have be recognized by an organized religion, and it can be new, unusual or “seem illogical or unreasonable to others,” according to rules laid out by the Equal Employment Opportunity Commission. But it can’t be founded solely on political or social ideas.

That puts employers in the position of determining what is a legitimate religious belief and what is a dodge.

Many major religious denominations have no objections to the COVID-19 vaccines. But the rollout has prompted heated debates because of the longtime role that cell lines derived from fetal tissue have played, directly or indirectly, in the research and development of various vaccines and medicines.

Roman Catholic leaders in New Orleans and St. Louis went so far to call Johnson & Johnson’s COVID-19 shot “morally compromised.” J&J has stressed that there is no fetal tissue in its vaccine.

Moreover, the Vatican’s doctrine office has said it is “morally acceptable” for Catholics to receive COVID-19 vaccines that are based on research that used cells derived from aborted fetuses. Pope Francis himself has said it would be “suicide” not to get the shot.

In New York, state lawmakers attempted to make the vaccine mandatory for medical workers, with no religious exemptions. On Tuesday, a federal judge blocked the rule because it lacked the opt-out.

Among white evangelical Protestants, the religious group least likely to have been vaccinated, 33 percent say they will not get the shot.

Across the US, public officials, doctors, and community leaders have been trying to help people circumvent COVID-19 mask and vaccine requirements.

In Tulsa, Oklahoma, pastor Jackson Lahmeyer is offering a “religious exemption” form on his church’s website for download, along with links for suggested donations to the church. The 29-year-old is running for the US Senate.

Anyone interested can get the form signed by a religious leader. He said on Twitter that more than 14,000 people have downloaded it. He wrote that what was amazing was “how many pastors refuse to sign the form for members in their church.” He said he can sign if someone joins the church and donates.

“Currently, there are two legally recognized exemptions from a mandatory vaccination: medical reasons and sincerely held religious beliefs. When presented with notice of a religious exemption, some employers have requested the employee provide support from the church he/she attends. This, of course, is troublesome for a number of reasons,” Cole said. “…according to the EEOC, the individual, not the church he or she attends, holds the ‘sincerely held religious belief’ that may be the basis for refusing vaccination. As such, it is the individual’s right to advise his/her employer of that belief, and not a requirement of the church he/she may attend.”

Some private employers are taking a hard line. United Airlines told employees last week that those who obtain religious exemptions will be put on unpaid leave until new coronavirus testing procedures are in place.

In Los Angeles, Police Chief Michel Moore said he is waiting for guidance from the city’s personnel department regarding the exemptions. The city has mandated that municipal employees get vaccinated by Oct. 5 unless they are granted a medical or religious exemption. A group of LAPD employees is suing over the policy.

“I can’t and won’t comment on the sincerity level” of people claiming a religious exemption, the police chief said. “I don’t want to speculate. Religion in America has many different definitions.”

Ten LAPD employees have died of COVID-19, and thousands in the department have been infected.

In Washington state, approximately 60,000 state employees are subject to a mandate issued by Gov. Jay Inslee that they be fully vaccinated by Oct. 18 or lose their job, unless they obtain a medical or religious exemption and receive an accommodation that allows them to remain employees.

As of Tuesday, more than 3,800 workers had requested religious exemptions. So far, 737 have been approved, but officials stressed that an exemption does not guarantee continued employment.

Once the exemption is approved, each agency has to evaluate the employee’s position and whether the person can still do the job with an accommodation while ensuring a safe workplace. Seven accommodations so far have been granted.

In Arkansas, about 5 percent of the staff at the privately run Conway Regional Health System has requested religious or medical exemptions.

The hospital responded by sending employees a form that lists a multitude of common medicines—including Tylenol, Pepto-Bismol, Preparation H, and Sudafed—that it said were developed through the use of fetal cell lines.

The form asks people to sign it and attest that “my sincerely held religious belief is consistent and true and I do not use or will not use” any of the listed medications.

In a statement, Conway Regional Health President and CEO Matt Troup said: “Staff who are sincere … should have no hesitancy with agreeing to the list of medicines listed.”