Surveys show evangelical identity holding steady over the last presidency, but with more complicated partisan connotations for the church.
Kate Shellnutt|September 16, 2021 06:30 AM
简体中文繁體中文 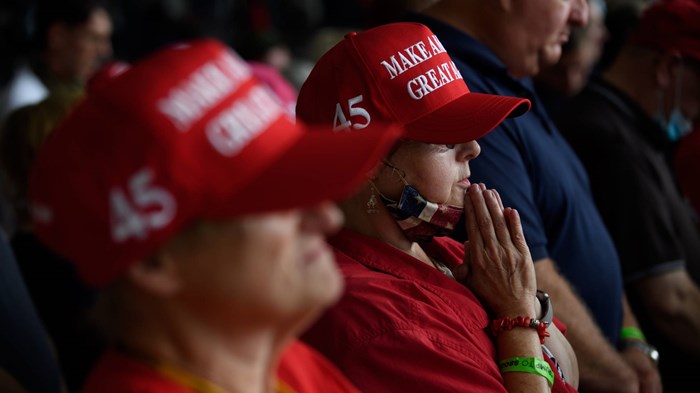 Despite tense polarization, there was no mass exodus from evangelicalism by white evangelicals who disliked Donald Trump nor by evangelicals of color during the four years of his presidency, Pew Research Center found.

According to analysis released Wednesday, more Americans started identifying as born-again or evangelical Protestants between 2016 and 2020 than stopped calling themselves evangelicals. The boost came almost entirely from white Trump supporters.

Among those who didn’t consider themselves evangelicals when the former president was elected, nearly 1 in 6 had begun identifying as evangelicals by 2020. Just 1 percent of white Americans who did not favor Trump made the same switch.

The findings complicate an already fraught discussion around the future of the evangelicalism and the political baggage the label carries in the United States.

“Evangelicalism is not collapsing, despite the enthusiastic predictions of its detractors. However, what it is becoming I think is worthy of more conversation,” said Ed Stetzer, executive director of the Wheaton College Billy Graham Center. “There are significant implications to the fact that significant numbers of white Trump supporters now identify as evangelical or born again. We don’t know why, and correlation does not always mean causation, but there is more to study here.” 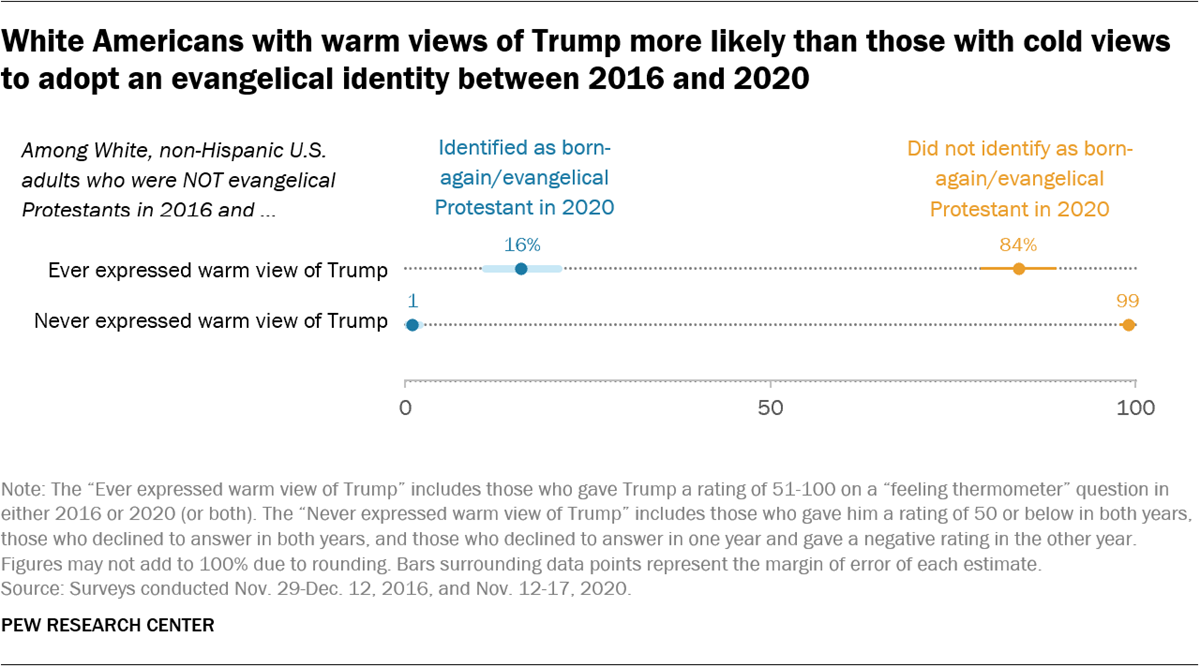 In the past two presidential elections, white evangelical Protestants made up a core voting bloc for Trump, as they did for previous Republican candidates, including Mitt Romney, John McCain, and George W. Bush. But “just 30% of non-White voters who identify as born-again or evangelical Protestants (including just 12% of Black evangelical voters) reported casting a ballot for Trump” in 2020, researchers wrote.

Still, evangelical identity among people of color held steady in the Pew survey. Non-white respondents were just as likely to drop the evangelical label during Trump’s term in office as they were to adopt it. Around a quarter identified as born-again or evangelical in both 2016 and 2020.

Among white evangelicals, although slightly more Trump opponents had given up their evangelical identity in recent years compared to Trump supporters, the difference was not statistically significant since it fell within the margin of error, Pew researchers wrote.

To historian Thomas Kidd, the possibility that Americans began calling themselves evangelical simply because they backed president Trump “should be of concern to all pastors and committed churchgoers.”

His 2019 book Who Is an Evangelical?: The History of a Movement in Crisis argues that the popular connotation that evangelicals are white Republicans—or white Republican Trump supporters—fails to capture the historic and current breadth of the movement. It was released in the midst of a renewed debate over the evangelical label following the 2016 election.

“There are good reasons for churches to continue to describe themselves as ‘evangelical,’ if by that term they are referencing their historic commitment to the Bible's authority, the necessity of spiritual conversion, and the felt presence of God in daily life,” Kidd said this week.

“But pastors in particular should realize that the meaning they attach to evangelical may not be the same as that of some in their congregation. I suspect most pastors would not want to inadvertently signal to their congregations that they are effectively branch offices of Donald Trump’s GOP, simply by making undefined use of the term evangelical.”

While many evangelicals and evangelical institutions see their movement in theological terms, to the point that Christian pollsters have tried to break out evangelicals by belief rather than self-identity, the label has taken on a political dimension over decades of polling, media coverage, and the partisan involvement of evangelicals themselves.

“But what if a gap between what we claim to be and what we support politically emerges? The Trump administration raised these questions in new and unusual ways,” said Mark Caleb Smith, director of the Center for Political Studies at Cedarville University. “If the Pew study holds up, and is confirmed by other data sources, it presents the challenge in a new light. Is it possible that people not within the religious tradition of evangelicalism are only ‘political evangelicals’? Does this reflect poorly on us?”

Trump embraced the support of dozens of evangelical leaders, ranging from prominent Southern Baptist pastors to prosperity preachers popularized on TBN like his longtime friend Paula White-Cain. While a swath of Christians decried Trump’s character, others celebrated how his administration defended religious freedom, the pro-life cause, and conscience protections. (And some Christians did both.)

After the 2016 election, analyses of voter surveys indicated that Clinton voters were more likely than Trump voters to disaffiliate, but not dramatically. In 2018, the General Social Survey found that, even with the divide over Trump and growing numbers of unaffiliated Americans, the evangelical share of the population in the US continued to hold steady, as it had for a decade.

Smith at Cedarville says the social and political overtones to evangelicalism in America may be unavoidable, which becomes a challenge if they interfere with the mission of the church.

“My concern is that this shift might make it more difficult to present ourselves as ambassadors for Christ. Will those who disagree with our politics dismiss us theologically out of hand? If so, this presents real problems for who we are,” he said. “The Great Commission still beckons us, but our culture is so politicized and polarized that spreading the gospel under what is seen as a political banner becomes much harder.”