(UPDATED) Traditionalist minority worry disagreement on the issue will make it harder to work together on mission.
Kate Shellnutt|May 23, 2022 01:00 PM
简体中文繁體中文 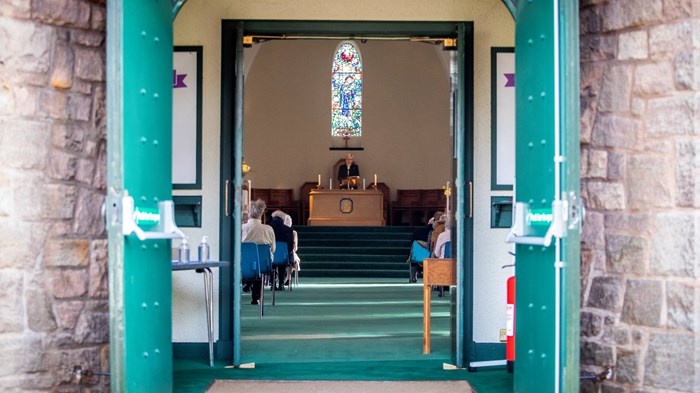 Update (May 23): Church of Scotland ministers are now permitted to perform same-sex marriages if they choose.

The church’s General Assembly approved an overture that allows parish ministers and deacons to apply for authorization to marry same-sex couples. It passed on Monday by a 274-136 vote.

The Presbyterian denomination is preparing new suggested liturgy to bless same-sex marriages as well as guidance for the change in church law.

Those in favor of same-sex marriage have celebrated the move as welcoming, but others in the church fear that even though they would not be forced to participate, the move puts pastors who oppose same-sex marriage in a more difficult position.

“When asked, ‘Can you marry us?’, the answer will have to be, ‘No, because I choose not to,’ rather than, ‘No, that’s something that I cannot do,’” Ben Thorpe, a minister at Sandyford Henderson Memorial Church in Glasgow told The Independent, “and that creates pastoral difficulties as well for everyone on both sides of the debate.”

The moderator of the Church of Scotland General Assembly, Iain Greenshields, acknowledged the diversity of beliefs on the issue among the church, which has debated the move for years, as well as the pastoral implications.

He advised that “all celebrants would be expected to take account of the peace and unity and pastoral needs of the congregation and any parish or other grouping of which it is a part while considering to conduct a same-sex marriage ceremony."

Original post (April 29): The Church of Scotland—the largest Protestant church in the country—is another step closer to allowing its ministers to officiate same-sex weddings.

The majority of the denomination endorsed draft legislation to let clergy marry same-sex couples, with 29 presbyteries in favor and 12 opposed. The proposal will go before its General Assembly gathering in Edinburgh in May for approval.

While clergy will not be required to marry same-sex couples, the move makes the minority who oppose the national church’s involvement in gay marriage worried about further division.

“There’s still a continued struggle within the Church of Scotland,” Mike Goss, a minister in the presbytery of Angus who opposed the change, told Premier Christian News. “The group of folk are called traditionalists, folk who stand by the Bible, we’re not going away. We’re still there.”

The traditionalist wing of the church has debated its response to the moves toward affirming same-sex marriage for years. Even as the Presbyterian church prepares to allow the practice, the denomination’s official stance recognizes the tension.

“The Church recognises that there are diverse views on the subject of same-sex marriage,” it says. “We are committed to ensuring that debates on this subject are held in a spirit of humility and grace, that the tone and tenor of discussions are civil and people are respectful of those who hold opposing views.”

Scotland legalized civil partnerships for same-sex couples in 2005 and marriage in 2014. The Church of Scotland—also known by its Scottish name, Kirk—endorsed clergy in same-sex relationships back in 2009 but so far has not allowed ceremonies to take place in its churches.

Nigel Kenny, the Scotland officer for the UK-based Christian Institute, criticized the Church of Scotland’s move away from defining marriage as between a man and woman. “This is a very sad development in the life of the National Kirk, which has in its constitution a commitment to the Bible as the supreme authority in all matters of faith and practice,” he stated.

The trend toward LGBT inclusion among Europe’s mainline churches, including the Church of Scotland, has corresponded with ongoing membership decline, according to Evangelical Focus.

According to government statistics, half of adults in Scotland report no religious affiliation and just under a quarter (22%) say they belong to the Church of Scotland, which is the national church but is not state run. The report also showed just 2 percent of the population claiming LGBT affiliation.

But church attendance is aging and shrinking. Back in 2002, 12 percent of the Scottish population attended Church of Scotland services; by 2016, it was 7 percent, according to the Scottish Church Census by UK-based Brierley Consultancy. Meanwhile, turnout at Pentecostal churches doubled—standing out as the only tradition to see growth.

Even with the decline among the Church of Scotland, it remains ten times larger than any other Protestant body. The Free Church of Scotland (formed by a schism with the national church in the 19th century) is a smaller evangelical Presbyterian denomination of over 100 congregations and holds to a traditional view of marriage.

Within the Church of Scotland, traditionalists worry that disagreement over same-sex weddings will affect other areas of church life. Faced with continued decline, the church has been reassessing its mission by considering new expressions of church and new approaches to engagement that involve restructuring its presbyteries.

“I guess the struggles will be with the continued relationships between congregations and between ministers,” Goss said. “We’re in the middle of a vast process of change that's been called the Presbytery Mission Planning process, and that’s going to require a lot of ministers working together, and this is just another spanner in that process, making it harder to know how we work together.”