Pysanky and Prayer: US Churches Use Ukrainian Easter Eggs for Solidarity

Though American churches are trying out the art of making pysanka, Ukrainian Christians say it is not a religious tradition.
Emily Belz|April 8, 2022 09:17 AM 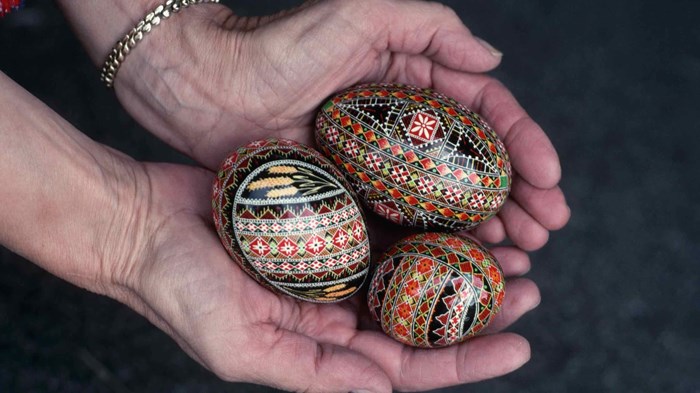 To do the ancient Ukrainian practice of pysanky, you need a strong, smooth egg and a lot of patience.

North American churches are taking up the delicate egg decorating art form, dating back thousands of years, as a way of showing solidarity with and raising money for war-torn Ukraine ahead of Easter.

A number of Episcopal churches in the United States have hosted pysanky events as a “form of prayer” for Ukraine. A Catholic community in Ontario, Canada, said it would begin doing pysanky on Sunday afternoons as “a contemplative activity offered for our suffering world.” A church in Connecticut planned an afternoon decorating pysanka eggs (pysanka is the singular form of pysanky) combined with a prayer vigil.

Several American churches have interpreted the Ukrainian cultural practice spiritually: that it has the power to keep evil at bay, or that the egg symbolizes new life and Christ’s resurrection, or that it is a “Lenten tradition.”

But according to Ukrainian Christians, the art of pysanky does not have spiritual significance on its own. It is a pre-Christian cultural practice from the region.

Joan Brander, a Ukrainian Canadian pysanky artist who has written books on the art form, told CT she considers the tradition purely Ukrainian with no religious connotation.

Zlata Zubenko, a Ukrainian American and a Christian, also considers the art of pysanky as more of a folk tradition and a symbol of Ukrainian national identity.

Some Ukrainian sources noted that the cultural practice is more associated with Orthodox Easter traditions.

Pastor Michael Cherenkov, who grew up in Ukraine and now pastors a Baptist church in Washington state, said evangelicals don’t usually make pysanka eggs as a religious tradition but it is an Easter symbol within Orthodox Christianity.

Anna Grot, a Ukrainian American who works at the ministry World Challenge, also agreed that if pysanky has any religious significance it is generally considered a more Orthodox tradition. “It’s more a cultural thing that goes back to the times even before Christianity reached Kyiv,” she said.

In addition to churches, art museums across the US are also doing pysanky exhibits. The Ukrainian Museum in New York said pysanky is a way to celebrate Ukrainian culture “at a time when its existence is being threatened.” The Dayton Art Institute in Ohio also recently put up a pysanky display, including a broken one to show how fragile they are.

Since making one egg takes hours, pysanky can be a therapeutic activity when news is overwhelming and the Ukrainian diaspora feels powerless to help their homeland. People often do pysanky together, “kind of like a quilting party where you get together and chat,” said Maryann Bacsik, whose family has made pysanky for generations.

This weekend, Bacsik and her daughter Tamara were hosting a pysanky workshop at their New Jersey church, St. John the Baptist Russian Orthodox Church. Many people in the church are Carpatho-Rusyn, an ethnicity based around southeastern Poland, northeastern Slovakia, and western Ukraine.

Tamara remembers late nights decorating eggs at the home of friends after Vespers services at her church during Lent. She would usually make about a dozen pysanky, and in her church people will exchange pysanky with their friends.

“It’s a tradition that's always been in our church … passed down from the generations that came came over from the old country,” said Tamara. This is the first year the Bacsiks are doing a public workshop at their church, although Maryann has taught pysanky at local schools.

“People in the community are looking for opportunities to … connect somehow with the culture, to understand a little bit more about the history,” said Tamara. 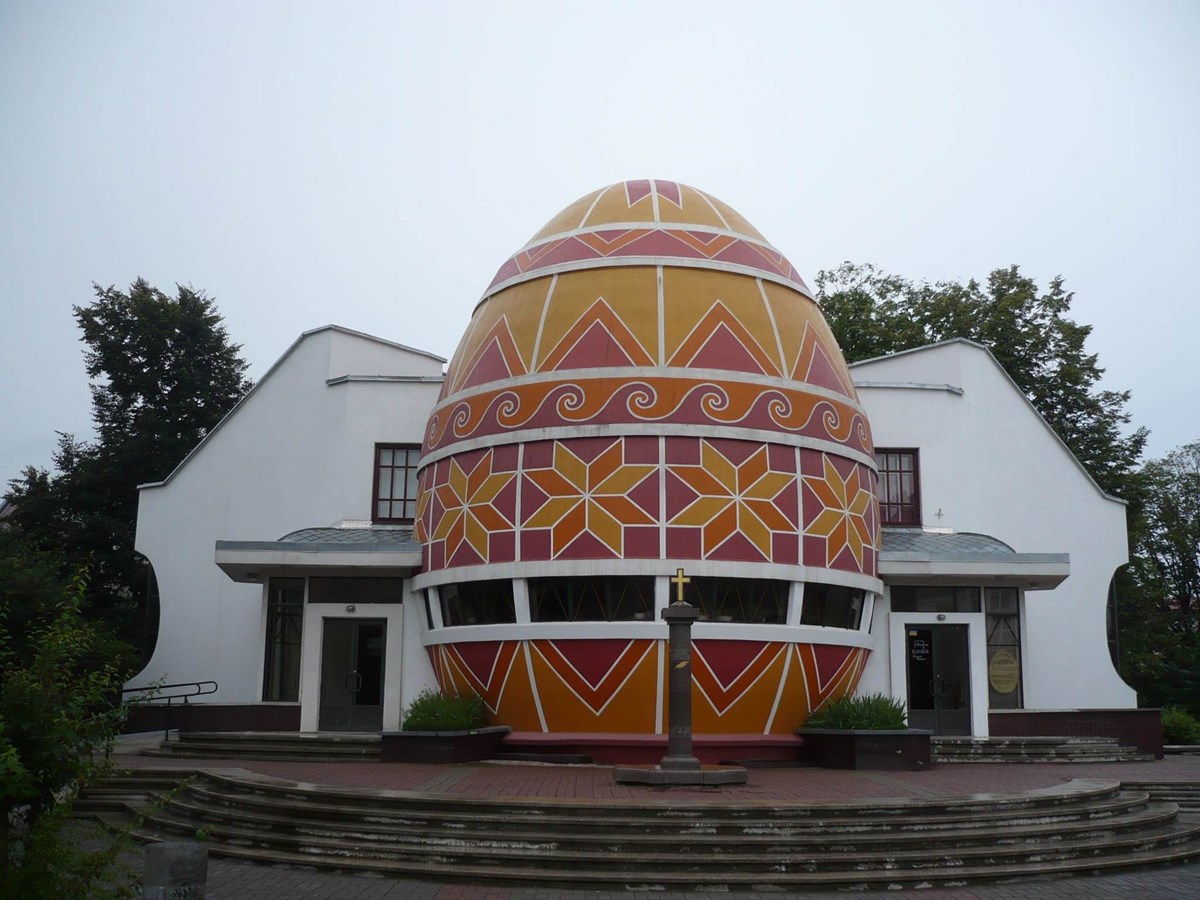 The Pysanky Museum in Kolomyia, Ukraine, has eggs from many regions.

The Bacsiks’ family roots are in the Carpathian Mountains on the Polish side, but after World War II some of their family were forcibly resettled in Ukraine.

Now they also have family living and fighting for Ukraine. A Bacsik cousin was one of the founders of the Pysanky Museum in Kolomyia, Ukraine, close to the Romanian border, that Maryann has visited.

It’s a two-story structure in the shape of a giant pysanka egg. The museum is full of eggs in various pysanky styles from all different regions. The Bacsiks’ relatives have reported that the airstrip there has been bombed, but the museum so far has remained unharmed.

“My cousins have been telling me to remain calm,” said Tamara.

Instead of worrying, the Bacsiks are doing egg decorating and raising money for Ukrainian refugees. Tamara points out that the eggs are a form of self-expression, so people can do religious or political symbolism if they want. Maryann guesses there will be “a lot of aqua and yellow eggs this year.”

Tamara’s usual dozen pysanka eggs for Easter represent a lot of time. The Bacsiks find that crafting an egg takes four to five hours, but the time depends on how intricate the design is.

They haven’t started any eggs yet, but still have some time to finish: Holy Week for Eastern Orthodox traditions is one week later than for Protestants.

To make a pysanka egg, you pick a good raw egg that is smooth and doesn’t have weak spots and then prepare it with a vinegar solution. You hold the egg with a tissue to keep oily fingerprints off it.

To make the designs, you use a writing tool called a kistka which draws hot beeswax onto the egg (pysanka comes from a Ukrainian word meaning “to write”). You start with inscribing the beeswax lines that will preserve the white egg color, and then dip the egg in progressively darker shades of dye, layer after layer.

The beeswax inscriptions seal in whichever color of dye is on the egg—any stray drop of wax will seal in that spot forever. When all the layers of wax and dyeing are done, you melt the wax off with a candle to reveal the colorful design underneath.

“If you hold it too close to the candle, you’ll get a black streak and there goes your beautiful design,” said Tamara.

“It takes a lot of patience,” said Maryann. “It’s easy to drop … a very delicate medium to work with.”

“In addition to the symbolism that you put on the egg,” Tamara added, “I think there’s a lot of symbolism in the process as well.”

At the end when you remove the wax, you drill a hole to flush out the egg—the most “dangerous” part of the process, according to the Bacsiks. Some people leave the egg full, but Maryann noted that those can result in a smelly disintegration in a china cabinet years later.

Despite their fragility, the eggs can last decades. The Bacsiks have pysanky eggs that are 50 years old—ones that Maryann made as a teenager.

“It is pretty intimidating when you first look at it,” said Tamara. “At least one out of five break.

“Some people might not pick up a paintbrush and go paint a painting,” she said. “But if you put an egg in front of them and say, ‘Come to this workshop,’ maybe it’s something that they’ll try.”

Pysanky and Prayer: US Churches Use Ukrainian Easter Eggs for Solidarity

The Pysanky Museum in Kolomyia, Ukraine, has eggs from many regions.
expand

Pysanky and Prayer: US Churches Use Ukrainian ...