Reforms have legalized 2,400 Christian structures, yet Abu Seifein represents problems from when construction and repair permits were impossible to obtain.
Jayson Casper|August 18, 2022 09:00 AM 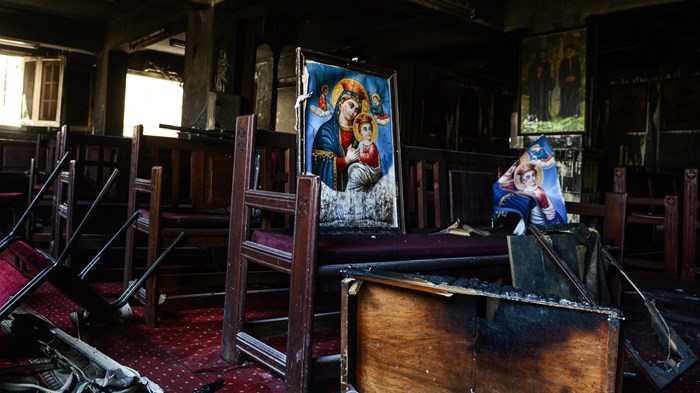 As Egypt reels from the tragic church fire that killed 41 worshipers on Sunday, many search for where to put the blame.

“God forgive the fire department,” said Ishak Henin, a deacon at Abu Seifein Coptic Orthodox Church in Imbaba, a dense urban neighborhood of Cairo. “If they had come earlier, they could have saved more people.”

Abu Seifein means “the father of two swords” and is the Arabic moniker for second-century martyr Saint Mercurius, whose icon reflects his military origins.

But the word church may give the wrong impression to overseas audiences, as the sanctuary was located between ground floor shops and towering residences. Illegally repurposed in 2007 from one of many tightly packed apartment complexes, the now-charred chapel traced back to an era when Egyptian Christians were unable to obtain permits to build new houses of worship.

The law was changed in 2016, and a Coptic legal expert stated Abu Seifein was officially licensed in 2019. Since the latest batch in April, the slow-moving process has now legalized 2,401 churches and affiliated service centers.

Yet many remain in their original condition, below safety codes, and according to the law full legality can only come once all regulations are satisfied.

Abu Seifein's four-story building housed two daycare facilities, and 18 children died in the blaze. Around 100 people were present at worship that morning; authorities stated most deaths—which included the local priest—were caused by smoke inhalation and the resulting stampede.

One family lost a set of five-year-old triplets, their mother, and grandmother.

The head of Egypt’s evangelical community was “deeply pained,” and offered condolences to Pope Tawadros, patriarch of the Coptic Orthodox Church.

“We pray that God will give comfort and patience to the people,” stated Andrea Zaki, “and bless the injured with speedy recovery.”

The fire was caused by a short circuit to the air conditioning unit, sparked by an overload when the private generator did not shut off upon the return of government electricity. The death toll could have been worse, as most Egyptian Christians worship on Friday—the Muslim day of communal prayer and the start of the official weekend.

Or it could have been less. On Monday and Tuesday, two other churches—one in Cairo, one in the Upper Egyptian region of Minya—suffered similar electrical damage, with no casualties. Officials then pledged to review safety precautions in every church in Egypt.

In May 2011, the nearby Virgin Mary Church was burned by extremist Muslims in the first sectarian attack on a church following the outbreak of Egypt’s Arab Spring that January.

This past weekend’s fire, though accidental, fell on the ninth anniversary of the 2013 dispersal of crowds protesting the deposing of then-president Mohamed Morsi, elected as the candidate of the Muslim Brotherhood. Around 1,000 people died in the security operation, and that same day churches were attacked across the country in response.

Once sabotage was ruled out at Abu Seifein, others blamed shoddy urban construction.

“It is not [only] terrorism that kills in Egypt,” wrote Zeinobia, a popular Egyptian blogger. “Negligence kills more, and on a daily basis with no discrimination whatsoever.”

Egyptian authorities were quick in response. President Abdel Fattah al-Sisi ordered the church repaired, and by Monday evening the building façade already appeared newly built. The government announced that families of the deceased were to be given about $5,200 each, with up to $1,000 for the injured.

Al-Azhar, Egypt’s top Islamic institution, pledged an additional $2,600, and the Red Crescent sent specialized teams for psychological support. Back in April, the grand imam had restated the right to build churches, emphasizing he would defend any that were attacked.

But violence sometimes continues, often connected to church building issues. In June, Christian properties in a village near Luxor were attacked following the licensing of its church under the 2016 law.

Church leaders linked the fire to the old conditions.

“At best, today’s tragic #EgyptChurchFire is a direct result of a painful time when Christian communities could not build purpose-designed churches,” tweeted Archbishop Angaelos of London, England, “and would have to covertly use other buildings, not fit for purpose and lacking the necessary health and safety features and escapes.”

Pope Tawadros praised the response of Sisi, noting that restrictions reflected the policy of previous governments. But his implicit criticism of the status quo included a call for authorities to move Abu Seifein to a larger space or to facilitate its expansion to accommodate the large number of area Christians.

But as laborers worked throughout the night under the watch of soldiers, Christians buried their dead and tried to take stock of their ruined facility. Wooden pews were stacked on the street, upon which sat religious icons covered in soot.

“We don’t have a lot of places to build as churches,” said Henin, the church deacon. “If we don’t learn from this experience, it could happen again.”