As society doubles down on online sports gambling, older activists see a chance to renew the Christian conscience around the practice.
Emily Belz|February 11, 2022 06:00 AM 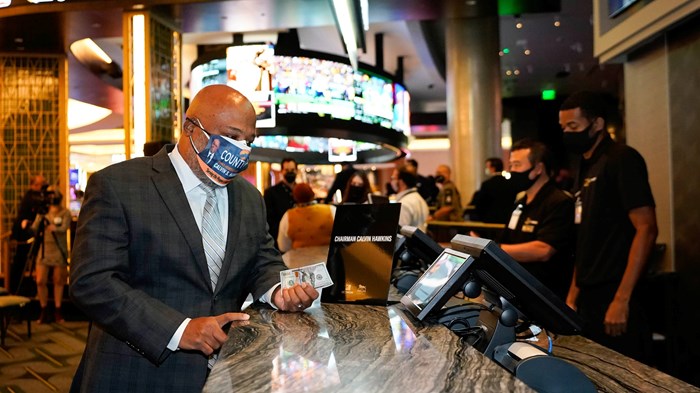 The 1990s were a busy time for Christians combatting gambling at local levels: fighting a casino here or lottery expansions there.

Tom Grey, a Methodist minister, traveled 250 days a year with the National Coalition Against Legalized Gambling, which now goes by the name Stop Predatory Gambling. He can remember major wins, like keeping a casino out of Gettysburg, Pennsylvania, with the help of filmmaker Ken Burns.

“The problem is [gambling companies] just have to win once, and they’ve got it,” Grey said. “Mayors and other people would stand up and say, ‘We don’t want your casino.’ Now there aren’t choices any longer. Churches feel it’s over.”

Grey, 81, is retired, but now he is watching the latest iteration of the industry take off: sports betting.

The Super Bowl on Sunday will be the first big windfall in many states for online sports betting. Companies like Draft Kings and FanDuel have been running ads throughout game broadcasts and all over sports news sites, urging fans to put money on their favorite teams or fantasy leagues.

The American Gambling Association has projected a record 31.4 million Americans will put down $7.6 billion on this year’s LA Rams–Cincinnati Bengals matchup. That’s up more than one-third from last Super Bowl, as more states have legalized online betting. Sports betting is now legal in 30 states and Washington, DC. In some states, such betting happens at a physical venue, while others have begun allowing it online.

After the US Supreme Court ruled in favor of the practice in 2018, states lined up to legalize sports betting to get a slice of the tax revenue from the multibillon-dollar industry. State-level Christian organizations that tried to fight off the recent legalization of sports betting or put guardrails around it found that there was too much money on the other side of the issue and not much appetite for fighting in the pews.

Few Christians see sports gambling as a problem. A 2016 survey from Lifeway Research found that only 36 percent of Christians thought sports betting was morally wrong. Pastors carry more reservations, with a majority telling Lifeway in 2019 that betting on sports is morally wrong and three-quarters believing it should not be legal.

People responding on social media to critiques of gambling on Desiring God or The Gospel Coalition argued that the authors were being “legalistic” and that betting was no different than investing in the stock market or a 401(k).

Putting bucks on the big game through a few clicks on an app or sports site doesn’t have the social stigma that casino gambling used to carry. The 2020 Gallup figures on the issue showed that 71 percent of Americans said gambling was morally acceptable, the highest level in the 18 years it had done the survey.

But those who continue to be involved in antigambling activism say it’s still harmful.

“I think there’s going to be a lot of devastation to individuals and families the following weeks,” after the Super Bowl, said Anita Bedell, who worked to fight gambling in Illinois for decades as the head of Illinois Church Action on Alcohol and Addiction Problems. “What do you do when you’ve lost all that money? Paying it back, that could take a lifetime.”

After working on the issue since 1990, Bedell—known in the statehouse as the “Church Lady”—retired last week. She said it was “disheartening” how quickly sports betting has swept the state and the nation.

“They disregard the problems that could happen,” Bedell said. “Churches are going to see all the harm and there will be an outcry … it’s too accessible, there’s no safeguards for young people, or to prevent people from losing everything.”

For now, churches aren’t very interested in the issue. Grey says churches are “worn out” and have to “pick their issues to fight.” He said the Methodists and Baptists were the firewalls against gambling in recent decades, and “the Baptists still hold Alabama,” which largely bans any form of gambling.

The Southern Baptist Convention’s Ethics and Religious Liberty Commission (ERLC) puts out every year an antigambling church bulletin insert, which lays out in bullet points why gambling is a “sin against God.” The Assemblies of God adopted a position paper in 2015 calling gambling “unwise” and “a compromise of Christian ethics and witness.”

These leaders and denominations point not only to the biblical wisdom on the nature of work, stewardship, and avoiding greed, but also to the idea that the few who gain from it are doing so at the expense of the many–including the poor. The ERLC bulletin insert emphasizes that opposition to gambling is based on love for neighbor.

Jason McGuire, who heads up the evangelical organization New Yorkers for Constitutional Freedoms, fought the legalization of online betting in the state last year. His organization opposes online betting for similar reasons that the more liberal New York Daily News editorial board has consistently opposed it: They both see it as a tax on the poor. He also adds that the Bible prohibits making money from “ill-gotten gain” and that people underestimate the addictive side of gambling.

“The Christian community needs to understand, this is devastating to families that are impacted if people get caught up in this,” he said. “On the anonymity of their cellphone in the living room, they’re gambling away their mortgage money. The whole world is setting people up for failure.”

The New York Council on Problem Gambling, a state-funded group, estimates that two million Americans “meet the diagnostic criteria for disordered gambling.” (Gambling interests point out that is a tiny percentage of gamblers.) Grey said that the creation of state-funded groups for responsible gambling allowed politicians to feel at ease with the addictive side of betting—that they were using some of the revenue for treatment.

A study in Spain showed a significant increase in “young pathological gamblers” after the country legalized online gambling, adding that the immediacy and accessibility of online gambling made it “more addictive than any other type of game.”

Despite their gloom about the immediate impact, the Christians who worked on the issue for decades are a bit more optimistic about the future. “This is the third historical wave of gambling in America,” said Grey. “It has a boom-bust cycle to it. Why? Because it doesn’t work.”

Sports betting has surged recently without any curbs. That makes the problems with gambling more visible to Americans, he thinks, and will spur bipartisan interest in regulating the industry.

He remembered in 1999 arranging a meeting between Green Party presidential candidate Ralph Nader and Focus on the Family president James Dobson to discuss gambling, and the two wrote a joint letter calling gambling “the bane of millions of Americans.” Nader targeted Republicans who supported casino interests, and Dobson targeted Democrats.

“It’s that’s kind of movement that’s needed today … the same right-left combination, this is something we agree on,” said Grey. “Let’s call for more regulation and get advertising under control. Those are doable things.”