Tongan Christians Felt the Force of the Volcano. And the World’s Prayers.

The kingdom and its diaspora credit their Christian faith for the low number of casualties.
Morgan Lee|February 7, 2022 11:58 AM
español 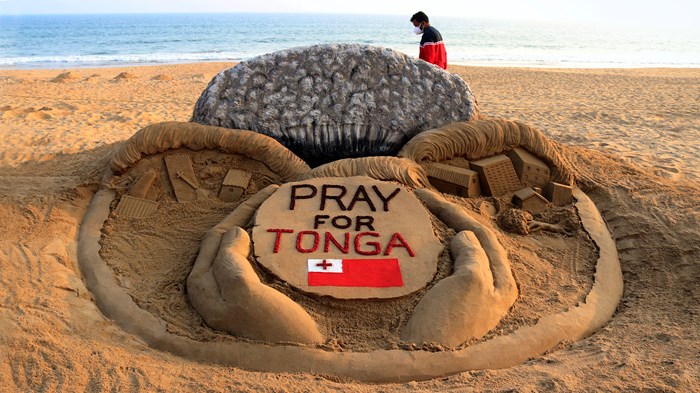 When he heard the first boom, Feʻilaokitau Kaho Tevi was in line to get his car washed in Tonga’s capital city of Nukuʻalofa. He returned home quickly. Others sat in traffic as over the course of January 15 a volcano erupted in the island kingdom—one that NASA scientists later claimed was hundreds of times more powerful than the Hiroshima atomic bomb.

The blast dumped a layer of ash several inches thick onto buildings, cars, plants, and trees and generated waves that reached estimated heights of 50 feet, sweeping away coastline villages and resorts. Rushing water pushed boulders and debris onto roads. The undersea telecommunications cable connecting the South Pacific nation of 105,000 residents with the rest of the world snapped.

And yet, “We feel that we have been the subject of the prayers of the worldwide Christian community,” said Tevi, the former general secretary of the Pacific Conference of Churches who has previously helped lead Tearfund natural disaster relief efforts in the region.

Anxious about the fate of their loved ones, many in Tonga’s 150,000-person diaspora have held all-night prayer marathons, organized vigils, and used social media to implore fellow believers to plead to God for the safety and protection of their loved ones.

“These were sleepless nights for me and many Tongans around the globe,” said Sela Finau, pastor of First United Methodist Church of Taylor, near Austin, Texas. “We were desperately waiting to hear any word of life from the kingdom. While our communication line was down with family and the people of Tonga, we leaned onto our faith. We knew that our communication line with God was always open and that we could petition for God’s mercy and protection.”

Many Tongans who have left the islands now live in Australia, New Zealand, or the United States, locations which gave them an opportunity to put the tiny community’s plight on the world’s radar.

Many see the hand of God looking out for the kingdom of some 170 islands, given the disparity between the intensity of the disaster and the low number of casualties (three).

“For the last two weeks, I have been in prayer day and night, thanking God that he spared Tonga,” said Siesia “Sia” Puloka, pastor of Seaview United Methodist Church in Seattle. “When you try to see Tonga, you almost have to kiss the map; it’s just a little dot. The tsunami and the eruption could have wiped Tonga out in a second. It’s flat like a pancake.”

Tongan Christians aren’t just crediting the prayers that began after the volcano went off. They point to King Tupou, who dedicated the islands to God and in 1839 adopted a new motto for his kingdom: Ko e ʻOtua mo Tonga Ko Hoku Tofiʻa (“God and Tonga are my inheritance”). Tupou was among the first generation of Tongans to become Christians after Western missionaries arrived at the end of the 1700s.

Today, the only remaining monarchy in the Pacific is overwhelmingly Christian. Protestants make up nearly two-thirds of the population (64.9%), with the majority—including the royal family—belonging to the Free Wesleyan Church. Mormonism arrived in the 1890s, and today 16.8 percent of the population belongs to The Church of Jesus Christ of Latter-day Saints, making Tonga the most Mormon nation on earth. About an equal share of Tongans are Roman Catholic.

As thousands of Tongans have emigrated, churches in their new locations have served as centers of cultural connection. Leading one of two Tongan congregations in Seattle, Puloka preaches in both Tongan and English in her services as part of an effort to keep the younger generation engaged.

“When there are holidays, we celebrate in the church and in the community. We do our island dances, we sing the songs from home,” said Puloka. “We wear our Tongan attire to church. I tell our young people they are beautiful, loved, and adored. Especially for kids that were born here, they wanted to be in the group, they want to belong. I also want them know that they are Tongan because their parents and grandparents are Tongan.”

This close sense of camaraderie is even reflected linguistically—the Tongan language has no word for cousin and so first and second cousins are considered as siblings, explained Finau.

“The nuclear family in the context of the West does not define nor exist in the Pasifika Island family structure,” she said. “Similarly, Jesus viewed others as his brothers and sisters, particularly those who followed God’s way, as told in Matthew 12. We all belong to God’s family. We all belong to the body, as the apostle Paul would describe in 1 Corinthians 12.

“Tongans, like all Pasifika people, see themselves connected and are a part of the moana (ocean). For this reason, when Tongans are in diaspora all over the globe, we still feel connected through the moana. After all, there is only one moana,” said the Texas pastor.

“A hymn, called ʻEiki Ko e ʻOfa ʻA ʻAu (‘Lord, How Great Is Your Love’), all Tongans learn growing up. The hymn is immensely heartfelt and meaningful for Tongans; many know it from memory,” she said. “I shared this song on my social media page a few times soon after the volcano and tsunami. The lyrics bring a sense of peace and remind us to lean and trust in God alone. The song uses the ocean as a metaphor, and it is an accurate account of Tongans expressing their love for God and vice versa. For Tongans, the ocean is not only a symbol of life; it is their lifeline, a way of life, an eternal inspiration.”

In recent days, relief has been traveling across the ocean, with New Zealand, Australia, the US, and the UK sending ships. Tonga is a COVID-free country, so the challenge now is ensuring that the virus doesn’t tag along with the supplies. With over 70 percent of the country having received at least one dose of the vaccine, Tonga was close to reopening its borders after nearly two years. It’s unclear how much longer those desperate to see their loved ones or to return will have to wait.

Despite the destruction, life has been returning to normal (at least for the pandemic). Last week, children returned to school and churches opened their doors. Even as ash still covers large parts of the islands, some entrepreneurially minded citizens have begun selling bags of it to reuse as plastering material.

“Tonga was to a large extent saved by forces that are beyond us. It was almost like a miracle,” said Tevi. “If we’re estimating the explosion to have been [many] times the explosion in Hiroshima, it’s just a surprise and wonder that we’re still here. We are in God’s hands. He has brought us through a number of disasters and we’ve come out safe and sound.”

Tongan Christians Felt the Force of the Volcano. And the World’s Prayers.

Tongan Christians Felt the Force of the Volcano. ...