Online myths and misinformation are becoming more of a distraction from their work.
Megan Fowler|January 27, 2022 06:00 AM 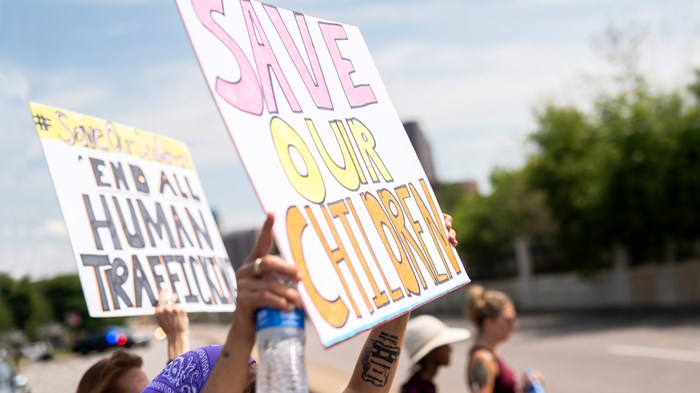 When Alia Dewees conducts seminars about the scourge of sex trafficking and its prevention, there’s one group of people more likely than others to quiz her about the furniture and décor company Wayfair selling missing children or kids being smuggled through tunnels under New York City: Christians.

These stories are among the conspiracies that were popularized by the QAnon movement and have captured the imaginations of countless Americans and more than a quarter of Christians.

What myth-believing Christians don’t want to hear is Dewees’s experience as a trafficking survivor. When her experiences don’t match what they’ve read on the internet, some trust the internet rather than the survivor in front of them.

“My voice is invalidated; my experience is invalidated,” said Dewees, who now works as the after care development director for Safe House Project, an anti-trafficking organization based in Alexandria, Virginia. “That was so true for me in my trafficking experience for so many years that it’s a triggering experience. It triggers a trauma response of feeling like I want to shut down.”

January is National Slavery and Human Trafficking Prevention Month, and anti-trafficking groups are struggling to combat not just an international multibillion-dollar industry but also misinformation that distracts from real survivors.

Anti-trafficking advocates have always encountered misconceptions, often formed from media portrayals of trafficking like the film Taken. It’s common for people who know nothing about trafficking to assume traffickers work by kidnapping unsuspecting victims off the street. And Dewees said that most people will abandon their misconceptions when they learn the facts through education and training.

Those who believe conspiracies are different, though. Dewees says they are far less eager to abandon their misconceptions when they hear information from experts in the field.

Wells tells conspiracy enthusiasts that every day people call Safe House Project for help. “If we’re constantly focused on looking for conspiracy theories and survivors that we can’t impact, we’re ignoring the opportunities to identify and respond to the children in our communities that are being trafficked and are right under our nose,” she said.

Anti-trafficking advocates understand that those under the spell of conspiracy theories almost always have good intentions and want to help. Stephanie Simpson, communications and training manager for Restore NYC, said some of its most devoted supporters contacted her with questions about the Wayfair trafficking conspiracy. But they have believed a myth about trafficking that flattens complicated situations into good-guy/bad-guy scenarios.

“It’s human nature—we want so badly for there to be a bad guy,” Simpson said. But the truth is far more nuanced, and “nuance isn’t sexy.”

Rather than fighting bad people, Restore NYC focuses on bad systems that force labor- and sex-trafficking victims to feel as if they have no other options. Housing inequality, employment discrimination, racism—these systemic issues are harder to see and believe and even harder to dismantle.

And by focusing on the bad guy, not only do conspiracy believers not see the complex roots of trafficking, but they often miss the victims too.

Pat Bradley, founder of Crisis Aid, said trafficking myths get people interested in an exciting “rescue,” but not the long road of healing that survivors must walk. Crisis Aid has moved away from using eye-popping statistics about trafficking to keep the focus on survivors.

“Lots of people are interested in the rescue, but we are more focused on the victim and getting Christian, trauma-based care” to those leaving trafficking, he said. Crisis Aid provides wraparound support for survivors and their families and walks survivors through the healing process, even over the course of several years.

Polaris, the anti-trafficking agency that operates the US National Human Trafficking Hotline, saw its phone traffic dramatically increase in 2020.

“Today, we see a new urgency around awareness,” the organization said in a statement on its site. “It is more important than ever before to move past the myths, stereotypes, and unfounded fears that feed panics and conspiracy theories, which manifest in real harm to victims and survivors.”

Bradley said he commonly encounters people who wrongly believe their communities—no matter how small—are hubs for traffickers. This just isn’t true. He doesn’t believe in “awareness campaigns” anymore. “It goes in one ear and out the other.”

As an article in The Atlantic this month noted, the recent panic over sex trafficking has been perpetuated by social media.

“On Facebook and Instagram, friends and neighbors share unsettling statistics and dire images in formats designed for online communities that reward displays of concern,” the story read. “Because today’s messaging about child sex trafficking is so decentralized and fluid, it is impervious to gatekeepers who would knock down its most outlandish claims.”

Some anti-trafficking advocates don’t mind the counterfeit stories because they are a means of getting people to pay attention to the cause. Elizabeth Fisher Good, founder of The Foundation United, said if the rumors open more eyes to the issue of trafficking, that’s fine with her. Fisher Good said churches need to be better equipped to spot abuse in the church, since experiencing abuse makes people more vulnerable to being trafficked.

Sandra Morgan doesn’t even like the term conspiracy theories; it’s too politically charged. Instead the director of the Global Center for Women and Justice at Vanguard University talks about “counterfeit” stories.

As anti-trafficking advocates do the work of educating and advocacy while combating counterfeit narratives, Morgan likens them to the Israelites in the book of Nehemiah, building Jerusalem’s walls with their tools in one hand and swords in the other to fend off marauders.

“You could spend your whole time putting out fires, and that distracts from what we need to be doing every single day,” she said.

Even now Morgan, based in Orange County, California, is dealing with the Super Bowl myth, the misconception that the host city Los Angeles will see a dramatic increase in sex-trafficking business next month.

Instead of investing time debunking counterfeit narratives, she urges churches to spend time educating themselves with truth so they can easily spot counterfeits and identify real victims.

Restore NYC has added a module about counterfeit myths to its Trafficking 101 training since questions about conspiracies came up so often in these settings. And while Christians might not see the systemic issues that push the vulnerable toward trafficking, Simpson said believers do see people made in God’s image and are eager to help fellow image bearers in need, regardless of what brought about their difficult situations to begin with.

In the 2021 fiscal year, Restore NYC distributed $940,000 in emergency relief to trafficking survivors.

Dewees of Safe House Project noted that some of the most devoted, effective advocates she works with in the anti-trafficking field are Christians.

“Those really solid faith-based leaders in this field are the ones having the most incredible impact because they’re taking the Christlikeness that they have and extending it to the survivors they work with,” she said.

To see the truth of human trafficking, Wells says Christians need to abandon their “savior complex.”

“The idea that we see the most rampant in the church is if there’s a perfect victim, there’s a person we can go out and save, and we’re going to be the heroes of the story.”