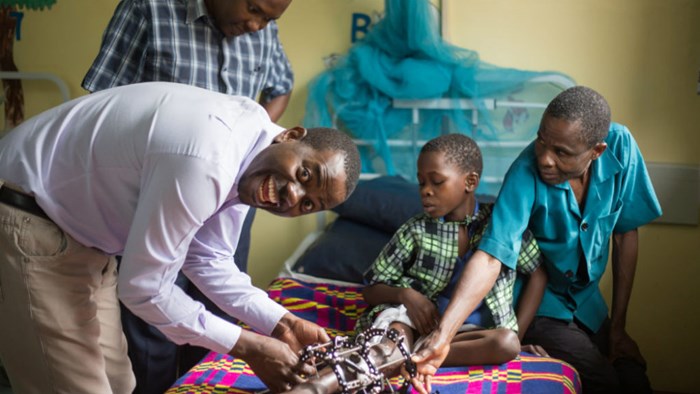 Tongai Chitsamatanga just finished treating an 8-year-old with dislocated hips, two children with bone infections, and another two with clubfoot.

It’s hard work, requiring great patience and greater skill. The 41-year-old doctor could be earning a lot more for his expertise at his old hospitals in Oxford and Derby, United Kingdom. But instead he is here, in Bulawayo, Zimbabwe, in a 13-bed children’s hospital that opened in April 2021.

He personally doesn’t think the decision is that hard to explain, though.

“To me that is practical Christianity,” Chitsamatanga told CT. “Rather than saying you’re Christian and having nothing to show for it.”

Chitsamatanga is one of just two pediatric orthopedic surgeons in a country of more than 15 million. The other, his colleague Rick Gardner, is an expatriate.

The two work at CURE Zimbabwe, the only place in the country offering care for children with complicated conditions such as clubfoot, knock knees, and bowed legs. The newly opened children’s hospital, which has three operating theaters and an outpatient clinic, is one of eight that the Christian nonprofit CURE International operates around the world.

Poor pay and working conditions have triggered an exodus of qualified health workers from Zimbabwe. More than 2,200, including doctors, nurses and pharmacists, left government service last year, according to the government's Health Services Board. The figure is more than double that of 2020, and nearly triple that of 2019.

Last July, the city of Harare announced that 240 nurses had left its service and in October local reports said nine clinics had closed due to staff shortages.

The situation is likely to worsen in the wake of the COVID-19 pandemic, medical professionals warn. Health care workers are also drawn to the better working conditions and superior pay in the developed world. Some industrialized countries such as the UK and Germany have eased immigration requirements for health workers in recent years to attract more trained medical staff to care for their aging populations.

“Brain drain” is a real challenge for Zimbabwe health care. But the country is also struggling with conflicts over the state-run system.

“Sometimes it’s not even brain drain, but skilled workers resigning from government service and going and sitting at home,” said Shingai Nyaguse-Chiurunge, president of the Zimbabwe Senior Hospital Doctors’ Association.

In late 2019 and early 2020, doctors at state hospitals went on strike for months over poor pay and working conditions, as well as lack of PPE to fight COVID-19. Junior doctors have been earning around $200 per month.

The government has proposed amendments to the Health Services Act that would prevent prolonged strike action and impose jail terms or fines on those who incite protests.

These conditions are hardly conducive to luring workers back home.

According to Chitsamatanga, returning to Zimbabwe is a real commitment.

“It has to be your calling,” he said. “People will say, ‘Come, come, come,’ but they might not be able to get the same kind of blessing as you.”

And even when you feel like it is your calling, it can take a long time. For Chitsamatanga, the journey began 15 years ago, when he was assigned to the Mutambara Mission Hospital, in the remote mountains of the Chimanimani district, near Zimbabwe’s eastern border with Mozambique.

He had studied for five years at the University of Zimbabwe’s medical school and then spent two interning at Harare’s main Parirenyatwa Hospital.

In 2006, when he got to the mission hospital run by the United Methodist Church, he saw dire need. The hospital hadn’t had a doctor in four years.

At the time, the late Robert Mugabe was in power, political tensions were high, and the economy was in freefall, worsened by foreign currency shortages and record-high inflation. Due to poverty, poor health care and high rates of HIV, the average Zimbabwean could not expect to reach their 40th birthday, according to the World Health Organization.

The hospital was one of just five in the country that could distribute antiretroviral drugs to prevent AIDS-related deaths, thanks to assistance from the Geneva-based Global Fund to Fight AIDS, Tuberculosis, and Malaria. But patients often couldn’t reach the hospital, and Chitsamatanga and his team would travel around Manicaland—the second most populous province in the country—to administer the lifesaving medication at small rural clinics.

Chitsmatanga will never forget one patient who was trying to reach a clinic in a wheelbarrow.

He and his team had been conducting an outreach clinic at Rusitu, a banana-, pineapple-, and avocado-growing district around an hour’s drive from the mission. As they drove home in the dark, their headlights caught a woman in her 40s being pushed in a wheelbarrow up the dirt road by a family member. They stopped the car. The HIV-positive patient wasn’t able to walk and hadn’t been able to make it to the clinic while they were there.

Chitsamatanga’s team did a clinical assessment right there on the road and started the woman on a course of antiretrovirals.

Chitsamatanga saw the woman again three months later, at another clinic. She was well enough to walk up to him and ask, “Doctor, do you remember me? I’m that lady who was in the wheelbarrow.”

“It was amazing,” he told CT. “Sometimes you never get such feedback. But to me that was a testimony, to say, ‘This is exactly what the Lord wants at this moment in time. This is why I’m here.”

His posting to the mission only happened, however, because the government reinstated a controversial rule that required newly trained doctors to do one year in a district hospital to receive certification.

Like many of his friends and colleagues, Chitsamatanga opposed the rule.

“We were young, we all wanted the streetlights of Harare,” he said. “At that time some of my colleagues left the country, but I decided to do the year, and the year turned into six years."

Mercy Gaza, the woman who was to become his wife, was also posted to the mission hospital. She too was a doctor, and after a year at the mission, they got married. Their first child was born three years later.

“That was an amazing time for us as a couple,” he said. “We had a very good time getting to know each other.”

Chitsamatanga had to return to Harare, though, to begin his specialization in orthopedics. He followed that up with a year spent training in general orthopedics at the College of Surgeons of East, Central, and Southern Africa, and fellowships at hospitals in the UK.

But then, when the choice came, he decided to return and work at the new hospital in Bulawayo, the second largest city in Zimbabwe.

CURE International, based in Grand Rapids, Michigan, worked with the government to launch the hospital and committed to treating children under the age of 18 for free.

“Our organization is here because of Jesus’ calling to ‘heal the sick and proclaim the kingdom of God,’” CURE Zimbabwe’s Executive Director Jonathan Simpson said. “Our hospital is a safe place for children, where we hope they will experience the love of Christ.”

Chitsamatanga knew the work would have its challenges. He would be treating children who should have been taken care of much earlier, in difficult medical conditions worsened by poverty. Economic struggles continue in Zimbabwe, and the ongoing conflict between the government and health care workers seems intractable. Financially, for a doctor who could work in the UK, maybe the decision didn’t make a lot of sense.

But Chitsamatanga is a man of faith. He calculates these decisions differently than other people.

“If I think or pray about something and realize this is the direction God wants me to take, then I just take it,” he told CT. “I need to go the way the Lord is pointing.”