Though two-thirds are OK with flying the flag year-round, pastors have become more divided over Independence Day celebrations since 2016.
Aaron Earls - Lifeway Research|July 1, 2022 06:00 AM 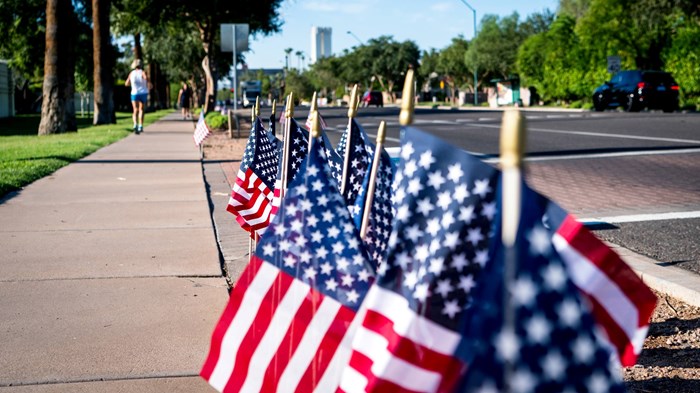 Protestant pastors say they will worship God and honor America at church services this weekend, and they’re not too worried churchgoers will confuse the two.

Most pastors (56%) say it’s important to incorporate patriotic elements into worship services the week of July 4th to celebrate America, including 27 percent who strongly agree, according to a Lifeway Research study of 1,000 US Protestant pastors.

These findings represent a small decrease from a 2016 Lifeway Research study, when 61 percent of pastors felt such worship service elements were important.

“While not a date on the Christian calendar, most Protestant churches adjust their worship services to acknowledge the birth of the United States each July,” said Scott McConnell, executive director of Lifeway Research. “For most churches, it isn’t just tradition. The majority of pastors agree it’s important to incorporate it into the worship experience.”

Pastors with no college degree (70%) or a bachelor’s degree (67%) are more likely to see elements celebrating America as important than those with a master’s (46%) or doctoral degree (50%).

Evangelical pastors (64%) are more likely than their mainline counterparts (48%) to value timely patriotic elements in the worship service.

Younger pastors, those 18 to 44, are the most likely to say the worship service doesn’t need patriotic additions (65%).

Regardless of their opinions on the importance of patriotic elements, few pastors have worship services as usual the week of Independence Day. For 15 percent of US Protestant pastors, services are no different than other weeks.

Most pastors say the Fourth of July changes involve honoring veterans and their families as well as patriotic music. A majority say they recognize those with family currently serving in the armed forces (59%), include special music honoring America (58%), recognize living veterans (56%), or recognize families who have lost loved ones in service to our country (54%).

Three in 10 pastors say they include other special ceremonies to honor America, and 14 percent make other changes to the service.

“Changes to July 4th church services today are similar to those described by pastors in 2016 with significant emphasis on people who have served in the military,” said McConnell. “The biggest change is fewer churches including special music related to America (58% compared to 66% in 2016).”

For each of the possible worship service changes, pastors 65 and older and those in the South are among the most likely to say their churches make that change.

Younger pastors, 18- to 44-year-olds, (23%) are among the most likely to say their worship services the week of July 4th are no different from other weeks. Additionally, Restorationist movement pastors (31%) are more likely to make no changes than Baptist (12%), Methodist (12%), Pentecostal (10%), and non-denominational pastors (8%).

Apart from any patriotic holidays, two-thirds of US Protestant pastors see nothing wrong with flying the US flag in their church all year long. Lifeway Research found 67 percent say it’s appropriate for a church to display the American flag in worship services throughout the year. Another 28 percent disagree, and 5 percent aren’t sure.

The share of those in favor of year-round flag flying in services is down slightly from the 74 percent who supported such displays in the 2016 Lifeway Research study.

“Some denominations offer specific guidance regarding displaying the American flag, but most congregations decide on their own whether it’s present,” McConnell said. “Because a national flag is a symbol, it often means many different things to different people. So, discussions around the reason for its presence in many churches can be just as diverse.”

Generational and educational divides are evident again, as pastors 65 and older (81%) and those with no college degree (79%) are among the most likely to see year-round American flag displays as acceptable.

Love of country or love of God?

While most churches are comfortable incorporating patriotic elements into their buildings and worship services, some US Protestant pastors worry their congregations may be taking things too far. Almost two in five (38%) say their congregation’s love for America sometimes seems greater than their love for God. Almost three in five (59%) disagree, and 3 percent aren’t sure.

That marks a significant decline from 2016 when most pastors (53%) expressed worry their congregation occasionally had more devotion toward their country than God.

“In the last six years, many pastors’ concerns about patriotic idolatry in their congregations have faded,” said McConnell. “Like any idol, the temptation to prioritize, worship or depend on our nation over God can resurface at any time.”

Younger pastors are more concerned than the oldest pastors. Those 18 to 44 (47%) and 45 to 54 (42%) are more likely than pastors 65 and older (29%) to say their congregation sometimes seems to love America more than God.

Pastors in the South (39%), who are among the most likely to incorporate patriotic elements in worship services, and those in the Midwest (42%) are more likely than pastors in the Northeast (29%) to worry about misplaced devotion.