Pew: Israelis and Palestinians Find Favor in the Eyes of Americans

Survey shows citizens remain much preferred over their governments, while US polarization continues as youth shift support from Israel to Palestine.
Jayson Casper|June 9, 2022 06:00 AM 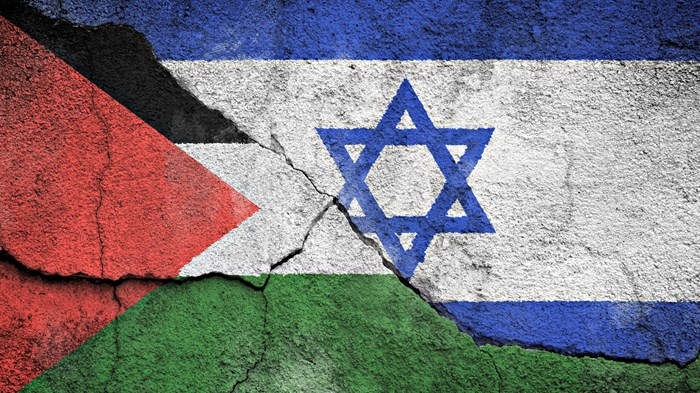 Image: Tuomas A. Lehtinen / Getty Images
Illustration of the flags of Palestine and Israel

Americans prefer a less polarized Holy Land. But they themselves are as polarized about it as ever.

A new survey by the Pew Research Center—three years removed from when Donald Trump and Benjamin Netanyahu led the political scene—reveals rising favorability ratings for Israel and Palestine, across nearly every segment of Americans.

Most, however, still prefer Israel.

Overall, 1 in 3 white evangelicals view both peoples favorably, but only 1 in 10 favor both governments.

These believers are out of step with the wider US, however.

“Americans naturally want to be favorable toward other peoples,” said Mark Tooley, president of the Institute on Religion and Democracy (IRD). “I’m surprised it is not higher.”

Theology may have something to do with the affinity.

In a new question, Pew asked Americans if God gave the land that is now Israel to the Jews. White evangelicals agreed at a rate of 70 percent, while 23 percent were unsure. Overall, 3 in 10 Americans agreed (similar to the response of American Jews in a separate 2020 survey). A significant 41 percent of Americans were unsure, while 17 percent replied they did not believe in God.

IRD aims to champion biblical Christianity in its support for Israel. But even if secular in orientation, Tooley said that many have inherited an unconscious connection with Israel from longstanding American culture. The higher white evangelical rates stem from increased polarization, tying support to their religious identity. 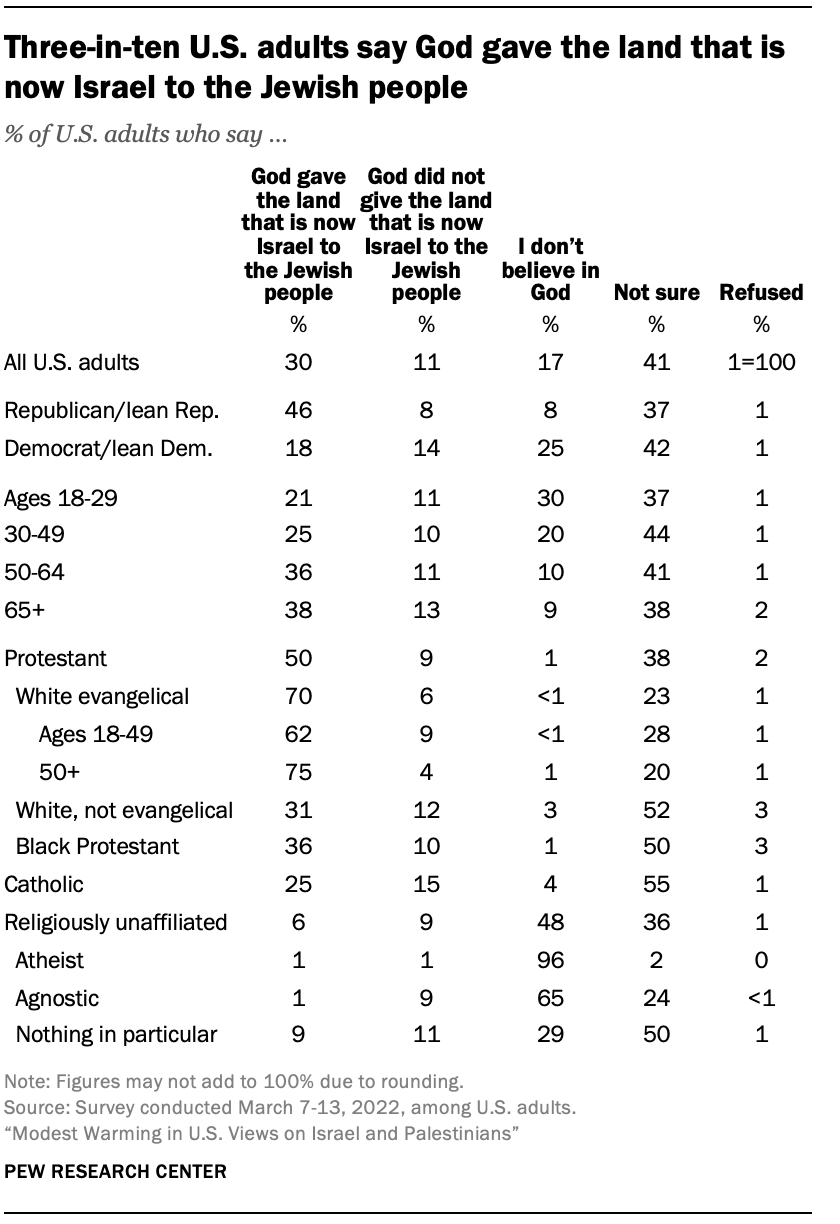 Gaps were significant in feelings toward Israel and Palestine as well.

Nearly 4 in 5 Republicans feel favorable toward the Israeli people (78%), compared to 3 in 5 Democrats (60%). Both numbers are slightly higher than in the last survey. And while 2 in 3 Republicans look favorably upon the Israeli government (66%), only 1 in 3 Democrats do similarly (34%), both representing an increase. 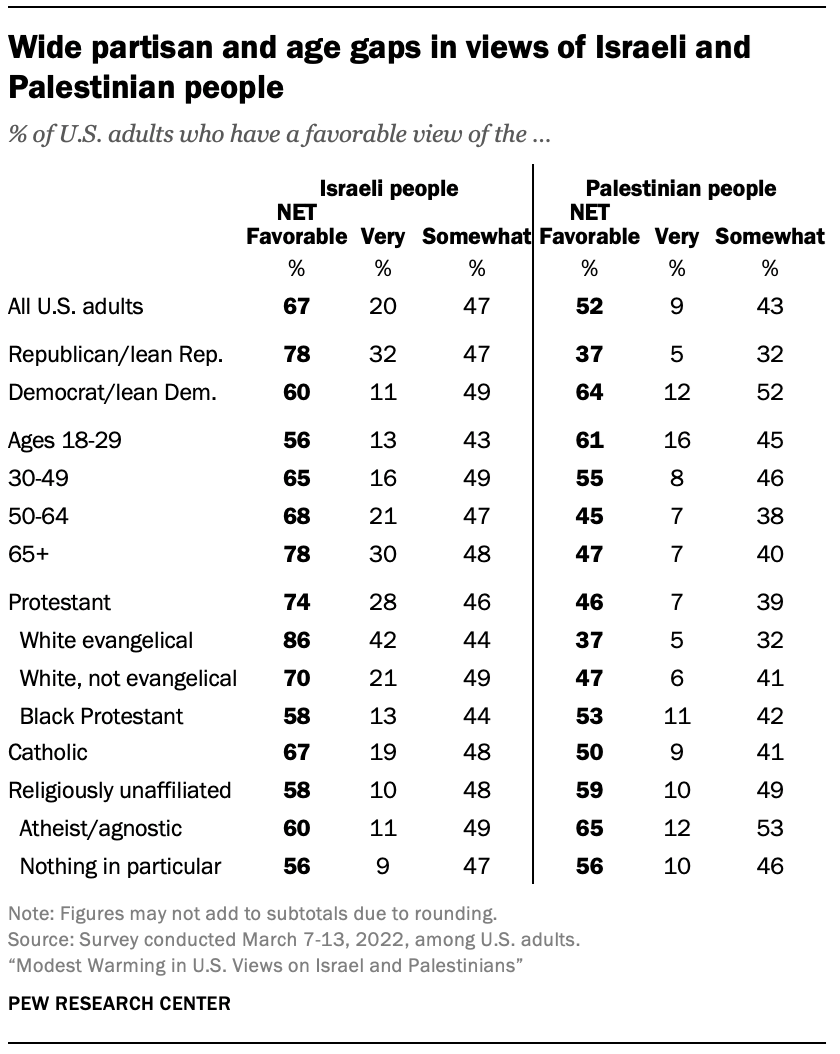 “Leaders in both countries specialized in the rhetoric of division,” said Todd Deatherage, executive director of Telos. “It has cemented a complex foreign policy challenge into a growing list of issues that polarize us on a partisan basis.”

Founder of an evangelical group dedicated to changing the narrative on Israel, he appreciates the rising number of Americans who wish to see both peoples flourishing.

But it is the young, he said, who “take seriously Jesus’ call to be peacemakers.”

Older Americans, however, resemble Republicans and white evangelicals concerning Israel, with 78 percent favoring the Jewish state. Only a single-point rise from the Trump-Netanyahu years, their opinion of Israel’s government increased from 57 to 64 percent. Toward the Palestinian people, their rating rose from 43 to 47 percent, while their view of the Palestinian government increased from 19 to 24 percent. 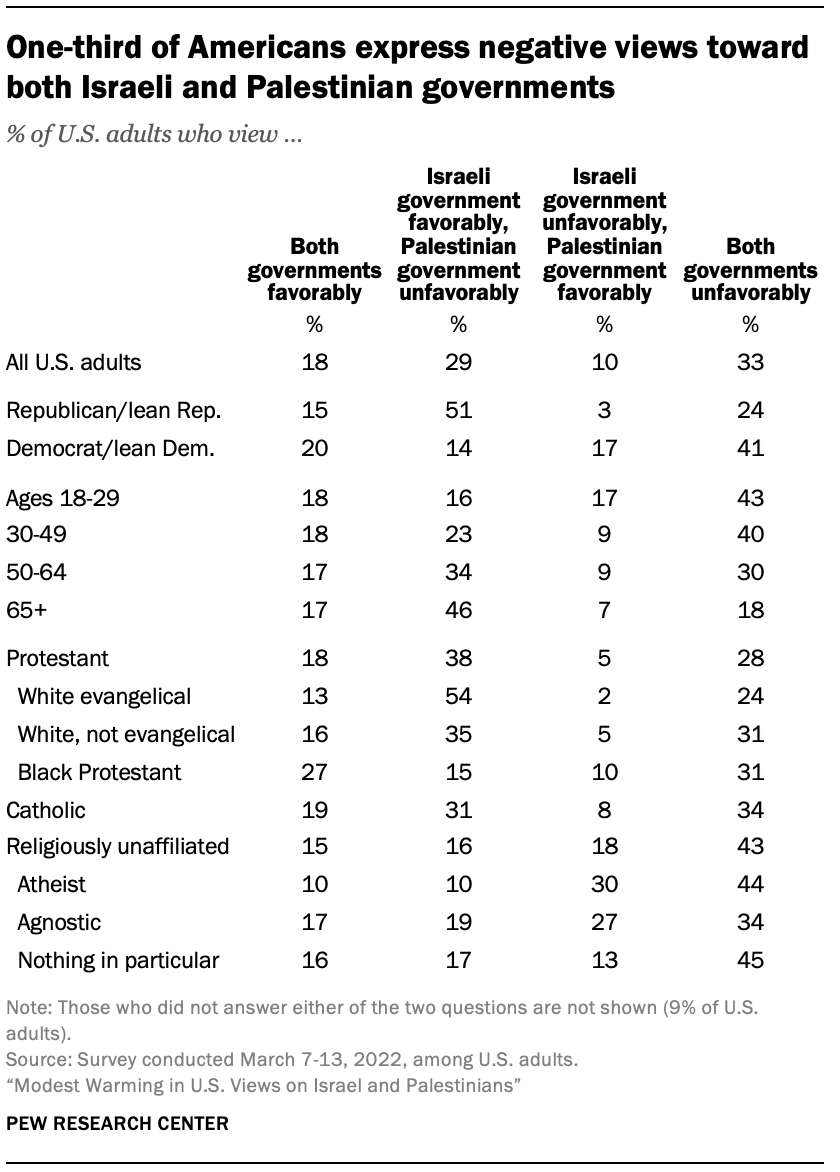 “Younger evangelicals see social and political justice as central to their faith,” said the author of Whose Land? Whose Promise? What Christians Are Not Being Told About Israel and the Palestinians. “Older evangelicals do not.”

Burge, like Deatherage, finds hope that this divide—mirrored also in US politics—is narrowing in the overall favor Americans show both peoples. Evidence can be found in the other denominations. 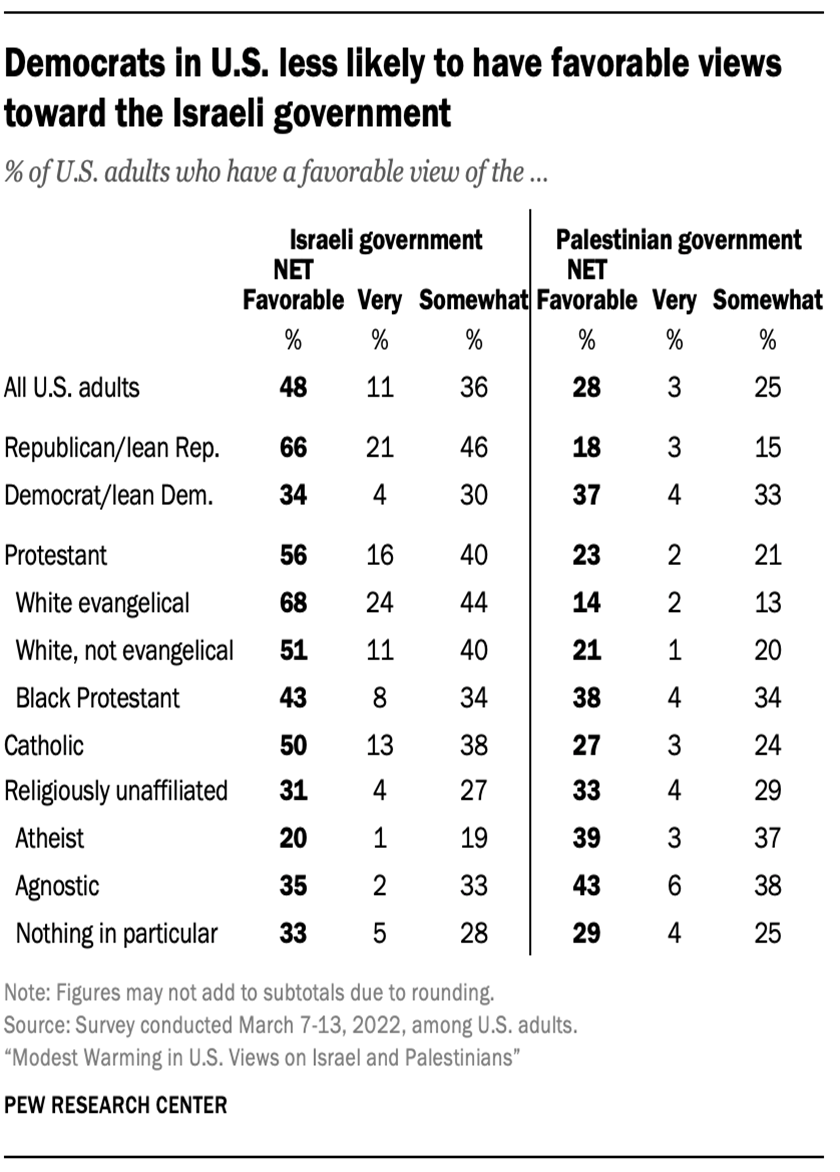 Tooley attributed the rise in Black support for Israel to the decline of their traditional church and the rise in Pentecostal and nondenominational faith. The latter tend slightly toward Zionism.

Affinity toward the Palestinians comes from two sources, said Mordecai Inbari, professor of philosophy and religion at UNC–Pembroke. The Black Lives Matter narrative is anti-Israeli, said the Jewish scholar. But geopolitics also matters.

“Warmer feelings toward Muslims correlate with sympathy toward Palestinians,” he said, having conducted extensive research on evangelicals and Christian Zionism. “With the end of the wars in the Middle East, these two are increasingly connected.”

Tooley also cited a changing regional dynamic. As Arab nations normalize with Israel, the Holy Land is overshadowed by other conflicts. Americans correspondingly give it less attention, and can warm toward both.

Gerald McDermott believes the warmth is not always justified.

“This can only be from inattention to hard news about the Palestinian governments,” said the author of Israel Matters and editor of The New Christian Zionism. “Hamas and the Palestinian Authority imprison citizens who dare to criticize them.”

McDermott also spoke of incitement against Israelis, and the diversion of funds away from local development in favor of rocket launchers. And his displeasure was particularly directed toward the “specious claims” of activists reflected in a new survey question about the boycott, divestment, and sanctions (BDS) movement.

Launched in 2005, its supporters allege mistreatment of Palestinians in a system of apartheid, and call for an international pressure campaign against the Israeli government. Some of its critics call BDS antisemitic, for denying legitimacy to a Jewish state.

“Muslims have many nations in the Middle East and elsewhere,” said McDermott. “Why are Jews not permitted to have one?”

Overall, few Americans have heard about the BDS movement (no more than 1 in 5 across demographic groups). But atheists are twice as likely to support it (13% vs. 5%), while evangelicals and Republicans are twice as likely to oppose it (11% and 12%, respectively, vs. 6%). While BDS is best known for activity on college campuses, only 17 percent of those under the age of 30 have heard about it; 8 percent support, while 4 percent oppose.

Tooley said BDS has “largely failed.” Ignorance of it, said Inbari, is for the best. 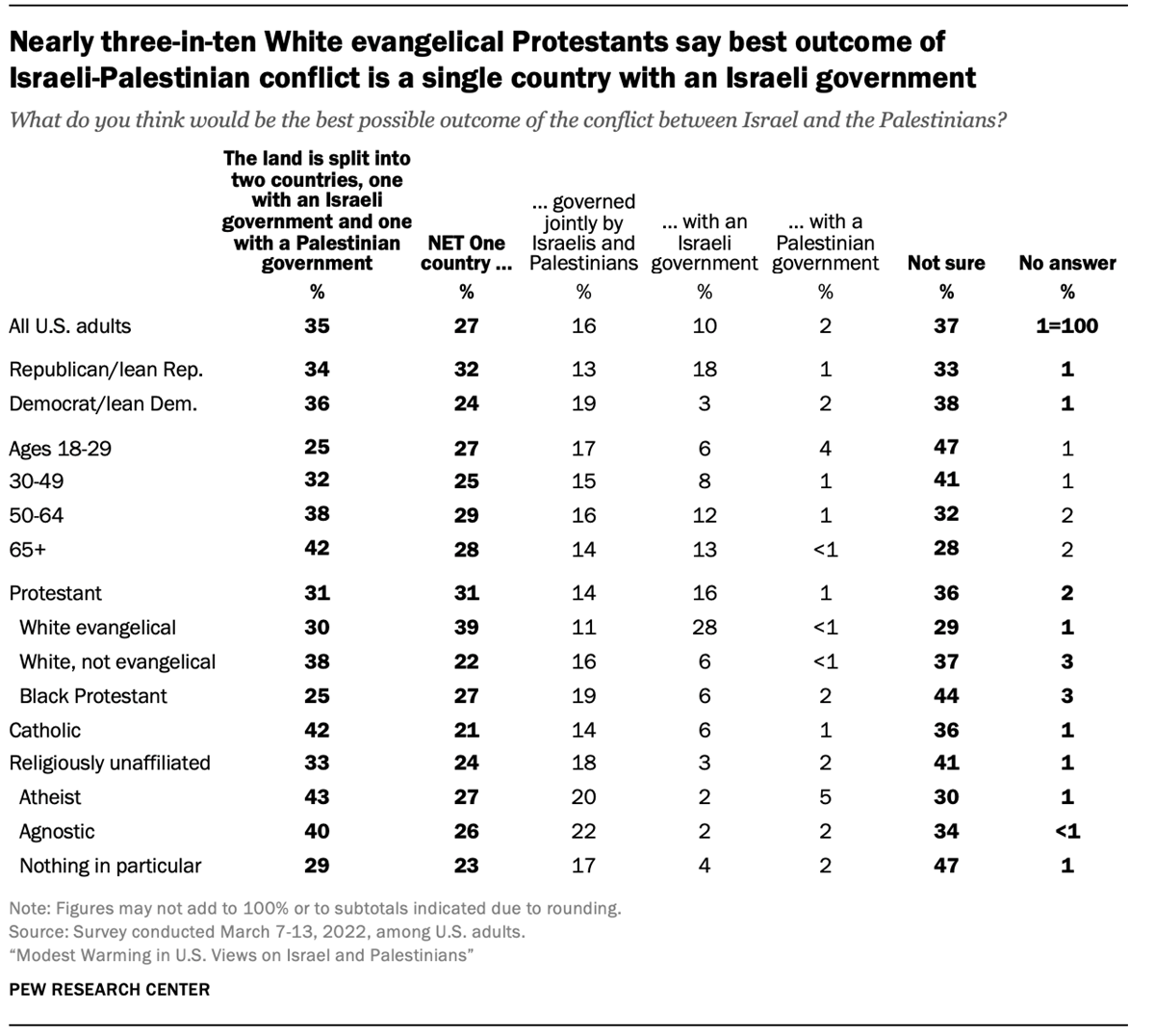 There are clearer opinions about the best possible outcome for the conflict between Israel and Palestine—but also significant uncertainty. Between a quarter (ages 65 and above, 28%) and a half (ages 30 and under, 47%) of Americans are “not sure” if a one-state or two-state solution would be better.

“Who can blame them?” said Tooley. “It’s very complex.” Inbari thinks most people do not bother to study the issues, as the policy issues are not tied to their religious identity.

If so, this is least true of white evangelicals. This group of respondents was among the most sure, with 4 in 10 favoring a one-state solution (39%), and 3 in 10 believing it should have an Israeli government (28%). While few Americans believe that the one-state should be governed by Palestinians, 2 out of 10 Democrats (19%), Black Protestants (19%), and the unaffiliated (18%) believe it should be governed jointly.

Apart from white evangelicals, Black Protestants, and those under 30, all other segments preferred the traditional US policy of support for a two-state solution. Highest were the 4 in 10 atheists (43%), Catholics (42%), ages 65 and older (42%), agnostics (40%), and white Protestants (38%) who believe each people should govern themselves.

Pew surveyed 10,144 Americans in March. It characterized the findings as a “modest warming” toward both Israel and Palestine.

Deatherage called it a rejection of zero-sum activism. And Inbari, the Tar Heel professor, appreciated that Pew did not make respondents pick between them.

“People can like both sides,” he said. “It is possible to support both UNC and Duke.”

Tags:
None
Posted by:
Jayson Casper

Pew: Israelis and Palestinians Find Favor in the Eyes of Americans

Pew: Israelis and Palestinians Find Favor in the ...