How a congregation in Baltimore started caring for an urban forest while another in Grand Rapids started counting dragonflies, damselflies, and white heelsplitter mussels.
Bekah McNeel|June 15, 2022 06:00 AM 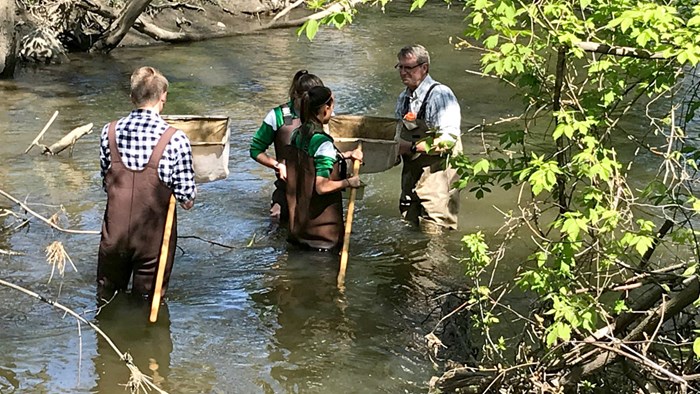 Image: Courtesy of The Refuge

Calling is a funny thing.

He didn’t plan on becoming an urban forest keeper.

“It took a minute,” he said, laughing at the evolution of his ministry.

Gary Koning knows how that goes. What started as a pretty typical stream clean-up effort has completely altered his congregation at Trinity Christian Reformed Church in Grand Rapids, Michigan.

“From one thing it has grown to another and another,” said Koning, now an expert on watershed macroinvertebrates.

The two men don’t know each other and don’t have any common connections. But in their separate churches, and their separate callings, they both found that being faithful in ministry meant taking care of nature. Christ’s call to “feed my sheep” required tending the patch of earth where their churches were standing. While not every congregation, or every Christian, has a literal garden to tend, Martin and Koning’s ministries offer examples of what the sometimes-abstract concept of “creation care” can look like taken seriously.

Amid the pandemic, social upheaval, and generational shifts in church membership, both pastors have seen how the special relationship between God and nature, a communion reflected throughout Scripture, has given new life to their congregations.

Martin couldn’t even see the 10 acres of woods next to the Evangelical Free Church when he came to Baltimore. Well, he could see them. But in a more important way, he couldn’t.

Once, he walked to the edge and looked in, but it was dark and foreboding and he didn’t cross that line. Besides, he had other issues.

Decades of white flight and a split over where the church should be located had left the Stillmeadow congregation with deep wounds.

“Their relationships with one another were fractured,” he said. “There was a lack of healing.”

The unhealed wounds he said, led to a “stewardship issue.” When Martin arrived in 2017, he said, no one had energy to think beyond the daily tasks inside the building. Those 10 acres were invisible to them.

The church also wanted to connect to the neighborhood. When Martin started to try to learn about the community around the church, though, a neighbor led him right back to the impenetrable edge of the woods.

“I showed up and he had a machete,” Martin recalled.

Following someone who knew the place this time, he went inside. The serenity moved him. It was quiet, laced with deer paths, water paths, and even paths where local kids tromped through. Urban planners have a name for the lines left by repeated off-road foot traffic: desire paths. They show where the landscaping design doesn’t meet people’s actual needs—which Martin hoped the church would be able to do.

He looked around the woods and saw an answer to prayer. The neighborhood needed green space. The church needed to serve the neighborhood. The woods was where those two needs met.

This is something, he thought to himself. You just can’t tell from the outside.

He coordinated with campus ministry Cru to enlist hundreds of college students to clear debris. They hauled out six tons of underbrush and trash. The church then partnered with the Baltimore mayor’s office and the US Department of Agriculture. They removed invasive species and ash trees felled by the emerald ash borer and planted more than 2,000 additional trees.

In the beginning, church members thought of the project as “Pastor Michael’s folly,” Martin said. But no one stopped him. And as he continued to work on it, recruit volunteers, and exhort the church to deepen their care for each other and their neighbors, the congregation started to think more of the woods as their woods.

They started gardening and keeping bees. A Johns Hopkins University ornithologist assessed the bird population. Martin rallied a group of teenagers to accompany him on the assessment. He watched as the scientist caught a bird and allowed the teens to get up close.

It’s a process he’s seen repeated over and over as people encounter the forest, which the church christened “Stillmeadow Community PeacePark and Forest.”

Research shows time spent in nature improves mental and physical health, but the same patterns of white flight that left Stillmeadow scarred and frustrated also led to a “nature gap” between white families and families of color.

Growing concern over this and other environmental issues, including urban heat islands and air quality, has increased interest in the Stillmeadow woods, Martin said. It sits at the nexus of his predominantly Black community’s concerns and the largely white-led environmental movement’s, bridging what he sees as an artificial divide between the two causes. “We should all be talking about the things that are helpful and healthy,” he said.

Rehabilitating a wooded area in a Black neighborhood was not only an environmental boon but also an investment in the well-being of that neighborhood. At the same time, those motivated by social justice for Black people required them to care about the health of these 10 acres of trees, Martin said.

Now, as he stands in the park and closes his eyes, Martin said he feels the joy and magnificence of a spring breeze, the magnitude of the rustling trees.

“These are things that point us to God,” he said.

In Michigan, Koning feels the same way. The more he attends to the Rush Creek watershed near his church, the more he is convinced that nature isn’t just an asset but rather is a critical need for people seeking God.

He’s been noticing more these days how much of Scripture takes place in an outdoor setting: from God speaking to Abraham to the psalms considering the heavens to Jesus walking around talking about the kingdom of God.

It’s a stark contrast to the book-lined, air-conditioned studies where most modern sermons are written, Koning said.

“We’ve made it an indoor religion.”

One time, he remembers asking his Christian Reformed congregation where they last felt powerfully close to God, ticking off the places Americans spend most of their time. The office? No. Home? Yes, for a few people. Church? Sure, sometimes.

When Koning said “Nature,” at least 80 percent of the people in his congregation raised their hands. He wondered if ministry should be so strictly an indoor activity.

The church dwindled a lot in the 2000s, going from about 300 members to 50 during the pandemic. Those 50, however, are mission-minded, Koning said, and committed to caring for their community. They have programs for people with special needs, people experiencing homelessness, and people struggling to get enough food.

A team also started cleaning up a small stream on the church property that flows into a nearby creek. They called it the “stream team.” It was just a small effort, at first, but then it caught the attention of state conservationists, who came in and taught the church volunteers how to monitor water quality.

Then, with the conservationists’ help, the church obtained $18,000 in grants from the Michigan Department of Environmental Quality to conduct a macroinvertebrate species survey—tracking and counting the dragonflies, mayflies, caddisflies, damselflies, and white heelsplitter mussels.

“God brought those about with purpose and design,” he said. “If they aren’t there, they can’t give glory to God.”

Getting to know the macroinvertebrates was a way to care for the environment, but for Koning it was also clear this work was about worship. He believes the degradation of habitat obscures the glory of God.

“Why are we muzzling God by sticking plastic in its mouth so that creation can’t speak?” Koning said.

The church now meets outdoors every other Sunday. They have designated one spot a “Creation Station,” where Koning teaches the children of the church from nature. They go outside, rain or shine, gathering around a fire if it’s cold—which is often in Michigan.

In 2022, the congregation decided to even change its name. The Christian Reformed Church is now The Refuge.

“We wanted to be known more for providing refuge,” Koning said, “not only for people but for pollinators, animals, and macroinvertebrates.”

Calling is funny like that. You love God and you want to serve, and soon you’re keeping careful track of creatures along a creek and proclaiming the Good News with macroinvertebrates.