Churches and state conventions would not be required to use resources.
Bob Smietana - Religion News Service|June 2, 2022 10:00 AM 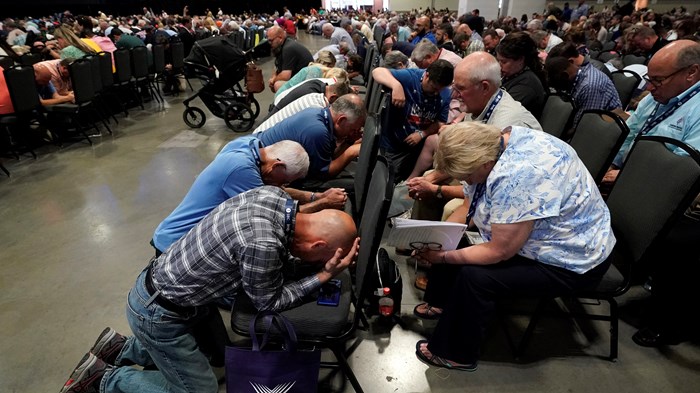 A Southern Baptist task force has asked the denomination to set up a “Ministry Check” website to track abusive pastors, church employees and volunteers, and to spend millions on reforms to prevent abuse. Most of the suggested reforms are voluntary and some could involve years of study and preparation, prompting a skeptical response from some abuse survivors and advocates.

Other suggested reforms, released on Wednesday, include hiring a national staff person who would receive reports of abuse and forward them to church leaders for a response; increasing training for churches; doing background checks on the trustees who oversee Southern Baptist entities; and encouraging state conventions to consider hiring staff to respond to abuse allegations.

The requests are part of a series of recommendations from the Southern Baptist Convention’s sexual abuse task force, which oversaw a recent investigation into how leaders in the 13.7 million-member convention have responded to abuse.

That investigation found that leaders of the SBC’s Executive Committee had shown callous disregard for abuse survivors—often demonizing or ignoring them—while working at all costs to protect the denomination from liability.

In response to the report, the task force has proposed two sets of recommendations.

The first set of requests—made to the Executive Committee, state conventions and other Baptist entities—are voluntary. That may make them ineffective, said Christa Brown, an abuse survivor and longtime activist, who called the task force’s recommendations disappointing.

“I don’t give much credence to suggestions and requests because they are toothless,” she said.

The task force will also ask local church representatives, known as messengers, to approve an abuse reform implementation task force during the SBC’s annual meeting in June. That task force would study abuse reforms recommended by Guidepost Solutions, the firm that ran the abuse investigation, and then report back in 2023. Among the Guidepost suggestions is creating a fund to care for survivors.

“They are kicking the can down the road,” said Brown. “I am gutted.”

If approved, the task force would serve for three years and would act “as a resource in abuse prevention, crisis response, and survivor care to Baptist bodies who voluntarily seek assistance.”

The task force would also work with the SBC’s Executive Committee and Credentials Committee, which has the power to kick churches that mishandle abuse out of the SBC.

Indiana pastor Todd Benkert, who played a key role in getting the abuse investigation approved during the 2021 SBC annual meeting, supports the recommendations, calling them a good first step toward addressing abuse.

He said it was important for messengers to approve the recommendations at this year’s meeting. Benkert said the success of those recommendations may be determined by the outcome of the SBC presidential race. Implementing any reform will take time and intentionality, he said.

“It won’t make any difference to vote for a new task force if we don’t also vote for a president that is willing to appoint people that support reform,” he said.

The current task force will report to the SBC annual meeting and then its mandate will expire. A new task force, if approved, would be appointed by whoever wins the 2022 presidential race.

“Over the course of the EC investigation, it has become clear to the Sexual Abuse Task Force that the process of implementing meaningful change in the Southern Baptist Convention in the area of sex abuse is beyond the scope of this current Task Force,” the report said.

The task force will also ask messengers to approve the Ministry Check website and a $3 million change to the SBC budget to pay for reforms.

If those Baptist groups are unwilling or unable to hire an independent investigator—and if state conventions or local associations cannot help—then abuse allegations could be forwarded to the staff coordinator for the website and an investigation could be paid for out of national SBC funds.

“The website will be established and maintained through an independent firm, selected by the Credentials Committee in consultation with the ARITF, and funded by the sexual abuse allocation request,” according to the recommendations.

The recommendations cite a 2004 study that found a high rate of recidivism among sex offenders.

“One of the problems in our churches is the ability of abusers to move from one church to another to perpetuate their abuse,” the task force said in its recommendations. “This often happens because churches don’t have the means to communicate with one another.”

One of the first responses to the recommendations came from Tom Ascol, a Florida pastor and leading candidate for SBC president. Ascol has been critical of the task force, claiming in a candidate forum that it had become “politicized” and saying local churches should handle any misconduct by SBC leaders.

“I am reading through the SATF recommendations for #SBC22 & looking for any Scripture reference & can’t find one, not even in the rationales,” he said on Twitter. “Did I simply overlook them?”

Tom Buck, a Texas pastor and Ascol supporter, said on social media that some of the task force recommendations are unbiblical.

Phillip Bethancourt, pastor of Central Church in College Station, Texas, and a former executive vice president of the SBC’s Ethics and Religious Liberty Commission, tweeted his support for the recommendations.

“These are common sense first steps we should take in Anaheim,” he said.

“I felt like the recommendations that they just announced are wise and are something that should be positively considered by the messengers,” he said of the delegates who will attend the upcoming annual meeting.

In a video posted on social media, Texas pastor Bart Barber, another presidential candidate, said it was important to follow the direction set during last year’s annual meeting and reaffirmed his support for the task force and investigation.

He said that the proposed task force was crucial in responding to abuse, saying it would help determine whether the SBC becomes “healthier or not in responding to and preventing sex abuse in Southern Baptist churches.”

The idea was eventually rejected by the Executive Committee in 2008, but staffers there kept a secret list of hundreds of abusers for years.

The SBC Executive Committee plans to meet this week.

Adelle Banks contributed to this report.