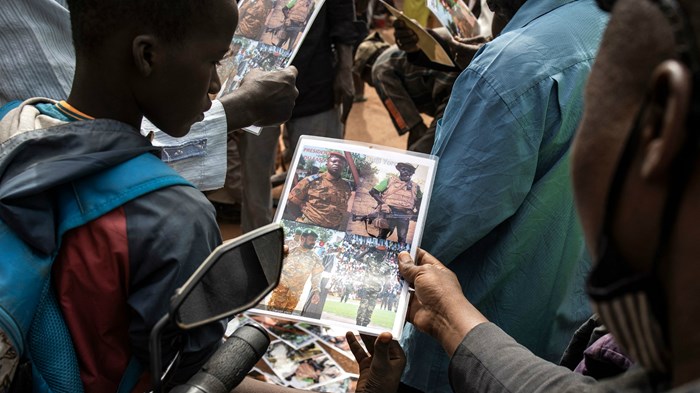 Image: John Wessels / AFP / Getty Images
A young boy looks at a poster of lieutenant-colonel Paul-Henri Sandaogo Damiba, new strongman and head of the junta, outside the Grand Mosque of Ouagadougou after Friday prayers on January 28, 2022.

There is “an epidemic” of military coups in Africa, says the head of the United Nations. The past year and a half witnessed the overthrow of governments in Mali (twice), Chad, Guinea, Sudan, and Burkina Faso. At least three additional attempts were thwarted in Madagascar, the Central African Republic, and Niger.

Averaging two per year for the last decade, this is Africa’s largest surge since 1999.

What should Christians in these nations do about it?

Abel Ngarsouledé of Chad, where roughly 45 percent of the Muslim-majority nation is Christian, is walking through it.

“It is not for me to support a military coup in my country,” said the secretary general of the doctoral program at the Evangelical University of Chad. “But if God wants to remove a king from his throne, [God] uses all the means in his power to restore his fear and justice in the land.”

When Chad’s president was killed on the battlefield last April, the army moved quickly to place his son in charge of a 15-member Transitional Military Council that would govern for 18 months, renewable once. Pledging to hold a national dialogue, invitations were sent to rebel groups, politicians, civil society, academics, and religious leaders—including Ngarsouledé.

With the council now delayed until May, he serves on two committees in a process designed to lead to reconciliation, social cohesion, and new elections. There are no guarantees any of these will happen, he says, and asks for prayer.

Also deputy director of the Council of Theological Institutions in Francophone Africa, Ngarsouledé recalled that at times in Old Testament history, God used prophets or priests to depose kings. Though today prayer should be employed, he is not so concerned about the end result.

“The form of the state is not the subject of biblical teaching,” he said, noting God’s priority for peace and justice. “It is men who adopt this or that form of governance, according to the orientation of their hearts.”

“Between democracy and autocracy, democracy seems to be the best suited at the moment,” said Samuel Korgo, director of the Institute of Theological and Artistic Education in Burkina Faso. “But certain coups come to relieve the populations of authoritarian, corrupt, and incapable regimes.”

The latter is what drove popular acceptance of the January 23 coup d’etat in the West African nation.

This included Christians, said Korgo, also an Assemblies of God pastor. Though only 30 percent of the population, Burkinabè Christians have historically been at the forefront of government. Not that this has helped democracy: The nation has been under military rule for 48 of its 62 years of independence, suffering eight coups in its history—a record for the continent.

Some concern is starting to seep in, however. The situation after successive coups in nearby Mali, including sanctions imposed by the Economic Community of West African States (ECOWAS), is feared in Burkina Faso, Korgo said.

The coup also undoes what had been promising democratic development, as 86 percent of the country viewed the 2020 election as “free and fair.” But since then, Burkina Faso has been pummeled by a jihadist insurgency that has displaced 1.5 million people. Over 3,000 schools have been closed, and nearly one-fifth of its 21.5 million population now needs humanitarian assistance.

The junta promised to restore control.

“It is the responsibility of the military to provide security,” he said, from his home in Gambia. “If they failed, they have no right to tell me they will do better if they are in government.”

In fact, the junta reappointed the same defense minister.

The first thing coup leaders do, Gomez said, is consolidate power. Often a messy endeavor, development becomes a secondary concern, and promised elections are simply a way to fend off international condemnation.

Contrary to the apparent continental trend, Gambia is one of Africa’s democratic success stories. A popular revolution dislodged its 20-year president in 2017, after he tried to overturn an election loss.

Last year witnessed the peaceful transfer of power in Malawi, Zambia, and Tanzania; since 2015, peaceful transfers also occurred in Liberia, Sierra Leone, and Nigeria. Across the continent, 73 percent of Africans want to choose their own leaders, and 76 percent want term limits.

In fact, stated the Institute for Security Studies, the continent is more democratic than other regions, relative to its level of development.

But the problem, Gomez said, is that too many governments do nothing to improve the status quo. Democracy itself is no balm and, in fact, can allow social evils the Bible condemns. But at least it gives the people a choice.

“Just because someone is doing something wrong, you don’t do wrong to fix it,” he said. “The worst civil leadership is better than the best military rule.”

“Military or civilian, it is not the main question,” he said. “It is who will help them live in peace.”

Djadi noted that most of the recent coup attempts have taken place in Africa’s volatile and poverty-stricken Sahel region—including his own nation of Niger. Only four months of rainfall determine yearly agricultural production, exasperating the underdevelopment that plagues many countries in Africa.

But the plague of jihadism killed 1,300 civilians in Mali, Niger, and Burkina Faso alone last year, reaching 3,500 casualties since 2015. The people have had enough.

“Let’s wait and see if these coups change things for good, on the ground,” he said. “It is not the place of Christians to support or oppose.”

Instead, Djadi placed much onus on the international community.

Western nations have a responsibility to help. But repeating the same mistakes made in Iraq, their focus is primarily on the military response to jihadism. Yet it was their intervention in Libya that induced regional chaos, sparking the southward movement of Islamic extremism into the Sahel.

Mali is now kicking out its French counterterrorism partners, as Russian mercenary troops enter the country. Russian influence is also established in Libya and the Central African Republic and rumored to be in Burkina Faso, Sudan, Chad, and Mozambique.

The people are not interested in geopolitics, said Djadi. Simply desiring security, they instead suffer under the weight of punitive economic sanctions. ECOWAS has taken a different approach with each coup leadership, depending on their willingness to work together for democratic restoration.

Djadi strongly opposes these sanctions, however, and calls for greater cooperation in development. The church is a capable partner—when not the target of attack—and contributes to socioeconomic welfare through its many schools, hospitals, and aid organizations.

“It is the responsibility of the worldwide church to support the body of Christ,” he said. “But the Sahel is not getting the attention it deserves.”

John Azumah, executive director of the Lamin Sanneh Institute at the University of Ghana, agrees with much of this—but not all. Economic sanctions are damaging. Within the Sahel, security is the necessary priority for Christians. And African governments have failed at supporting democracy with development.

But Azumah reflected on his nation’s two decades of successful multiparty governance and from whence it came. Ghana ranks third in African coup attempts with 10, five of which have been successful.

Juntas do not bring the stability they promise.

“The church has been at the forefront of the struggle against dictatorship,” Azumah said. “But it did not run deep, and our seminaries have failed in public theology.”

Democracy is certainly the most suitable governing system for Africa, he said, guaranteeing freedoms and sustaining minority communities. But it has also been a vehicle for corruption, and the church has often been compromised.

Even when not involved, it has regularly sided with power.

“It is not the place of the church to rally for democracy but to rally for the people,” Azumah said, stressing the need to be nonpartisan. “Uphold the principles when the nation grows disenchanted, but always call out the abuses.”

Such pessimism is rampant in Africa—and worldwide. Freedom House recently noted the 14th consecutive year of global democratic decline. Of the 12 largest drops, seven are sub-Saharan. Only 9 percent of the sub-Saharan population lives in seven “free” nations, the lowest tally since 1991.

Similarly, Afrobarometer noted that of 15 surveyed nations since 2011, only Sierra Leone registered an increase in support for elections. And across 34 nations, only 43 percent are satisfied with how democracy works in their country.

This is why Ngarsouledé has gotten involved.

Chairing one committee and serving as rapporteur (secretary) of another, he interacts with senior army officers, government officials, academics, businessmen, and civil society activists. Though there is open discussion and a commitment to religious liberty, sometimes it gets partisan.

“It is precisely at this strong moment of debate,” he said, “that I make myself heard.”

Most sources reported a growing Christian realization that engagement in politics is necessary. Despite his critique, Azumah pushes the issue in Ghana’s seminaries. Gomez aims to raise a new generation of leaders among his college students. And Korgo said the holistic dynamic of the gospel demands that Christians fight against poverty and corruption.

But pastors, these leaders said, should avoid public politics.

Opinions among African Christian leaders differ about democracy and military coups. But regardless of the system, the political expression of sinful nature is hardly confined to Africa.

“As citizens of heaven, we serve God within our nations—and beyond—based on Christian values,” said Ngarsouledé. “It is among this corrupt and perverse generation that Christians are called to live their faith.”