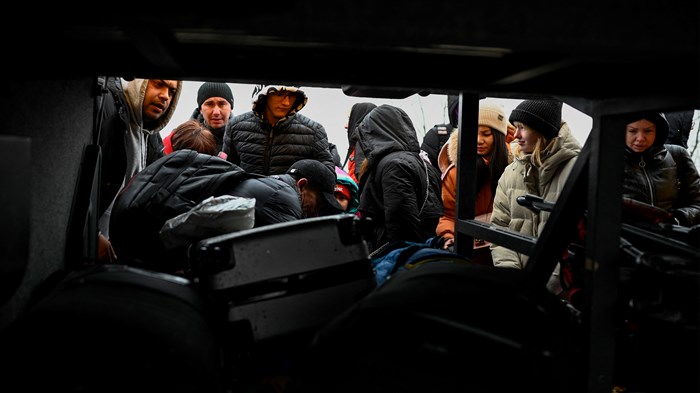 Eugen Cozonac has spent the past week focused on refugees.

More than 112,000 have crossed Ukraine’s southwestern border into his home country of Moldova, a landlocked nation that’s not much bigger than the state of Maryland. As a cabinet-level director within the government, Cozonac arranged facilities to receive donations and house refugees—everywhere from exhibition halls and sports complexes to film studios and resorts.

As he worked on Tuesday, his cellphones pinging from companies and volunteers, Cozonac paused to remember a certain group of refugees who had come to the capital city of Chișinău to escape an invasion from Russian-backed fighters: his own family.

It was on March 2, 1992—30 years ago to the day—that the Transnistria War erupted in the area now along the Moldova-Ukraine border. Cozonac was a kid at the time, fleeing with his parents and brother. Their house was bombed.

Like fellow Eastern European neighbors and the rest of the watching world, the people of Moldova did not expect the recent Russian invasion of Ukraine to happen so suddenly, to send a million people from their homes in just a week. But they have long known the threat from Russia.

On Wednesday, Moldova applied for membership into the European Union (Ukraine and Georgia have as well), and its president reiterated a call for Russia to withdraw the 1,000-plus troops that have remained in the country since the war three decades before.

Amid the escalating violence and the steady demand for humanitarian aid, Cozonac said he’s been able to stay focused in part because of his experience as a refugee and the faith he discovered then. During his family’s displacement, Cozonac started reading a children’s Bible and attending church. Now, he says, “I have a sense that I’m in the right place at the right time, in God’s providence.”

Evangelicals have also kept focused on what they can do to serve the initial wave of refugees—about half of whom are passing through on their way to Romania and half of whom need to stay longer. The demand for assistance has taken their minds off their grief over Ukraine and the possibility of violence coming their way.

Cozonac’s church had begun planning for refugees about 10 days before the war began. Kishinev Bible Church, Church Without Walls, Mission Eurasia, and others from Moldova’s evangelical minority have been showing up around the clock at border checkpoints, with vans full of supplies and offering free rides to shelter.

They’re manning tables with water, sandwiches, and Bibles and telling weary arrivals where they can go to warm up, get a free SIM card, or just rest.

“If you’re sitting and thinking, you’re worrying about things you can’t control,” said Evghenii “Eugene” Solugubenco, pastor of Kishinev Bible Church. “We’re going to do the work that’s in front of us. We’re going to help that person and then help someone else.” 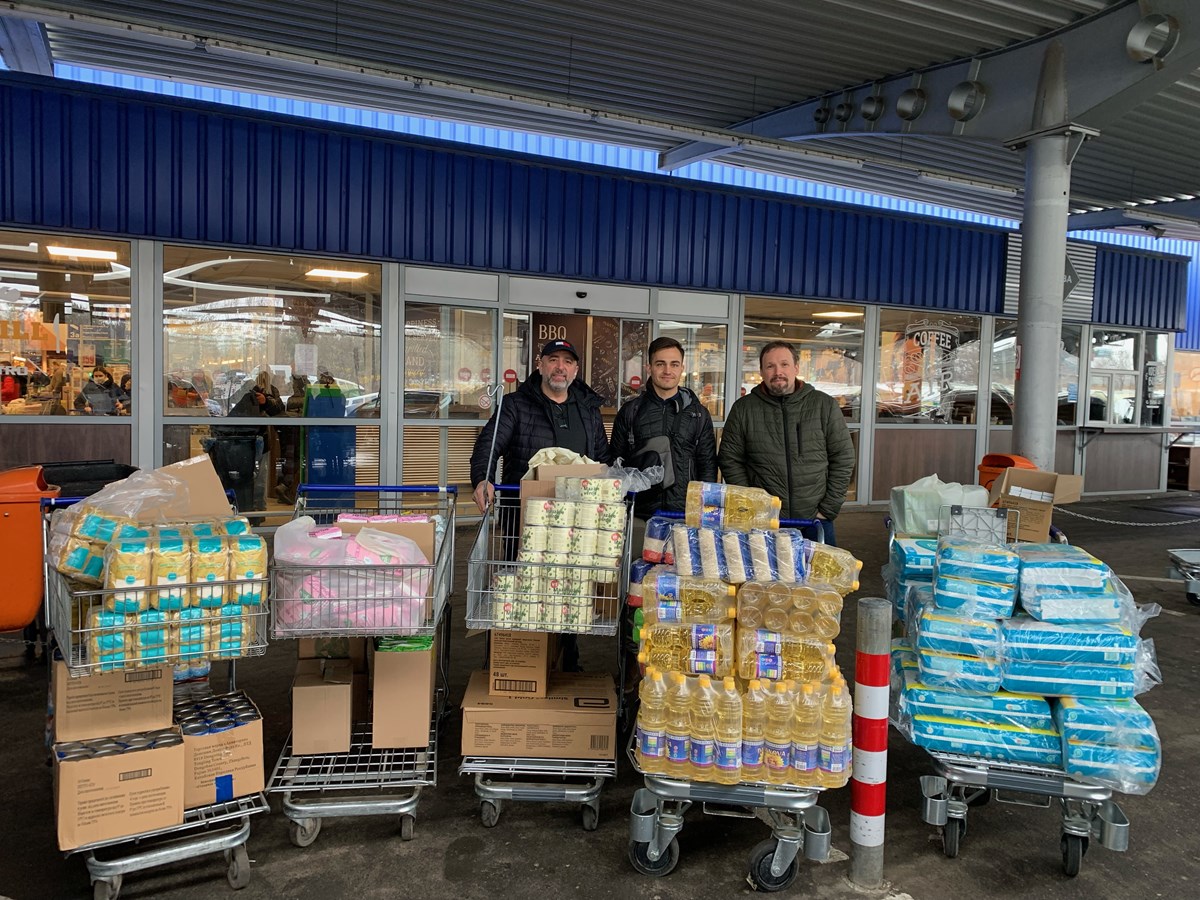 Kishinev Bible Church set up a booth about a mile into Ukraine to offer food, information, and spiritual care 24/7 to people while they were still in the lines, where they’ve had to wait for half a day or more to enter Moldova.

In Chișinău, Cru and Church Without Walls turned their buildings into refugee hostels, with pastor Alex Belev immediately announcing that the church was “ready” and willing to help. Cru has hosted up to 80 people a night, and local ministries bought a laundry unit and refrigerator for the building. Similarly, among the Eastern Orthodox (90% of the population), monasteries have also opened up to new arrivals. Christian summer camps have offered up their spaces too, but those will be a last resort since many don’t have heat and it’s below freezing at night.

Belev is meeting people at the border crossings each day. On Thursday, at the Palanka crossing point, he connected with a family with 15 children: 12 foster children and three homeless children they picked up on their way.

“They are not denying entrance to anyone, even if the person doesn’t have all the right documents for them, their children, or their transportation,” said Belev, who arranged for the family to get food and shelter while they procure the documents to travel into Europe. “Every person can be safe from war, from threat to their lives. Every person who arrives to the territory of Moldova receives food, accommodation, warmth, and care.”

More than 1,400 families from Protestant churches have signed up to receive and help refugees, said Nicholai Vozian, president of the Union of Churches of Moldova, in a call on Monday. He told the Council of the Euro-Asian Federation of Evangelical Christian-Baptist Unions that churches were “overburdened.” 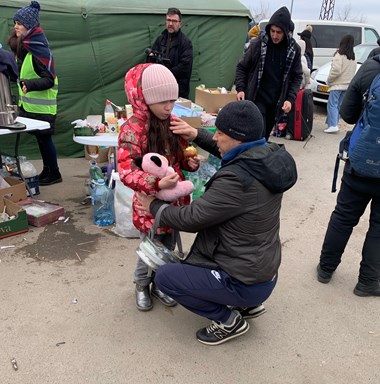 Moldovan evangelicals minister at the border with Ukraine.

But leaders say they also sense God at work in their efforts. Solugubenco described seeing “small miracle after small miracle” with how smoothly the partnerships have gone between his community, fellow Christians, and the government.

Over the weekend, he shared on Facebook that the church spent $3,500 on a vanload of food and supplies like toilet paper for the refugees, and a donor immediately sent $3,500 to cover it. Within the past couple days, a Samaritan’s Purse team has arrived to help too.

After last Sunday’s service, when he preached in Russian on the faithfulness of God, Solugubenco spoke with refugees attending for the first time. There was a “big old guy” from Mykolaiv who came to Moldova with his family. He was feeling useless and wanted to help. Solugubenco turned around, spoke with a member of the congregation, and arranged for the refugee to get a woodworking job.

After past struggles with corruption, Moldovans are now scrambling to help in any way they can and even trusting the government enough to send them money to assist with humanitarian aid. Cozonac returned to his homeland last August to serve in the new Moldovan government after 20 years living in the US. He sees the current generosity as a signal that “a new set of values” taking hold.

“What struck me upon returning from the diaspora,” he said, “was how many people started telling me, ‘I pray’ … or how many people throw in their speech ‘Lord-willing’ or ‘we need to pray about that.’”

Cozonac believes people’s greater willingness to acknowledge God and faith at peacetime—by Orthodox and Protestant alike—has led to this greater desire to love their neighbors.

Especially during the first several days, the refugees arrived traumatized and overwhelmed. They’d continue weeping or remain silent when Christians went to speak with them.

“So then we just open our arms, and if they are willing, we hug them and start praying for them. In our prayer, we ask God for peace, God’s mighty mercy, and protection for everyone,” Belev said, asking for Christians around the world to pray for endurance so the church in Moldova can continue to minister to the refugees. “The Scripture passages that we mainly share with them are those that that talk about God who can restore destroyed lives, destroyed country, and about a sovereign God who can intervene into any situation.”

1 of 2
Alex Belev (left) and Eugene Solugubenco (right) shop for supplies for refugees.Moldovan evangelicals minister at the border with Ukraine.
expand