Christian pro-life activists have their eyes on a record-high number of ballot measures, including state constitutional amendments.
Megan Fowler|October 28, 2022 10:00 AM 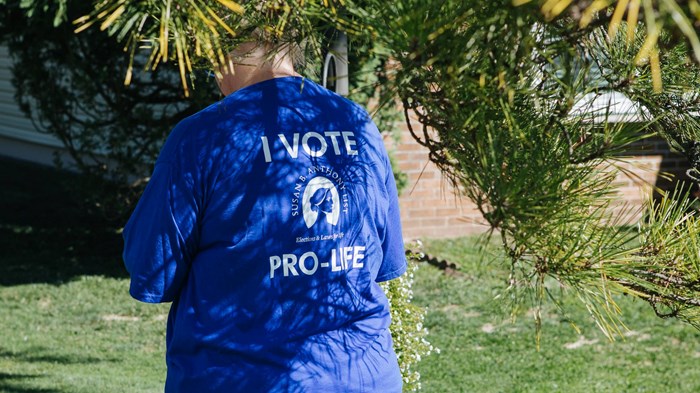 Image: Michelle Gustafson for The Washington Post via Getty Images

For decades, pro-life advocates argued that overturning Roe v. Wade would enable each state to determine its own abortion policy. Abortion measures will appear on five state ballots on Election Day this year, the most in US history.

But the country got its first glimpse at post-Roe abortion referendums months before November 8. Back in August, Kansas became the first state to vote on abortion rights, rejecting a ballot measure declaring the state constitution “does not require government funding of abortion and does not create or secure a right to abortion.”

Activists saw the outcome, fueled by record turnout from young women, as a sign of enthusiasm from pro-choice voters. Last week, Pew Research Forum released its latest polls, which show that Democratic voters are nearly twice as likely as Republicans to consider abortion a very important issue (55% to 29%).

Soon, voters in Michigan, California, Vermont, Montana, and Kentucky will also vote on the issue of abortion rights without a federal abortion law in place.

“My hope is that the Kansas amendment’s failure can serve as a reminder that the deliberate and thoughtful work of the pro-life movement must continue as we change one heart at a time, state by state,” Southern Baptist Ethics and Religious Liberty Commission president Brent Leatherwood said in August.

Christian pro-life advocates warn the proposed changes up for vote in Michigan and California go far beyond the right to an abortion.

In Michigan, a 1931 law outlawing abortion took effect after the Supreme Court issued its decision in Dobbs v. Jackson Women’s Health Organization in June. Though Michigan attorney general Dana Nessel promised not to enforce the law, abortion providers filed suit in April 2022 arguing that the law is unconstitutional. A state court judge agreed, and in September she invalidated the law.

Now voters in the Great Lakes State will decide whether “reproductive freedom” belongs in the Michigan Constitution. But the language in Proposal 3 opens the door to consequences beyond abortion access for adult women. Christen Pollo, spokeswoman for Citizens to Support MI Women and Children, raised concerns that the Michigan ballot initiative bestows reproductive freedom, including the right to an abortion and sterilization, on every citizen, including minors. While the amendment is billed as restoring Roe, “we’re giving children the right to abortion and sterilization,” Pollo said.

Since abortion is currently legal in Michigan, Proposal 3 has unnerved even some progressives.

“This is not a left and right, a Christian or atheist issue. It’s not about whether we want to grant freedom or autonomy,” said Caroline Smith, the PR director for Progressive Anti-Abortion Uprising. “It’s about common sense and understanding that women deserve better than Prop. Three.”

“We have seen across the board overwhelmingly that this is not about partisan politics,” Pollo said. “It’s not even about pro-life versus pro-choice. People across the spectrum are voting ‘no’ because it’s too extreme.”

California voters will decide on an amendment to the California Constitution stating, “The state shall not deny or interfere with an individual’s reproductive freedom in their most intimate decisions, which includes their fundamental right to choose to have an abortion and their fundamental right to choose or refuse contraceptives.” The amendment needs a simple majority of votes to pass.

California allows abortion until the point of fetal viability and later if necessary for the mother’s life or health. The state’s Reproductive Privacy Act, passed in 2002, specifies that women have a “fundamental right to choose to bear a child or to choose and to obtain an abortion.”

Opponents of California’s ballot initiative warn the new language places no limits on abortion, opening the door to late-term abortions.

“It is hard to read this text and not think that it is designed to legalize all abortions, including late-term, third-trimester abortions of healthy babies from healthy mothers,” John Gerardi, executive director of Right to Life of Central California, wrote in the Fresno Bee.

In Vermont, voters will decide on a constitutional amendment stating that “an individual’s right to personal reproductive autonomy is central to the liberty and dignity to determine one’s own life course."

Abortion is already legal in the state, and adding it to the state’s constitution would prevent future voters from abolishing abortion by overturning current laws. Like California, the Vermont ballot initiative needs a simple majority to pass.

In Montana, pro-life groups hope to establish protections for all children born alive, even those born after an abortion.

The law would require that infants who are born alive after an attempted abortion, an induced labor, a cesarean section, or another method receive medical care, and it would impose fines or prison sentences on medical professionals who failed to provide such care. According to the Family Research Council, 18 states currently have similar laws.

Voters in Kentucky will decide on Constitutional Amendment 2, which states that nothing in the Kentucky Constitution gives citizens the legal right to an abortion.

According to Kentucky state Rep. Joseph Fischer, Constitutional Amendment 2 “assures that no Kentucky court will ever be able to fashion an implicit right to abortion from the language of our state Constitution. There will be no Roe v. Wade decision in Kentucky.”