The Bible-based video game company TruPlay and the charity Compassion International step into the crypto world.
Liz Lykins|October 11, 2022 10:00 AM 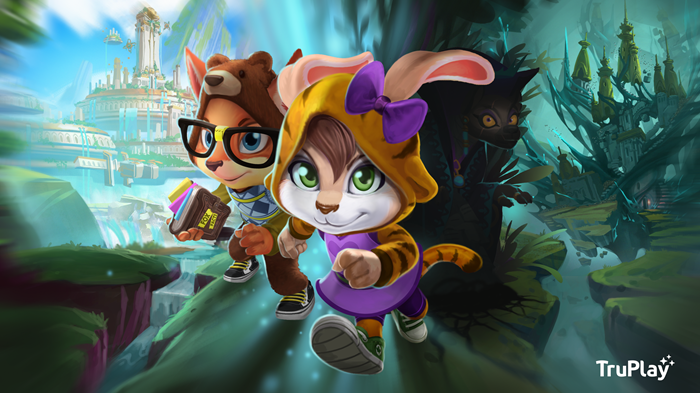 Image: Courtesy of TruPlay
Oliver, a fox in a bear costume, and Maple, a bunny in a tiger costume, are characters in the RhymVerse, which recently held its NFT launch.

With big green eyes, Maple the bunny dons a bright orange tiger costume. A character in the Christian video game world called RhymVerse, her loyal and courageous personality carries her through her heroic adventures. She and her friends must face dark forces in games like Maple and the Forest of Words.

Last month, designs of Maple and six other characters were sold as non-fungible tokens (NFTs) by TruPlay, a Christian entertainment company that offers a variety of family-friendly mobile games.

NFTs like Maple are digital art pieces that can be bought and sold. When they are bought, the rights to that unique piece of art are transferred to the new owner, said TruPlay CEO and founder Brent Dusing.

In the case of the RhymVerse characters—which TruPlay says represent the first and biggest NFT release from a Christian tech company—the NFTs are a way for families to back their video game venture. Dusing said it’s “like a next-generation way to get the community involved in helping to build and support financially things they want to see.”

From South Africa to the Philippines, Christians purchased TruPlay’s first 6,650 Genesis NFTs within 10 minutes of their release, according to the company’s press release.

While TruPlay sold the NFTs for free, consumers then sold, bought, and traded them after that, with the company earning 10 percent of these transactions. The secondary sales of the NFTs yielded more than $200,000 in volume on OpenSea, the world’s largest NFT marketplace. In the first 24 hours of sales, the company placed in the Top 10 on OpenSea globally.

Dusing said he was amazed by the response and thanked God. To him, offering NFTs as a Christian company follows a long tradition of Christian involvement in the forefront of cultural movements and art.

“Jesus met people where they were … and where they are right now [is] on screens,” said Dusing. His previous venture, Lightside Games, grew to reach 7 million players—a third of whom were non-Christians, he said. With more than $20 million in investor capital, TruPlay plans to release interactive Christian games in 2023.

Other Christian groups, including charities and nonprofits, have ventured into the NFT realm with mixed success.

Utilizing NFTs can have both pros and cons for Christian organizations, said Adam Graber, cohost on the technology-focused Device & Virtue podcast. While NFTs are currently grabbing headlines, he’s unsure how long the tokens’ popularity will last. Overall NFT sales on OpenSea have dropped for five straight months.

Graber explained their connection by comparing them to the game of Monopoly: Cryptocurrency is the Monopoly money, while NFTs are the properties. Properties can change in value based on various characteristics.

“Crypto enthusiasts are still trying to make the case for what the value of both crypto and NFTs is, and until they successfully do that within sort of a market economy, there is going to continue to be skepticism around NFTs,” he said. “I think art has true value, has real value. I have yet to see NFTs convey some of that real value.”

Still, NFTs could be used to positively impact Christian organizations—namely, as fundraising or promotional tools, he said.

The nonprofit Compassion International raised money to support college scholarships for students in Haiti through virtual reality NFTs depicting Haitian landscapes. Released in July, the VR pieces combined art and technology to appeal to buyers. Sales of its NFTs resulted in more than $220,000 during the initial mint and more than $3,400 from secondary sales in OpenSea.

A group called Reformers NFT created a collection of NFTs based on Christian leaders in March. Featuring figures like John Calvin and Martin Luther, it has more than $8,000 in sales volume. The group, which calls itself “a pioneering community of Christians,” created the pieces to help Christians embrace technology, according to their OpenSea Site.

For a church in Zurich, Switzerland, NFTs were not only a fundraiser tool but also a way to try to incorporate trending technology into its mission. International Christian Fellowship (ICF) Church has always tried to be on the leading edge of new technology, said Simon Egli, head of the digital ICF Zurich team.

ICF, the mother church in a movement of more than 80 congregations across Europe, began offering members the chance to donate using cryptocurrency in 2018. Its crypto tithe option went viral, making its way across news sites and even landing on Bitcoin’s news platform.

“One of our values is being relevant—being a relevant church in the midst of our society,” Egli said. “Our team is always looking for new ideas, new solutions, finding smart solutions because our resources are limited.”

When a year ago a staff member with NFT experience joined their team, church leaders decided to try the emerging technology. The church created a series of Worship Music NFTs that reinvented songs written by the church’s band, ICF Worship. However, the music files have yet to sell on OpenSea. These musically focused NFTs might be ahead of their time, Egli said.

Dusing helped generate interest in the TruPlay NFTs by allowing followers to vote on the designs of the characters. For example, Noah the kangaroo, based on the vote tally, donned a shark outfit.

At the start of 2022, commentators Stephen McCaskell and Patrick Miller wrote for CT about the “new world of possibilities for creatives, content creators, businesses, churches, and parachurch organizations” with the launch of NFTs and the potential of digital ownership. They said, “Now is the time for believers to start thinking, programming, developing, and creating in that space.”