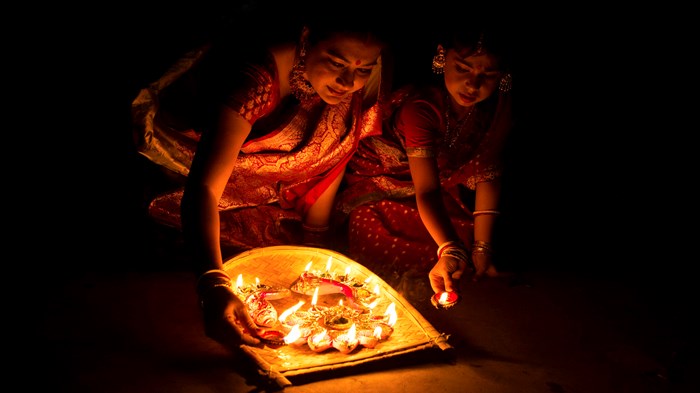 Rivaling the scale of Thanksgiving or Christmas in the United States, Diwali has become India’s biggest holiday season.

The Festival of Lights (also known as Deepavali) marks the start of the Hindu New Year and is the faith’s most important festival, celebrated for five days by more than a billion people in India—not only by Hindus but also by Jains, Sikhs, and some Buddhists—as well as across the Hindu diaspora.

The festival symbolizes for its devotees the triumph of good over evil, light over darkness, and knowledge over ignorance. Diwali is marked by feasts, lighting clay lamps outside the house to banish evil spirits, decorative lights, prayers, family gatherings, exchanging gifts, burning firecrackers, and doing charity, besides worshiping at homes or visiting temples.

Each year the holiday falls on different dates in the Hindu lunar calendar determined by the position of the moon, usually between October and November. This year, the festival is observed from October 22–26 with Diwali falling on October 24.

Various legends are associated with the origin of Diwali, an important harvest festival in the subcontinent’s ancient past.

In northern India, the holiday commemorates the return of Prince Rama to the Uttar Pradesh town of Ayodhya along with his wife Sita (an incarnation of the goddess Lakshmi) and his younger brother Laxmana after 14 years of exile, according to the Hindu epic Ramayana. In southern India, Diwali honors the victory of the major Hindu deity Krishna over the demon Narakasura. In the Indian state of Bengal, the goddess Kali is worshiped during the holiday.

The festival begins with Dhanteras, where people purchase gold, silver, new clothes, gadgets, automobiles, and other items as a sign of good luck. They also worship Lakshmi, the goddess of wealth, prosperity, and good health, as well as Ganesha, the lord of intellect and wisdom, and Kubera, the demigod for material prosperity.

The second day is Narak Chaturdashi, also called “small Diwali.” People decorate their homes with lamps and make designs on their doorway or inside the house with colored sand, powder, rice, or flower petals called rangoli.

The third day is “big Diwali,” where devotees may visit temples. They light their homes and get together to burn fireworks at night.

The fourth day is Govardhan Puja, where people worship Krishna ,and for many this marks the new year and they exchange gifts.

The fifth and last day is Bhai Duj, which celebrates the bond between siblings.

Some of today’s cultural practices of Diwali have historical spiritual significance:

Firecrackers: When Rama returned to Ayodhya from exile, the Hindu scriptures mention the decoration and atmosphere of the festivities but there is no direct mention of firecrackers. Some historians claim the practice comes from the influence of China, where firecrackers are used to scare away evil spirits .

Clay lamps: Many Hindus believe that lighting such lamps protects against negative energies and bad spirits . In Odisha, people pay homage to their ancestors and call upon them to visit and bless them.

Rangoli: Drawing rangoli design patterns at doorways is considered sacred and believed not only to invite good luck but also to ward off evil spirits and bad luck.

CT interviewed Christian leaders in the majority Hindu nations of India and Nepal—as well as neighboring Sri Lanka, Bangladesh, and Pakistan—in order to better understand what South Asian followers of Jesus do during the festival, whether they think Christians should join in Diwali celebrations, and whether churches conduct outreach to Hindus during the holiday.

We as Christians celebrate only Jesus, so we do not celebrate Diwali in our homes. But we connect and engage with Hindu friends during Diwali. We live in a community with different religions and orientations and we use every opportunity to love people and to show God’s love.

We give a special invitation to our Hindu friends in our regular satsang (sacred gathering, or church service) during the week of Diwali. It is important to engage with people—to visit them, to interact with them. We visit Hindu friends who invite us during Diwali and eat with them. We do not consider it a religious thing, and believe that love has no boundaries.

Diwali is a major festival, commonly known as Tihar by locals, in Nepal. Churches in Nepal do not indulge in outreach programs to the Hindu community, but many churches at the provincial level organize fellowships for new converts from a Hindu background. It is a difficult time for those whose families have been celebrating Diwali for generations and since their childhood to suddenly have nothing to do with the festival.

I come from a strong orthodox Buddhist background, and for the first few years it was very difficult for me to ignore Diwali. It took me a long time, as I coped with not participating in or celebrating the festival.

Based on my own experience, I believe there are many young people who need encouragement. They might not know why they celebrated Diwali, but they have been involved in the celebration since their childhood and suddenly cutting themselves away is hard. It is important to educate them that Jesus is the Light of the world. Christ is the one who brings us from darkness to light.

We don’t need to ignore all the good things in our Eastern culture, like our cultural dresses which are elegant and sober and treating guests very kindly and showing hospitality. We must teach our younger generation and the recent converts about which things are cultural and which are related to religion. We are living in an inclusive society, but (at times) we must be exclusive based on our precious faith that is deeply rooted in Christ. Our target is to educate, encourage, equip, and empower local believers.

Diwali holds a special place in the Sri Lankan culture, and Tamil Hindus celebrate Diwali with great pomp and show. I wish all my Hindu friends, “Happy Deepavali.” Though Christians here do not celebrate Diwali in their homes, we live in a community with Hindu (and Buddhist) neighbors, and we go to Hindu homes when invited for Diwali to be a part of their celebration.

Though Diwali is celebrated by Hindus in our country, there is no public holiday for the festival. I have not heard firecracker sounds during Diwali. People do light up their homes, but the atmosphere of festivity is not felt in the city of Dhaka. On the other hand, Durga Puja is celebrated as the largest festival of the Hindu community—maybe because of the influence of neighboring West Bengal. The church does not do any outreach program during Diwali. If our Hindu friends invite us to their homes, we don’t mind going.

The Hindu community in Pakistan fearlessly light their homes, burn firecrackers, and celebrates Diwali. Churches in Pakistan do not celebrate it. As a human rights defender for minorities, I organize and participate in interfaith harmony meetings where representatives of every faith community participate.

Diwali in Pakistan is considered as a religious festival and is celebrated by the Hindu community only. To show love and respect, some individual Christians may attend their celebrations but are very clear on their lines of not being a part of the worship ceremonies. Christians would not light clay lamps or burn firecrackers in their own homes. Pastors would not indulge in intermingling with Diwali celebrations at all, and churches do not do any outreach.

We decorate the school during Diwali and involve the children in various activities related to the festival like craftwork, but I discourage them to burn firecrackers because they cause a lot of air and noise pollution and are harmful for animals besides humans. I am a Christian, so I do not decorate or light clay lamps or decorate rangoli in my own house.

I participated in a lot of rangoli competitions in my school days. Since I became a Christian, I have never lit clay lamps or burst firecrackers or made a rangoli. I am an artistic person, and I would have loved making rangoli patterns at my doorway, but I had a hint that there is spiritual significance to making rangoli thus I haven’t participated. I am keen on knowing the spiritual aspects of all that we indulge in without proper knowledge.