A new position at Holy Trinity Brompton reflects growing concern about climate change among some Christians.
Ken Chitwood|September 16, 2022 10:39 AM 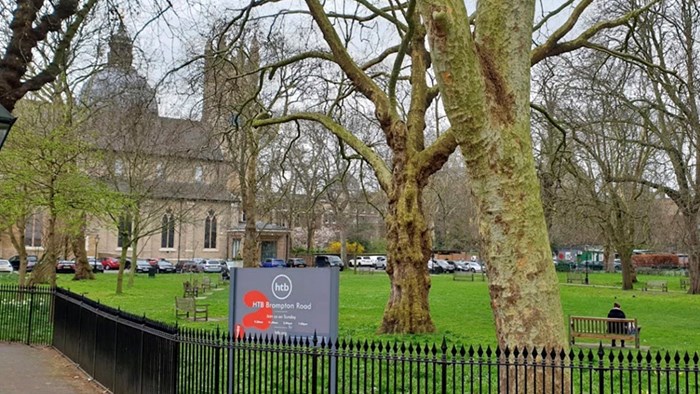 The job ad was a little different than the ones normally posted by London’s largest churches. It wasn’t for a pastor, priest, choir director, or organist. Instead, the large evangelical Anglican congregation wanted an environmental project manager.

Holy Trinity Brompton (HTB), perhaps best known as the birthplace of the evangelistic Alpha course, has advertised a position for someone who will help “oversee the strategy, planning and execution of HTB’s approach to Creation Care.” The individual will work closely with other lead team members to put an “environmental response at the heart of church life.”

Jobs like this at places like HTB are notable, said Jo Chamberlain, national environment policy officer for the Church of England. Such roles, she said, signal a sea change. Evangelical churches in the UK—and perhaps elsewhere—are embracing the critical importance of creation care and environmental stewardship at the congregational level.

“People are recognizing that we have to get our house in order,” Chamberlain said. “We can’t just talk about taking care of creation without doing the work and changing the way we do things.”

HTB has six sites in London with around 3,500–4,500 worshiping every Sunday. It has planted 130 churches in England and Wales and become influential enough that some have called it the “centre of British evangelicalism.” The new staff member will help the six sites develop plans to be recognized as “eco churches” in five to seven years.

The “eco church” designation is awarded by A Rocha UK, part of an international network of environmental organizations with a Christian ethos, for churches in England and Wales who “want to demonstrate that the gospel is good news for God’s earth.” According to the organization’s website, there are currently more than 5,000 churches enrolled.

To start the process, churches examine how their worship practices, teaching, building use, land use, community engagement, and lifestyle choices are “caring for God’s earth”—or not. The self-audit includes questions about whether the church’s children’s ministry teaches about caring for God’s earth, whether buildings are energy efficient, and if some of the congregation’s property has been set aside for native wildflowers. A Rocha then makes suggestions for how congregations might take further actions to improve their “eco church” status.

Getting eco status will just be the start, said Mark Elsdon-Dew, HTB’s director of communications. The bigger goal is to kickstart a culture change at HTB that will “transform the way we do things more permanently,” he said.

The project manager is a fixed-term, one-year position, but Elsdon-Dew said HTB hopes the individual will shift things across the church. Immediate areas of improvement may include creating a carbon-neutral website, using more biodegradable consumables, and installing LED lighting. Longer term, the church wants to see broad cultural changes.

Elsdon-Dew said those changes could reach beyond HTB to influence evangelical Anglican churches around the UK. Those planted by HTB may be eager to pursue eco church recognition too. Church planters and the network of churches tend to replicate HTB’s culture in their own context.

“They are eager to pick up on ‘new vibes’ at the home church,” he said.

At the same time, he said, HTB is not trying to be a trendsetter.

“We don’t do this kind of stuff to make a point,” he said. “We go ahead and do our stuff, go as far as we possibly we can, and leave the rest to the Holy Spirit.”

Ruth Valerio, director of advocacy and influencing at the international Christian relief and development agency Tearfund, said she is seeing more Christians and churches like HTB grapple with their role in combatting climate change.

“Creation care used to be very much a fringe issue that wasn’t understood or embraced by the mainstream church,” she said. “As the reality of the climate crisis becomes clearer, and as vulnerable communities around the world begin to feel its devastating effects, Christians have rightly increased their response."

For her, the most significant development is how churches are beginning to frame creation care as a core part of their ministries.

In the Church of England, more than 40 environmental officers work along with a growing network of activists, theologians, grounds managers, and local environmentalists who help congregations take practical steps on energy usage and nature conservation and connect them with other people active in their communities.

“Sometimes, the fix is simple, but often it’s complicated,” Chamberlain said. “You’re going to need someone to manage and oversee the process.”

Even so, Chamberlain occasionally gets pushback from those who feel creation care and environmental stewardship distract from what they see as the church’s principal work of evangelism. But, Chamberlain said, “creation care is part of the gospel, it’s a fundamental aspect of loving our neighbor, it’s key to our mission.

“I don’t think you can do mission unless you are getting environmental stuff right these days,” she said. “This issue is so prominent in the UK; this is actually a matter of accountability for churches.”

That’s why she is particularly encouraged to see a prominent institution like HTB taking a committed step to emphasize creation care in the church’s day-to-day life.

“It is important for a church that is passionate about evangelism, like HTB, have something to say about the environment,” she said. “It is perhaps saying this is an issue of credibility for churches, not just a ‘nice to have.’”

“This feels like a significant change for a network that, previously, has not shown a great deal of interest in environmental issues. It made me wonder whether other big evangelical churches or networks in Europe or North America were hiring similar roles,” he said.

But even churches that don’t have the budget for a new position can take steps towards prioritizing creation care, Conant said. They can start by supporting people who want to walk or bike to church, planting trees and installing solar panels, or divesting from oil and gas companies.

“All of this helps show that we are living in a world God loves,” Conant said. “We’ve got to do this as churches, because when we understand the impact these things have on our neighbors, we realize this is gospel work, not because we are progressive or woke or anything—but because we are Christian.”

The new position is scheduled to start in mid-October.