In the century since the arrival of Protestant missionaries, the church has been wiped out by genocide and forced to rebuild. Now “it’s time for the gospel to shine.”
James Thompson|January 25, 2023 12:08 PM 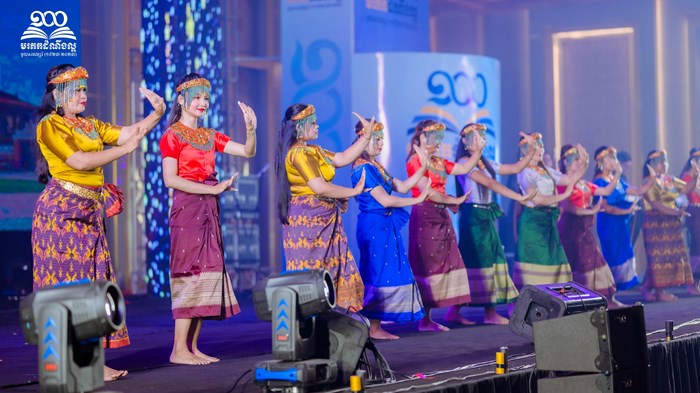 Image: Courtesy of Pisit Heng
Christians gathered for a kickoff to the anniversary celebration in 2022.

A festival celebrating the 100th anniversary of Protestant Christianity in Cambodia is coming up this weekend, and Navy Chann’s phone won’t stop dinging.

“Sorry, I have like ten Telegram messages coming in at the same time,” said Chann, executive secretary on the committee planning the celebration, which local believers expect will be the country’s biggest Christian event ever.

The Cambodia Gospel Centennial Celebration is a two-day festival in Phnom Penh commemorating the arrival of the country’s first Protestant missionaries in 1923. Chann and fellow Christian leaders have spent over two years planning the event.

During the final week of preparation, they have stayed in almost constant contact to ensure that every detail is perfect and the celebration’s vision statement is fulfilled: that Cambodia would become “the aroma of Christ in Asia and around the world.”

A large open-air exhibition area with an elaborate layout will welcome those who make the journey to the capital’s Diamond Island district, with zones for exhibitions, concerts and dances, children’s activities, food, and prayer. The main stage area is large enough to accommodate the 10,000-plus attendees who are expected each evening.

While there have been sizable Christian gatherings in Cambodia in the past, many have primarily been led and funded by organizations from abroad. For example, the Billy Graham Evangelistic Association held a rally in Cambodia in 2019, the organization’s first event in the Southeast Asian nation.

But this time, the driving force has been Cambodian believers themselves, including Evangelical Fellowship of Cambodia. Only three of the 18 members of the executive committee are foreigners, and about three-fourths of the $228,000 that has been raised for the celebration has come from inside the country. 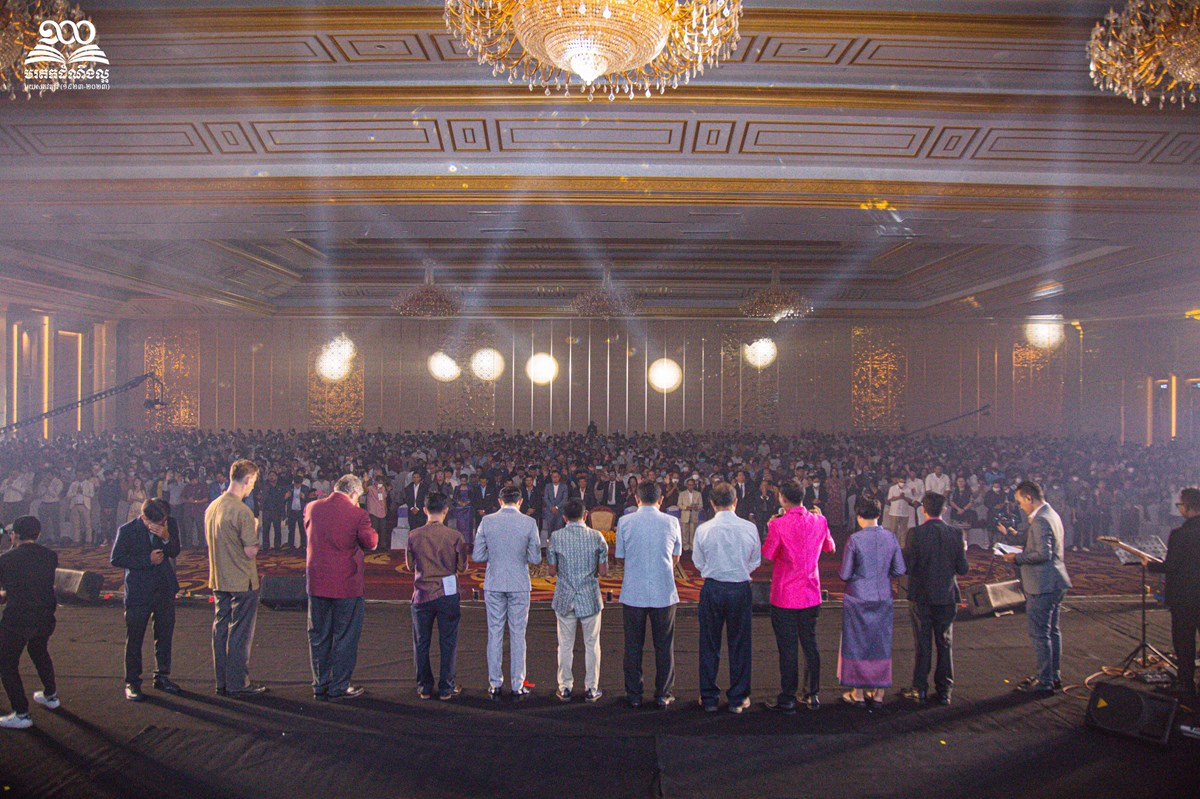 Christians gathered for a kickoff to the anniversary celebration in 2022.

Christians from all classes have given their money and time to make the celebration a reality, says Mara Kong, a pastor at New Life Fellowship in Phnom Penh who leads the executive committee. Some have contributed as little as 25 cents because that’s all they can afford, but they still want to support the effort.

“They give because they believe it’s time for the gospel to shine in this nation,” Kong said. “I’ve never seen unity in the body of Christ [in Cambodia] like this before. A lot of people have been praying for Cambodia and dreaming to see … Cambodian people have an encounter with [God]. The prayers have worked.”

There is data to support the sense of progress felt by leaders on the ground. According to the World Christian Database, Cambodia’s Christian population grew more than any country in Southeast Asia from 2000 to 2015; by 2020, almost 3 percent of its population was Christian.

Though a smaller percentage than in several nearby nations, it is a remarkable figure considering that there were nearly no Cambodian Protestants at two points in the last century.

When two American missionary couples from the Christian and Missionary Alliance (CMA) arrived in Phnom Penh in 1923 to plant churches and translate the Bible into the Khmer language, they had little foundation to build on. French colonial leadership forbade Protestant missionaries from entering the country before that.

At the time, the small Roman Catholic presence in the country, dating back to the 16th century, was largely disconnected from broader Cambodian society. Efforts by foreign Protestant Bible societies to translate the Scriptures into Khmer stalled decades earlier. Only the Gospel of Luke and Acts were completed, and the French colonial government opposed the distribution of the translation.

A hundred years ago, the CMA missionaries were able to secure permission for their work and began to see slow but meaningful progress. From these humble beginnings, the Protestant and independent Christian communities increased gradually over the next 40 years, before experiencing a surprising jolt of more rapid growth. All North American Protestant missionaries were expelled from Cambodia in 1965 amid rising anti-Western sentiment, and many feared that the nascent churches they left behind would fade away.

“As it turns out, exactly the opposite happened,” said Briana Wong, an expert on Cambodian Christianity who teaches at Phillips Theological Seminary in Tulsa. “Protestantism actually exploded between 1965 and 1970 (the year that the North American Protestants returned) and continued growing until 1975.”

That growth stopped abruptly in 1975 when the brutal Khmer Rouge regime came to power. Supposedly working to create an agrarian and egalitarian society, the Khmer Rouge terrorized Cambodians with forced relocations, violence, and murder.

His father, who survived, was almost executed when soldiers didn’t realize he had secured permission to cook his own chicken to feed his wife, who was ill. Kong lost 21 relatives to the Khmer Rouge.In the end, approximately 2 million Cambodians died during the regime, including almost all the nation’s Christians.

After the end of Khmer Rouge rule in 1979, Cambodian Christianity began to be birthed a second time. The few surviving believers started rebuilding their spiritual communities in Cambodia and the heavily populated refugee camps at the border.

“It was to a great extent Cambodian Christians themselves, many of whom had decided only recently to convert, who led Bible studies, carried out ministries of pastoral care, and preached to large crowds of their fellow refugees,” Wong said.

Navy Chann’s decision to follow Christ reflects this. After the Khmer Rouge gained power, she and her family fled on foot for four months, over mountains, through monsoons, and across fighting zones, to reach the Thai border. There they were fed by the Thai government and eventually settled in one of the United Nations’ refugee camps.

While they were living in the camp, some Cambodian friends who had recently become Christians shared the gospel with her. She accepted Christ in 1982, followed by her husband and other family members.

They moved to Canada after being granted refugee status in 1985 but returned to Cambodia 13 years later to serve with World Renew, a Christian relief and development organization. Chann and her husband still live in Cambodia, where they train and support pastors and their families.

“I’ve had a few close calls with death, but I think God has kept me alive for his purpose,” Chann said.

Today, Christians are a more visible and accepted part of Cambodian society, including in civic life. There are now Christians serving in the government, and Cambodia’s Buddhist prime minister, Hun Sen, is scheduled to attend the Gospel Centennial’s opening ceremony. All of this would have been unimaginable just a few decades ago.

The denominationally diverse body of evangelicals that have come together for the Gospel Centennial Celebration reflect the variety of churches currently ministering across Cambodia, both in the larger cities and in rural villages.

Most congregations are Protestant or independent, with prominent groups including the CMA-affiliated Khmer Evangelical Church, the Foursquare Church of Cambodia, and indigenous church-planting associations like the Living Hope in Christ Church.

David Manfred, an American missionary who has served in Cambodia with the CMA since 1995, has noticed a shift in attitudes toward Christianity across Cambodian society.

Christian leaders hope that the celebration will continue to spread that conviction and combat lingering stereotypes, such as that Cambodian believers do not respect their elders or their culture. Pisit Heng, a worship leader and songwriter who is serving as the Gospel Centennial’s production director, made sure to include performances of traditional Khmer music and dancing in the event’s program in addition to contemporary-style praise and worship songs.

“To have our culture in our performances shows people that we still care about our traditions,” said Heng, who also serves as executive director of the Bible Society in Cambodia. “We can adapt our traditions; we’re not going to get rid of them.”

Social media has also been a useful tool for showing other Cambodians what their Christian compatriots are really like. Being able to glimpse worship services and prayer groups online has helped more people have an open mind toward churches.

Younger leaders like Heng, age 43, are uniquely equipped to take advantage of these opportunities, and their elders in the Cambodian church have purposefully retreated into an advisory and mentoring role.

A strong connection between the generations exists, but the decision makers are mostly middle-aged. Older leaders like pastor Barnabas Mam rejoice that after years of hard labor, they are able to coach emerging leaders and witness the churches growing and maturing.

“I wish that my mentors could have lived to see this with their own eyes,” Pastor Mam said, his voice breaking with emotion. “It’s so sad; they were all killed by the Khmer Rouge. They dreamed to see it, but I am so blessed to live and see it happen in front of me.”

James Thompson is an international campus minister and writer from the state of Georgia.

Christians gathered for a kickoff to the anniversary celebration in 2022.
expand