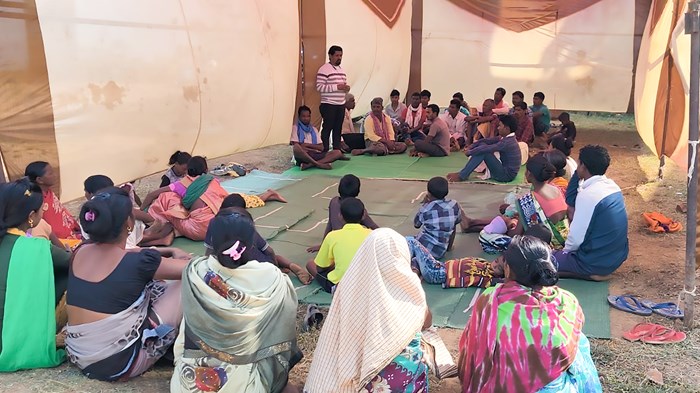 Image: Courtesy of Salim Hakku
Tribal Christians from three villages shelter in the Chhattisgarh town of Kondagaon on December 21, 2022 after they were forced to leave their villages.

On New Year’s Day, a 500-person mob assembled in the village of Gorra, a small community in the central Indian state of Chhattisgarh, and summoned the town’s Christians. After about 15 people arrived, the Hindu extremist crowd attacked.

Aytu Ram Dhruw, a local Christian in his late 20s, heard the news from an injured friend who told him they needed immediate medical attention.

“About 20 of us quickly rushed to the village to carry them to the hospital and met the mob on our way while entering the village. The mob caught us and began to assault us,” Dhruw said.

While most of the young people outran the mob, Dhruw’s father Bahadur, along with three others, were tracked down.

“They beat my father and three others with sticks, legs, fists, bricks, and stones until they all fell unconscious,” Dhruw said.

While Dhruw and his friends managed to take the victims to the hospital, Dhruw had to release his father from the hospital the same night when two of the assailants identified him in the hospital and threatened to call the mob on them again.

“We did not return to our village since that day,” Dhurw said.

The attack on Gorra’s Christians is far from an isolated incident.

Weeks of coordinated attacks on tribal Christians in the central Indian state of Chhattisgarh have left nearly 1,500 people homeless and traumatized. Right-wing Hindu residents in the Bastar division of the state have chased Christians from their homes and vandalized and demolished their houses and churches, enraged that their neighbors have refused to reject their faith. 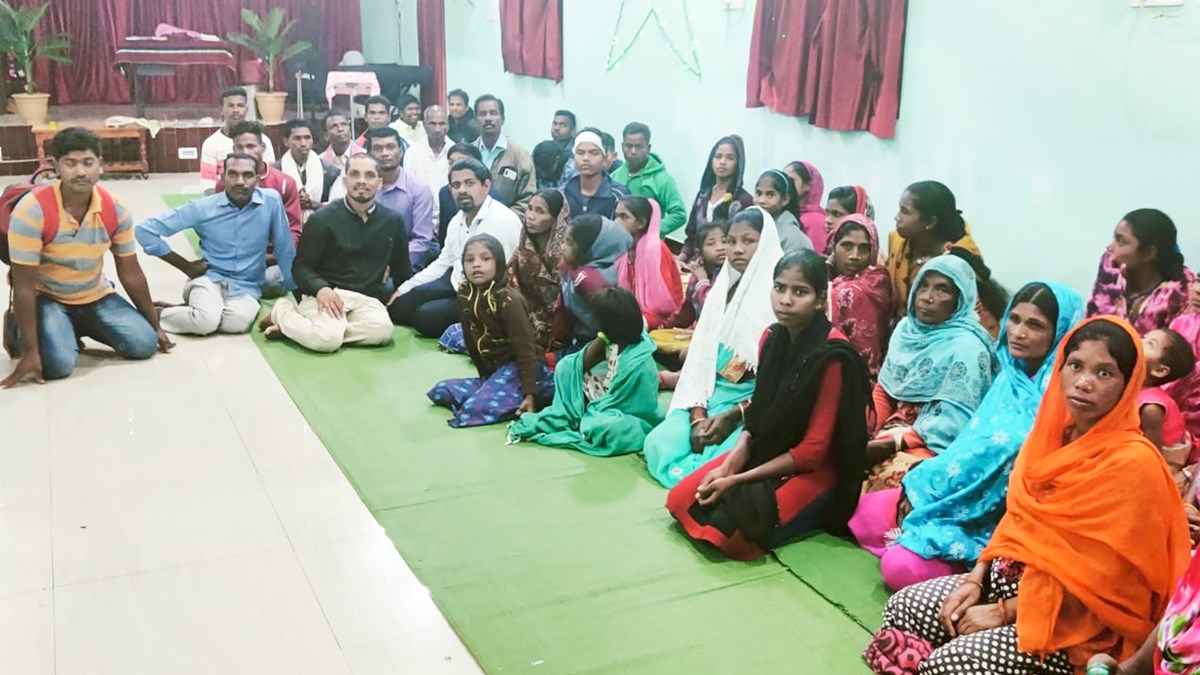 Thirty-four tribal Christians take refuge in a church in Kondagaon, Chhattisgarh on December 26, 2022.

“Accusing us of following a foreign religion, and leaving the tribal culture, they gave us a choice either to recant our faith or leave our homes and our village, never to return,” said Dhruw.

Nearly 400 incidents of violence against Christians have been documented by the Chhattisgarh Christian Forum (CCF) in the past three years. Even before the violence began to escalate in earnest starting, a 2021 report from the Religious Liberty Commission of Evangelical Fellowship of India (EFI) documented that Chhattisgarh already had the second highest number of persecution incidents of Christians after Uttar Pradesh, the country’s most populous state.

In Bastar, this aggression came to a head in November, when Hindu right-wing groups organized mahapanchayats (regional council meetings) and began ruling and passing measures designed to evict Christians from their communities. The councils banned Christians from worshiping within their own homes, prevented pastors from visiting Christian families in the village, and forbade local believers from carrying out their rituals like weddings or burying their dead in the village. They also restricted Christians from buying or selling goods and from working.

“These meetings were held in all the villages from time to time, and we [tribal Christians] were pressured to recant our faith,” said Dhruw. “We told them that we are on the ‘Correct Way,’ and we cannot leave this Way; our lives have changed. But they refused to listen, and then by November they began to assault Christians in various villages.”

In recent weeks, Christians have been called before their respective village councils and given the option of either recanting their faith or leaving the village.

“Some gave in to the pressure and renounced their Christian faith, while those who did not were assaulted and forced to leave the village immediately,” said Salim Hakku, who pastors in the Bastar district.

The timing of these expulsions has meant that those fleeing have had to contend with harsh cold weather. At times, they’ve had to beg the government for shelter, and Christian organizations have been the only parties to provide food, clothing, and basic necessities. And at the advice of the police, the Christian tribals also had to forgo Christmas and New Year’s gatherings.

“Several matters were reported to the police time and again. No action was taken by them, which has resulted in the series of attacks against the Christian community,” said CCF chairman Arun Pannalal in a press conference on January 4. “The police have not only neglected our complaints, but they have also encouraged the attackers and we have evidence of this.”

Though the anti-Christian violence is by and large projected as a reaction of non-Christian tribals against their Christian tribal neighbors, the authorities admit that the attacks seem to be orchestrated by outsiders. Locals blame prime minister Narendra Modi’s Bharatiya Janata Party (BJP) and the Rashtriya Swayamsevak Sangh (RSS), the Hindu extremist organization, for inciting the attacks. Two local BJP leaders have been arrested in connection with various incidents of violence against the Christian community.

“Although such acts are interpreted as isolated attacks, in reality they are orchestrated attempts to malign the Christian community. It is understood to be the continuation of a series of attacks against Christians in Chhattisgarh state in recent years,” said Asir Ebenezer, the general secretary of the National Council of Churches in India, in a statement. “The increase in violence against Christians all over India especially among the economically weaker sections of the society exposes the persecution meant to cleanse a particular religious community from all spaces.”

EFI hand delivered a letter to Bhupesh Baghel, the chief minister of Chhattisgarh, right before Christmas. After the meeting, Baghel tweeted that the government had taken action and that nobody was above the law.

But Christian leaders say that because the attacks continue, much more help is still desired.

“The government must demonstrate the political will to protect the state’s social fabric and intervene to end violence against Christian tribals in Bastar,” said Pannalal.

Throughout this wave of violence, Christians have reported several incidents of forcible conversions in Chhattisgarh. In December, for instance, Hindu extremists threw the Bibles of nearly two dozen Christians in the village of Madamnar down the drain and performed Hindu purification rituals on community members, one Christian leader reported.

The Hindu right describes this process of mass conversions by Hindu right-wing nationalists of Muslims, Christians, Buddhists, or other faiths to Hinduism as “homecoming,” or ghar wapsi in Hindi. Hindutva (right-wing Hindu political ideology) maintains that Indians or their ancestors were all originally Hindus, hence, coming back to the fold of Hinduism is not conversion but a “homecoming” or returning back to their ancestral faith.

The community known as the Tribals or Adivasi [literally, first inhabitants] are not Hindu. But over the years, right-wing nationalists have been strategically infiltrating the tribal communities with two broad goals. First, they are attempting to Hinduize the tribals through a syncretic approach to tribal religious practices and convincing them that they are Hindus to begin with. Second, they are seeking to work against Christian tribals and Christian missions in tribal communities by provoking non-Christian tribals against them.

Right-wing Hindu nationalists have told tribals that if they wish to save their tribal culture from Christian and foreign influence, they must not allow Chrisitanity in their communities and must convert Christian converts to Hinduism.

Last week,Kalepal villagers disrupted the funeral ceremony of a tribal Christian woman and refused to let the family perform her last rites until they recanted their Christian faith and performed the rituals according to Hindu traditions. Despite the support of the entire tribal Christian community, the family recanted.

Their Hindu neighbors subsequently performed purification rituals on the family and the dead woman’s corpse and were proceeding with its cremation. (Hindus traditionally cremate their dead.)

“They initially target the Christian family who has large extended or joint non-Christian family members. Then they begin to exert organized pressure from all the family members on one side and local villagers from the other,” he said. “If the Christian family still does not give in, they use techniques like physical assault, ostracization, infringe their property, house or land and if that too does not work; they use opportunities like death of a loved one to leave the family with no option but to give in.”