“Nicaea-sized” questions discussed at conference of 400 theologians from 44 countries include the “heresy” of ethno-phyletism.
Meagan Saliashvili - Religion News Service|January 17, 2023 09:44 AM 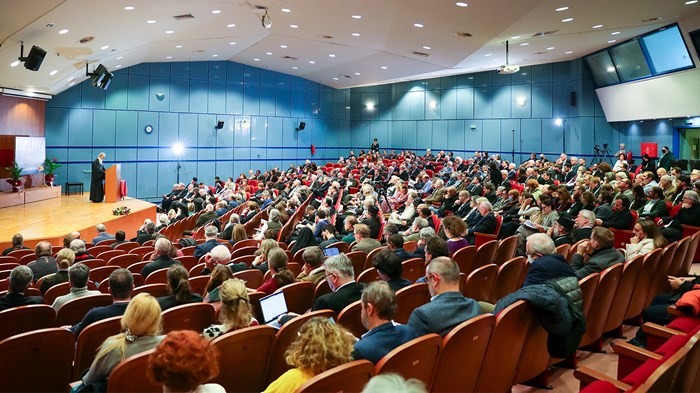 Nearly 400 Orthodox Christian theologians from 44 countries convened in the largest international conference of its kind in Greece on Thursday (Jan. 12) to discuss “Nicaea-sized” questions facing the Eastern Orthodox Church amid war and bitter division.

Some of the most contentious issues at the Mega-Conference of the International Orthodox Theological Association, meeting in Volos, have been exposed by Russia’s invasion of Ukraine in February, which exacerbated a split between a newly independent Orthodox Church of Ukraine in Kyiv and the Russian Orthodox Church based in Moscow.

The conference’s keynote speaker, Metropolitan Ambrosios (Zografos) of Korea and Exarch of Japan, a bishop of the Ecumenical Patriarch of Constantinople, told the assembly Wednesday evening that the various branches of Orthodox Christianity had fomented a heresy by taking sides in the war, calling it “an unspeakable travesty” that as a result, “most Orthodox leaders have failed to condemn this diabolical war unequivocally.

“We cannot even say, ‘Well this is a war driven by politicians. Our churches are against it,’” Ambrosios said, “because so few of our church leaders have actually taken a public anti-war stance.”

At the root of the Russia-Ukraine split is a theological heresy called ethno-phyletism that conflates church and nation, Ambrosios argued. The practice of applying church governance based on ethnicity, nationality, or culture rather than geography, the metropolitan said, is “nothing less than the greatest danger to the Orthodox unity of the church.”

The effects of ethno-phyletism often lead to church members excluding Christians who don’t match their particular ethnic identity, however subtly, or to elevating nationality over faith.

The debate over the ideology has led to finger-pointing: Critics of the Moscow Patriarchate point out the Russian church has expanded into jurisdictions, such as Africa, where it had no canonical authority. Critics of the Patriarchate of Constantinople point out, on the other hand, that in 1922 the Greek Patriarch established Greek Orthodox Churches in the US, rivaling the Russian church’s presence. Russian-led organization of the Orthodox churches in the US shifted after the Russian Revolution and amid waves of immigrants from Eastern Europe who requested priests from abroad to serve them. 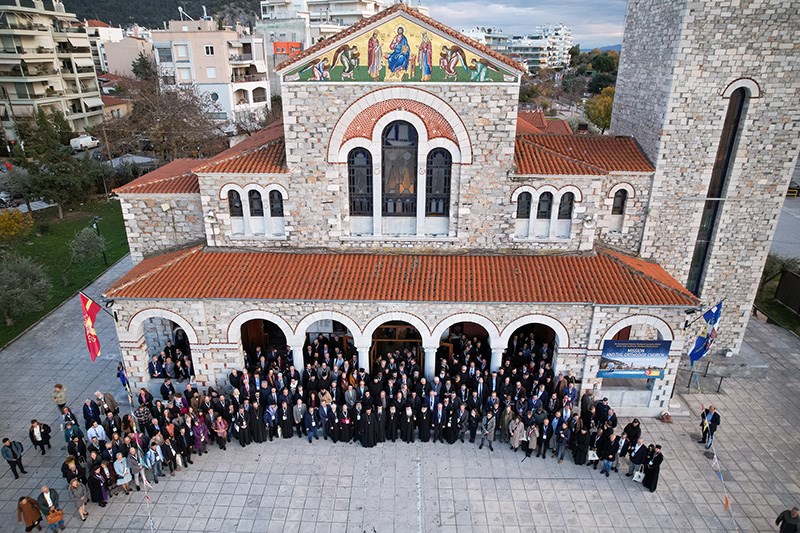 Attendees of the Mega-Conference of the International Orthodox Theological Association meeting pose together in Volos, Greece.

Some argue completely eliminating ethno-phyletism would mean consolidating the independent Orthodox churches in the US, such as the Greek, Serbian, Antiochian, Russian, and others that currently overlap their jurisdictions, into one Orthodox Church for the region.

Ambrosios’ diagnosis broadly echoes a contingent of Orthodox scholars and clergy who oppose Russia’s invasion of Ukraine that includes the event’s sponsors, the International Orthodox Theological Association (IOTA), the Orthodox Theological Studies Association, and the Volos Academy for Theological Studies. The scholars represent some 28 areas of study, including women in the church, asceticism, science and theology, political theology and more, all under a theme of mission and the Orthodox Church. Members of the Moscow Patriarchate attended, too.

“The Mega-Conference … has become a most, if not the most, significant gathering of Orthodox Christian scholars from throughout the world,” said Anton Vrame, a member of the IOTA board and a professor of religious education at Holy Cross Greek Orthodox School of Theology in Brookline, Massachusetts. “The spirit of the conference is joyous, with a strong sense of unity among the diverse membership.”

IOTA held its first conference in Romania in 2019. Fostering collaboration among Orthodox, Catholic, and Protestant scholars, the conference aims to help church leaders continue Orthodox traditions in modern contexts, said IOTA President Paul L. Gavrilyuk. He listed religious fundamentalism, climate change, the pandemic, economic uncertainties, and the war in Ukraine as pressures on the church to respond to world affairs, “for the sake of serving Christ and the church.”

Pantelis Kalaitzidis, director of Volos Academy, told the audience that the mission of the church cannot be only a theoretical or historical concern but must also be a contemporary one, since “God’s revelation takes place in history.”

Many see the Russian church’s support for the war in Ukraine as an unfortunate outcome of ethno-phyletism, expressed as a “Russian World” ideology. Russian President Vladimir Putin and Patriarch Kirill of the Moscow Patriarchate have often invoked this ideology, which says that a transnational Russian sphere of influence called Holy Russia has a common political center, spiritual center, language, church, and patriarch that co-labor with the national leader to govern and uphold morality and culture.

But the effects of Orthodox fragmentation can be seen not only in Ukraine but also in every Orthodox jurisdiction, some conference participants say, from Western Europe and the US to Africa and East Asia. On Thursday, Gavrilyuk led a prayer for victims of war in Syria, Afghanistan, and Ethiopia, where fragile peace has recently ended a civil war along ethnic lines with Oriental Orthodox Christians on each side. He said the Orthodox Church must be more than “an ethnic club.”

Of particular concern to critics of the members is the establishment of Russian churches in regions where other branches of Orthodox Christianity already have a foothold, such as Ambrosios’ jurisdiction in Korea, where a canonical order states that only one bishop should serve all languages and ethnicities.

The Moscow Patriarchate has also been rapidly expanding across Africa, stepping on the Patriarchate of Alexandria, which, since the Council of Nicaea in 325 A.D., has operated on a decree of territorial sovereignty over North Africa. The Russian church declared Alexandria to be in schism after its patriarch recognized the independence of the Orthodox Church of Ukraine, granted by the Ecumenical Patriarch Bartholomew I in 2019.

“The promising revival of Orthodoxy in the 20th century is being endangered by the serious problems that arose after the fall of communist regimes in so-called Orthodox countries which have sought to expand into other ecclesiastical jurisdictions,” Ambrosios said in his address.

In 2016, the Council of Crete condemned not just ethnic particularism but also a kind of nationalism that further restricts belonging and mutual acceptance. But such pronouncements have had little effect in the past: The Eastern Orthodox Church condemned ethno-phyletism as heresy at the 1872 Council of Constantinople, but only Greek-speaking church leaders were present, and the move was ignored in practice.

Still, Gavrilyuk is hopeful that the conference can lead to real reforms in the Orthodox Church. With the attendance in Volos of Russian Orthodox members and the sheer size of the meeting, he said, with the characteristic reserve of a churchman, “such a hope is not unsubstantiated.”

Attendees of the Mega-Conference of the International Orthodox Theological Association meeting pose together in Volos, Greece.
expand