For Norwegians So Loved the Bible, a New Translation Made Many Mad 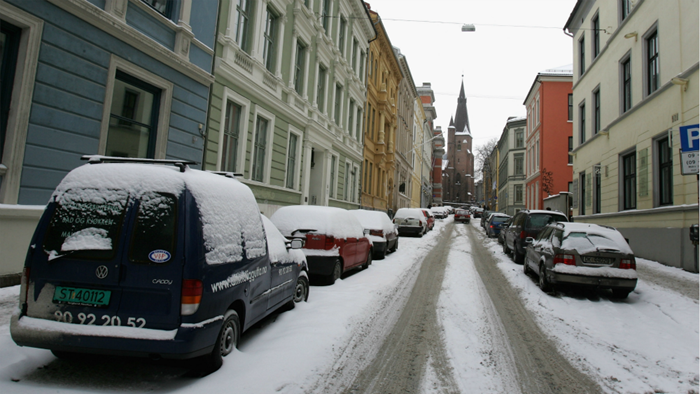 In a country where only 2 percent of the population regularly attend church, one doesn’t expect to find a national debate about the correct translation of John 3:16. And yet, across Norway, news that a forthcoming Bible translation will replace gå fortapt (get lost) with gå til grunne (perish) has roused strong feelings.

“Why change something that is completely understandable?” said one woman in Alta, a town on a fjord on the northern coast.

“Such judgment day and sulphur speeches do not belong in a modern, inclusive church—at least not during funerals,” said an Oslo woman on Facebook. “It adds stones to the burden for relatives.”

But the editors of the forthcoming Bible—commissioned by the Norwegian Bible Society and scheduled for publication in 2024—say they are not surprised. Receiving criticism is part of the process.

“It’s always a controversial thing to translate the Bible,” said Jorunn Økland, a biblical and gender studies scholar on the editorial team. “Whatever you do, it’s going to be controversial.”

The Bible was first translated into Norwegian in the 13th century, when it was published in parallel editions with the then-more-dominant Danish. The first full translation was not released until 1858. And yet, just as with English and German Bibles, the words of Scripture became part of the poetry of the language, a storehouse of images, widely seen as a cultural inheritance. Even those who identify as secular can feel protective of the words of the Bible.

“It still provides many of the symbols and metaphors that create meaning,” said Jenna Coughlin, a professor of Norwegian at St. Olaf College in Minnesota. “When new translations are published, the changes can feel disorienting … even if the theological dimensions aren’t so important.”

According to Coughlin, the Bible is, in some ways, “a public book” in Norway. Christianity, after all, is enshrined in the constitution. An amendment separated church and state in 2012, but the governing document stipulates that Christianity, along with humanism, is the foundation upon which the country is built.

And membership in the Church of Norway remains high. Roughly three out of four people are on the membership rolls, even though the majority are atheist or agnostic. The Bible remains an important “cultural touchstone,” Coughlin said.

Many Norwegians also really like the translation the Bible Society published in 2011. For that edition, biblical scholars and language experts teamed up with renowned authors, who are considered the finest “stylists of modern Norwegian,” including Karl Ove Knausgård, Hanne Ørstavik, and Jon Fosse. The translation became a bestseller the year after publication.

“Its stroke of genius was how it underscored that in a time of increasing secularization, the Bible isn’t out of touch with society,” Økland said. “People may not go to church, but they still consider the Bible their own.”

Despite its popularity, the translation also received criticism, especially from church leaders and scholars. In the past 10 years, editors have collected more than 800 critical comments to consider in a revision.

In 2021, the Norwegian Bible Society tasked a committee to start working on an updated edition. As they started to lay the groundwork for revisions, the editors calculated they would need six or seven years. The Bible Society said they had one.

One way to deal with the compressed timeline, according to Økland, was to forgo a formal consultation process. Instead, the editors published drafts of their work in the fall of 2022 and waited for people to react.

“We invite the reactions as part of the democratic process. It’s a wonderful thing about how we work in Norway,” Økland said.

They got the feedback they were looking for. Responses were swift and vociferous. While some of the readers of Norway’s two Christian newspapers—Dagen and Vårt Land—praised the revisions, many objected to specific choices in very strong terms.

Lutheran Church of Norway bishop Halvor Nordhaug, for example, said he did not like the new edition’s use of the word slave, as in Romans 1:1, which reads, “Paul, a slave of Christ.” That would be hard, he said, to read aloud in a church setting. The majority of Norwegians would recoil from the casual analogy between faith and the horrors of slavery.

Theologian Glenn Øystein Wehus, professor of New Testament at the MF Norwegian School of Theology, Religion and Society in Oslo, wrote about the translation of John 3:13 in Vårt Land. The get lost wording, he wrote, is clearer and more theologically appropriate. Perish on the other hand, “can lead the mind for many in a completely different direction, namely annihilation (that is, an extinction after death).”

Others objected to the gender-neutral address in some of the epistles, with “brothers and sisters” replacing “brothers.” There was also controversy over the word kjøtt (flesh) replacing menneske (human) in John 1:14.

Perhaps more seriously, some raised questions about the translation process, its transparency, and whether the editors and the Bible Society should have the authority that they claimed for themselves.

Torkild Masvie, bishop of the Lutheran Church in Norway, said the revisions would not be suitable for his small, confessional denomination. The traditionalist Lutherans currently use the 2011 Bible and a conservative 1988 translation known as the Norsk Bibel.

“The Bible Society does important work,” he said, “but if the end result is something that is not helpful for the congregations, then we have a problem.”

Masvie said church leaders should have been involved in the revision. He accused the Bible Society of keeping Norwegians in the dark.

“We should not give our allegiance to the Bible Society when it comes to our liturgy,” Masvie said. “We let them by default decide the language of our liturgy through the translations.”

Masvie’s relatively marginal voice is joined in this critique by some prominent religious leaders. Under the leadership of bishop Erik Varden, the Roman Catholic Church in Norway has grown from 95,000 people to more than 160,000 in just a few years. Vanden has also expressed frustration that neither he nor other Catholic leaders were consulted by the Bible Society.

“You have to listen to those who will use the Bible,” he said. “You can’t just go to the professional circles.”

Øyvind Haraldseid, general secretary of the Bible Society, said in a statement that the editors are listening and all the criticism is being taken into consideration. They will keep flesh in John 1:14, but are still discussing whether or not to use slave instead of servant and have decided to go back to the 2011 translation of John 3:16. The revision will retain the familiar language, that those who believe in God’s only Son will not “get lost.”

Haraldseid also conceded the Bible Society was not as transparent as it could have been in the process, and should have sought out input from more interested parties.

“We will … continue to provide information about the audit through various channels in the future,” he said. “Bible translation is often a struggle with the text to find the right words that communicate the content of the text in our time.”

For Norwegians So Loved the Bible, a New Translation Made Many Mad

For Norwegians So Loved the Bible, a New ...