As Putin professes a ceasefire over the Orthodox holiday and a famous Kyiv monastery cathedral changes hands, evangelical seminarians relate the toll of ten months of war.
Jayson Casper|January 7, 2023 03:45 PM 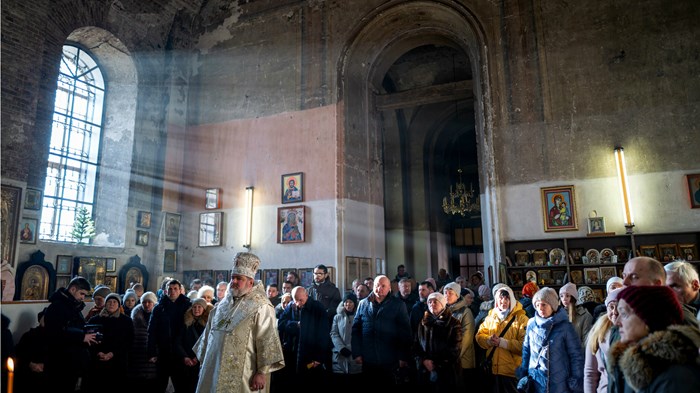 In advance of Putin’s unilateral declaration of a 36-hour truce over Orthodox Christmas today, Ukrainian seminary leaders shared their reflections on the impact of ten months of unabated conflict.

“War is exhausting—but this exhaustion does not happen overnight,” wrote Roman Soloviy, director of the Eastern European Institute of Theology. “Nevertheless, our mission continues.”

Reviewing his own emotional response since Russia invaded Ukraine on February 24, Soloviy cited the impossible choices forced upon his nation: Save your family or your neighbors? Flee the country or stay and help?

He could not read, listen to music, or watch movies for many months.

The stress only surged as reports proliferated about atrocities, complicated by the frustration that Ukrainian churches could not help everyone. Decisions needed to be made in darkness, while seeking to balance one’s own psychological health.

For his December entry, Siniy wrote: “Christmas is the coming of God into a mean world to mean people. We pray that the Lord will show us how and where to serve.”

Oleksandr Geychenko, meanwhile, chose a different theme for the holiday. Yet it fit perfectly with Siniy’s October observations.

“This year’s Christmas for me is closely associated with the metaphor of light,” wrote the president of Odessa Theological Seminary. “Perhaps, this is my reaction to the uncertain power supply.”

Patriarch Kirill of the Russian Orthodox Church (ROC) first suggested the holiday truce, while 1,000 US-based faith leaders called for Ukraine to honor it. Nonetheless there has been exchange of shelling along the front lines, and many Ukrainians dismissed Putin’s initiative as a cynical ploy to buy time for his retreating troops. (Foreign analysts instead saw a PR bid for Russian Christian backing.)

Geychenko had taken his electricity for granted. Now, he sees a spiritual connection.

“The light that comes from Jesus not only shines into human darkness,” he wrote, “it also illuminates our hearts and faces, making us the bearers of light in the deep and darkest abyss of human suffering and tragedy.”

Their statements were released by Voices from the Ukrainian Ruins, representing a collaborative network of 17 evangelical institutions. Leaders stated that in the past year their 200 volunteers provided long-term accommodation for over 4,000 internally displaced people, evacuated over 10,000 others, ministered to over 40,000 in transit, and distributed food to over 300,000.

Helga Dyatlik expressed her appreciation for support from the global body of Christ.

Meanwhile, Ukraine as a nation sought God through the scriptures. According to YouVersion, Bible engagement rose by 55 percent since the beginning of the war. And queries by refugees spiked Ukrainian-language searches in Europe by 76 percent.

Their chief Bible verse of refuge was Isaiah 41:10: So do not fear, for I am with you; do not be dismayed, for I am your God. I will strengthen you and help you; I will uphold you with my righteous right hand.

The word fear was among the top search terms on the popular Bible app in 2022. Eventually, it was replaced by love.

Remarkably, in their journey of reflection, not one contributor among the Ukrainian theological educators spoke of being afraid. On the contrary, their reliance on God’s strength helped uphold others.

“Working in a complex region torn by politics and warfare and trying hard to be faithful to the Mission of God, you become a bridge person,” wrote Taras Dyatlik, regional director for Overseas Council and Helga’s brother. “These are the bridges of trust, care, understanding, and love, despite the heavy traffic.”

Nonetheless, the weight is heavy.

“People-bridges are usually very vulnerable,” he continued, mixing metaphors in reference to a play by Spanish poet Alejandro Casona that he once witnessed in Donetsk. “They are the trees that die while standing.”

The work of supporting others and connecting worlds arouses jealousy, suffers criticism, and often carries on in neglected anonymity. A bridge is easily destroyed, he noted, while a tree—though outwardly strong—cannot share its burden.

“It is not about being burned out,” Dyatlik wrote, before turning to a different passage from Isaiah. “But Christ will not break a broken reed.”

Rightly or wrongly, one bridge—one tree of former strength—is being broken.

Amid accusations of collaboration with Russia, the Ukrainian Orthodox Church (UOC) lost possession of the main cathedral in the historic 1,000-year-old Kyiv-Pechersk Lavra, known as the Monastery of the Caves. Though the UOC has denounced the war and stopped honoring ROC leadership in its liturgy, the church remains in canonical affiliation with the Moscow Patriarchate.

Its lease of the Lavra complex expired on December 31. The breakaway and rival Orthodox Church of Ukraine (OCU), granted autocephaly (independence) by Ecumenical Patriarch Bartholomew I of Constantinople two years ago on Orthodox Christmas Eve, was granted authority by Ukraine’s ministry of culture to conduct Christmas services at the Dormition Cathedral.

The decision appears to be popular.

According to a recent survey, 78 percent of Ukrainians at least somewhat favor President Volodymyr Zelensky’s decision to impose sanctions on the UOC, with 54 percent agreeing the church should be banned entirely. Only 12 percent said that only individual cases of collaboration should be investigated.

Yet other studies have found that the UOC remains larger than the OCU in terms of monks, priests, and parishes, while its members are more faithful in attending service and church activity.

A UOC statement revealed that seven of its clergy have been killed in the war, 75 churches have been destroyed, and a further 300 have been damaged by shelling. Another statement tallied the UOC’s contribution of 180 tons of aid given to the Ukrainian armed forces, 3,500 tons given to the victims of military operations, and over 50,000 people who received church assistance in housing and evacuation.

Meanwhile, an anonymous group of Russian Christians is seeking to be a bridge in the other direction. Issuing a “Christmas Declaration of Russian Peacemakers,” they claim to represent leaders and laypeople in the Orthodox, Protestant, and Catholic denominations, though Russian sources queried by CT did not know of the statement or its authors.

“Taking into consideration all the risks involved,” read the statement, addressing Russian Christians, “we urge you to condemn this evil and call for the immediate withdrawal of Russia’s troops from Ukraine and for the end to this war.”

For the first time in late December, Putin invoked the term war in reference to the conflict. He had previously called it a “special military operation” instead, and in March the Russian parliament imposed fines and prison terms for using alternate language.

“We know how it hurts when Russian missiles hit your campus, your apartment is destroyed or looted, or when you must lead a funeral for your graduates,” wrote Ivan Rusyn, president of Ukrainian Evangelical Theological Seminary. “Russian rockets fly over our heads during this Christmas season, but we have no fear because we know [God] is with us.”

Located in Bucha, a suburb of Kyiv, Rusyn witnessed the worst of these atrocities. Russian soldiers looted homes and executed civilians, piling them in mass graves. Once liberated, the seminary continued its role of helping and healing its community.

His message reflected lessons learned from the miracle of Christmas.

“Mission is only possible with the incarnation, with honest and involved presence with people,” wrote Rusyn. “Compassion for us is to suffer together, having the same tears and scars our society has.”

And amid a war that many Ukrainians interpret as Russia’s effort to cancel their whole nation, strength ultimately comes from the incarnation of Jesus. So surmise the seminary voices “from the ruins.”