An interview with James David Ford, chaplain of the United States House of Representatives

The political situation was tense when the Continental Congress met for the first time on September 5, 1774. It was moved that the Congress should be opened with prayer. Following debate, the motion carried, and two days later, Jacob Duche, an Episcopal clergyman in Philadelphia, read Psalm 85 and prayed. John Adams wrote later that to see George Washington and others kneeling and praying for Boston, whose port had been closed by British troops, "was enough to melt a heart of stone."

Today, the tradition of prayer at the opening of Congress is carried on by James David Ford. Ford became chaplain of the U.S. House of Representatives in 1979 and has been re-elected every two years since. He also counsels and calls on members of Congress.

Preparing him for that role, Ford served as pastor of a country church in Minnesota and as chaplain, for eighteen years, at the U.S. Military Academy at West Point. He was the youngest person and the first Lutheran to hold that post. 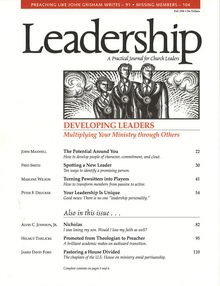 This article is from the Fall  1996 print issue of Leadership Journal. Subscribe to continue reading.