Number of places in the United States named after something in the Bible: 61,742

Books about the O. J. Simpson case already in print, forthcoming, or under contract: 50

Pollster Louis Harris has written, "The idea that half of American marriages are doomed is one of the most specious pieces of statistical nonsense ever perpetuated in modern times."

It all began when the Census Bureau noted that during one year, there were 2.4 million marriages and 1.2 million divorces. Someone did the math without calculating the 54 million marriages already in existence, and presto, a ridiculous but quotable statistic was born.

Harris concludes, "Only one out of eight marriages will end in divorce. In any single year, only about 2 percent of existing marriages will break up."

Pastors Defy the IRS
They've endorsed presidential candidates from the pulpit. Will the IRS respond?
Trending 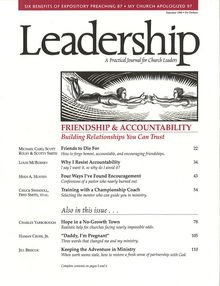 This article is from the Summer  1996 print issue of Leadership Journal. Subscribe to continue reading.