A neighboring pastor's ministry imploded. It was a slow, inward collapse over a five-year period, with the blast at the end rather than the beginning. Jim was a gifted communicator, a man of vision brimming with potential. But he was slowly seduced by his power. His giftedness to lead was overtaken by a drive to control. There were warning signs that could have alerted him to his peril, but neither Jim nor his church recognized them.

Jim came to Englewood Community Church* with an impressive resume. He trained under one of the world's premier pastors. The church that had plateaued began to grow again under Jim's leadership. They revamped some structures, added a contemporary worship service, and expanded the annual holiday music programs for which the church was known.

The energetic pastor's tell-it-like-it-is preaching style was appreciated by the church's stalwarts and newcomers alike. Jim headed and completed a building campaign in his first three years. When Jim ran a meeting (which ... 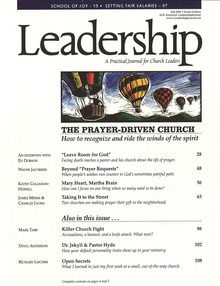