The night I learned what really matters.

I watched a man die last night. Hospice Room 436 lay unusually quiet—except for labored breathing, a sound like a man running a long final lap. His blue hospital gown rose and fell on the heaving chest.

The black magic marker tag above the bed read: "Gillis, Algerd." Al was the father of Michael, my friend. When my dad died eight years ago, Michael stood by me. When the sympathy cards had stopped coming and I began the terrifying freefall into grief, Michael had been my parachute. Now I could stand with him in vigil at his father's deathbed.

I tried to look into Al's eyes, which had always been playful. He had reminded me of Pinocchio's Gepetto. Under his silver eyebrows, dark now circled the eyes; his lids were slightly open, but the eyes were rolled back and showed only white. Clear plastic tubing snaked from the wall to a mask covering his nose and mouth. The nurses said he might make it through the night; they weren't sure. His ...

Leadership
Waiting for the Bombs
How a young pastor braced his people in the fear-filled days before London's Blitz.
Chris Armstrong
Trending 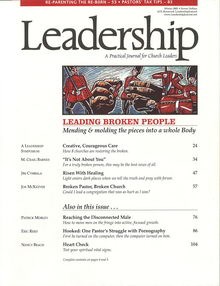