What does leadership look like in the emergent generation?
Angie Ward

Steve is the thirty-something founding pastor of a midtown church. During his six-year tenure, his church has grown spiritually, numerically, and financially. He is articulate, well-liked, and well-respected, not only in his congregation but also in his community. He has trained other pastors, served in several denominational roles, and been published in several forums, including a blog that is read by several hundred of his peers around the country.

Yet Steve hesitates to call himself a leader.

Why? To Steve, a "leader" is a lone ranger, an outspoken general who calls the shots from an insular position at the top of an organizational hierarchy. Instead, Steve would prefer to call himself an "influencer." As such, he is an integral member of a network of relationships, and he considers those relationships infinitely more important than successfully achieving any particular organizational post or three-year plan.

But not everyone shares Steve's definition. A generation ahead in ministry, a ...

Join the conversation on Facebook
Tags:
Church LeadershipGeneration X
From Issue:Spring 2006: Got Your Leadership Bearing?March 14, 2006

Discipleship |Outreach
Turning Commitees Into Community
Even the let's-get-down-to-business types will be more effective when they see the hidden human element.
Roberta Hestenes
Trending 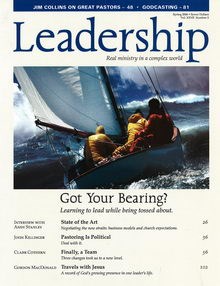 This article is from the Spring  2006 print issue of Leadership Journal. Subscribe to continue reading.