Online church is close enough to the real thing to be dangerous.
Bob Hyatt

In the early 1950s when Robert Schuller and others across the nation combined a growing car culture with "Church," they believed they were reaching a segment of the population traditional church wouldn't or couldn't. "Drive-In Church" allowed parishioners to hear a sermon, sing some songs, even receive communion and give—all without the fuss and muss of face-to-face interaction. Except for a through-the-window handshake from the pastor as they rolled away.

And while they may have been able to point to a number of folks who "attended" that otherwise might not have, the question of what was being formed in these car congregations through limited interaction, a completely passive experience, and a consumer-oriented "Come as you want/Have it your way" message, meant that (thankfully) after a brief period of vogue, "Drive-In Church" has remained a niche curiosity.

The problem with the drive-in church model isn't that it isn't church—it's that it is just "church" enough to be dangerous. What ...

Join the conversation on Facebook
Tags:
Fellowship and CommunityMediaTechnology
Posted:August 26, 2009

Discipleship |Outreach
Community for the Comfortable
Some growth comes only through suffering.
Dave Goetz
Trending 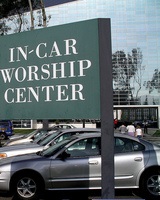