The debate over profanity in the pulpit. Is Mark Driscoll being relevant or reckless?

For a couple of years now, long-time pastor and theologian John MacArthur has been critical of Mark Driscoll's use of crude language in the pulpit. In the end, MacArthur believes Driscoll has crossed a line, and it's time for him to step down from ministry. MacArthur's comments have ignited a heated debate in the blogosphere (as you might suspect).

At the 2009 Basics Conference last month, another long-time pastor and theologian, John Piper, fielded a question about this debate. Piper, who along with Driscoll, is a card carrying Calvinista, offered a measured and thoughtful response. While strongly disagreeing with Driscoll's language and dismissing the necessity of swearing to be relevant, he does not believe the Mars Hill pastor needs to resign. You can listen to Piper's response here.

In related news, Ed Young posted a video on his blog yesterday about pastors using profanity.

In the video Young says:

We must be very, very careful not to offend anyone with bad language. The Gospel is ...

Preaching
Your Preaching Is Unique
Preaching is not what we do; it's what we are.
Warren W. Wiersbe
Trending 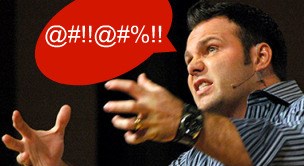