For Richard Yasinski the depression began soon after he turned 40.

The Springfield, Missouri, coffeehouse church he had planted four years earlier didn't seem to be growing beyond the few dozen tattooed and pierced teenagers who had been around since the beginning. Yasinski began comparing himself with other pastors his age that he viewed as more successful, which made him feel like a failure.

In addition to his career woes, Yasinski had medical issues. A diagnosis of ulcerative colitis resulted in surgery to remove his colon. His doctor had prescribed a narcotic to ease the pain, but Yasinski didn't give any thought to the label warning that the drug shouldn't be taken by those susceptible to alcohol addiction. Sure, his parents had been alcoholics, and he had been a heavy drinker in high school. But upon accepting Jesus at 18, Yasinski experienced deliverance from his vices, and he had sensed a call to ministry. He had successfully avoided alcohol.

But now the pain medication—along ...

Discipleship |Preaching
How the Pastor's Task Has Expanded
From shepherd to manager and missionary
Leadership Journal editor, Marshall Shelley
Trending 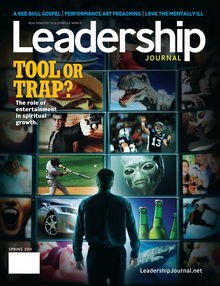