While we celebrate the life and work of Martin Luther King Jr., the church in the U.S. remains horribly divided.
D. L. Mayfield 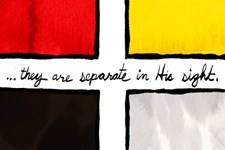 A couple of years ago, I took a road trip across the country with my best friend. We took our sweet time, rolled the windows down, and let our hair whip into tangles. We wandered off the beaten path a few times: the largest Catholic church in Kansas, the Precious Moments museum in Missouri. When we were in Memphis, we just happened to remember that this was the place where Dr. Martin Luther King Jr. was shot. On a whim, we stopped by the memorial, complete with a tour of the museum erected at the hotel where the tragedy happened.

The sun beat down on us as we looked at the balcony where he once stood and saw the wreath hanging on the door of the infamous hotel room. We stayed for a moment or two, the sweat running down our backs as we thought our uncomfortable thoughts. And then we prepared to go on our way, off to the next adventure on our road trip.

But we were stopped by a large crowd gathering in the parking lot, everyone milling about and dressed in matching white clothes. Was this some sort of family reunion, or a tour group with a dress code? We watched as the crowd assembled in front of the place where MLK was taken from us, and we watched as everyone grew silent and still. Even the little children were sober-faced, heartbreakingly spotless in their white sweater vests and dresses.

The solemnity of the moment became very clear at once. While we were sight-seers in the land of oppression, for many this place was something akin to a pilgrimage. We watched as people paid their respects, tears in their eyes. And as we drove off, my friend and I suddenly felt like the outsiders we were. We tried to push away the uneasiness we felt, the words we couldn't then begin to articulate. We had just wanted to pay our respects, to see a historical site. But instead we had witnessed collective grieving, had gotten a glimpse into what Dr. King had lived and died for. Even now, looking back, I have to wonder: were the pilgrims that day crying over his death? Or were they crying for our country, and how few of MLK's dreams had come true?

I have the distinct pleasure of living in the most diverse neighborhood in America, tucked into the forgotten urban center of our nation's heartland. The exact city isn't important—urban areas as a whole are growing larger and more diverse every year. My neighborhood is an amazing mix of cultures, languages, and customs. Everywhere I go, I am surrounded by the glorious chaos that is a global world—everywhere, that is, except the church.

MLK loved to quip that 11 o'clock on a Sunday morning was the most segregated hour in America. Since he spoke those words, since he inspired us with his prophetic dreams and visions for a reconciled world, not too much has changed for churches. Estimates put the number of multi-ethnic churches hovering around the 7% margin. In our increasingly diverse world, this just doesn't make sense.

I grew up a pastor's kid, lived my life in the pews and at potlucks, coloring pictures of a snow-white Jesus with a blue sash running down his shoulder, perfectly matching his eyes. Either rural or suburban, the churches I grew up in were all uniform in ethnicity, and this did not trouble us for even a moment. It was just the way things were, a matter of preference. The older I got, the more this line of thinking settled into my soul. Like surrounds like; nothing wrong with that.

Now, I live in the city. My husband and I have been on a hunt, looking to find a church in our neighborhood that was representative of the people who live here. Without fail, churches tend to be homogeneous in multiple ways. This, after all, is what grows a church—years of studying growth principles prove that when you target a specific demographic (by say, having a great children's program or killer fair-trade coffee in the foyer) those people will come. Capitalizing on people's preferences to hang out with others just like them has become big business in the church, and has altered the ways we worship. But even among those yearning for another way, the road is still rocky. My husband and I have showed up to multiple churches that claim to be "multi-ethnic," "urban," or "diverse" only to be disappointed by the crowd of people just like us. Diversity, be it racial or ethnic or cultural or denominational, is neither the reality nor the priority for the American churchgoer. When did this become acceptable?

Scripture speaks a different story, one where we are called to lay down our lives for our neighbors. For our increasingly urban world, the verses speaking about the lack of distinction regarding class or ethnicity or gender find new meaning. We read about Jesus, who in relating to both Jews and Greeks said that "He himself is our peace, who has made the two one and has destroyed the barrier, the dividing wall of hostility." (Eph. 2:14) The problem is, we don't live in MLK's time anymore. The majority of us don't believe we live in times of outright hostility, of oppression, of racism. We'd like to forget the sins of the past and get on with the present (for example, see The Naked Racism of Obama America). But unfortunately for us, the present is just as segregated as the past was. At least, it is inside the walls of church.

Mere preference does not even begin to explain the story. I recently heard a sermon by Jin Kim in which he detailed the history of our lack of diversity in the American church. His words were hard to hear for a girl who would desperately like to believe that we are all doing a good job.

But his words in regards to our acceptance of churches based on racial preferences are sharp and true: "Black people did not invent the black church—white people did." Kim went on to point out that America was the first country to introduce the concept of chattel slavery—condeming someone to slavery for life based solely on the color of your skin, with no chance of working your way out of it. Our forefathers quickly realized that they would retain their control better if they could carefully "Christianize" their slaves in regards to what the Bible has to say about obedience to masters (but they had to prohibit them from learning to read, lest they see all the parts about freedom, liberation, and equality). In effect, Christianity was used as a tool to promote slavery, to continue to oppress people.

It has been well-documented that African-Americans were not welcome in white churches, even up to the latter half of this century. Slower than government policies, the church held tight to racist ideologies that prevented them from breaking bread with fellow believers from different backgrounds. Even in the north, black parishioners were first asked to move to the back of the sanctuary, then the balcony, and then finally, out the door.

This is not some distant history; this happened in this century, on our soil.

Yet today we shrug off the racial divisions in our church as a mere product of musical taste, a style of dressing, a predilection for a certain pastor. When truly, our divisions are based in the sin of exclusion, of our forefathers' rebellion. And as people who benefit, both directly and indirectly, from the oppression of others in our past, we must be at the forefront of the reconciling movement. It isn't enough to rush apologies, to immerse ourselves in cultural sensitivities, or even move into the most diverse neighborhood in America. What we have to do is give up our preferences, to value our neighbors higher than ourselves, to align our lives in such a way that we are in relationship with people from diverse backgrounds.

This may sound simplistic, but it is anything but. Once you are aware of your slow drift towards anyone and everyone who looks, thinks, or acts just like you, it takes a radical change to start moving in the opposite direction. And even if your intentions are good, the truth is that you will have to work hard to have friends who are different from you. The relationships won't be easy, or conflict-free. But they will be worth it. And the more we break bread with our brothers and sisters from different backgrounds, the easier it will be to one day find ourselves singing songs together, just like MLK would like.

The segregation of the church started long ago, in the hearts and the minds of our forefathers. And it is in us too, in our homes and neighborhoods and schools. We have long been busy re-building dividing walls that Christ came to tear down. It is time to take a good long look at our homogeneous lives, and to uncover the sins that masquerade as preference, and the systematic ways we have sought to distance ourselves from others who are different from us. Dr. King, much like the author of the book of Revelation, prophesied to us about the future. Instead of pretending our past does not exist, let's fix our eyes on the promise of a church where all tribes and tongues worship together. May we work toward it now, as it will be in the kingdom of heaven.

This piece was originally published on Christ and Pop Culture. Used by permission.

Children's Ministry: Aligning Your Ministry with Your Church's Vision
BCLStore.com