Sometimes, our church can feel like a battlefield.
Lee Eclov 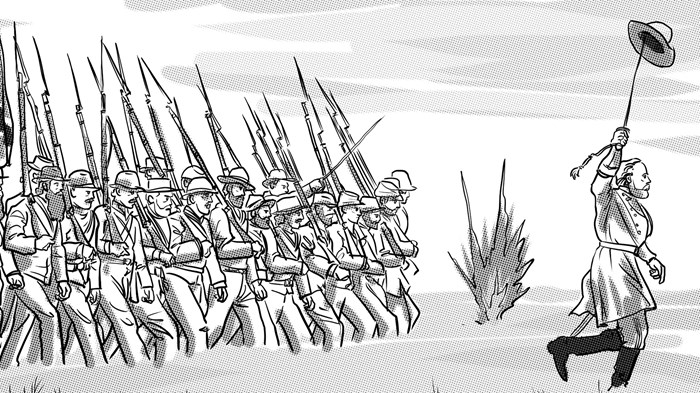 When I accepted the call to the church I now serve, I knew things had been bad. I knew things were still bad. But I never reckoned how bad it would feel.

None of the six elders who had called me to this position three months before were still in those positions when I arrived. Only two were still in the church—one of them was leaving within six weeks. They were good men, and I’m not criticizing them. But it was a hard way to start.

Consequently, the church had only been able to find three candidates to stand for elder at the election two weeks before I started. Even that had blown up. On my first Sunday, the evening prayer service I planned turned into a conflict over whether two of those men had been rightfully elected. (They had.)

Two weeks after I started, we had our first elders’ board meeting. Our chair told us that at current rates of spending, the church was about six weeks from bankruptcy. My own moving expenses had not been paid yet, and we had just signed a contract on our house.

What was going to happen to us?

By the time I came, the church was not so much divided as it was shell-shocked. It reminded me of those war-ruined cities where bridges are gone, the power is down, and people are scared to come out of their bunkers.

They weren’t the only ones who were scared!

Years ago, my friend David—knowing I like Civil War history—gave me a coffee mug with a Mort Künstler painting on it, entitled Steady, Boys, Steady. It portrays one brigade of Pickett’s Charge, the ill-fated bloodbath that unfolded during the Battle of Gettysburg. The painting shows a long double-line of ragtag soldiers, bayoneted guns resting on their shoulders, marching forward. One man carries their flag. Everything around them is obscured by the smoke of cannons. Out ahead of them, at the focal point of the picture, is Brigade Commander Lewis Armistead. He marches just a few feet ahead of his troops, his hat raised high on the tip of his sabre so they can see to follow.

The way leaders deal with the turmoil around us depends on how we deal with the turmoil within us. I used to teach a seminary class where students would bring in real-life case studies, and we would talk through how to handle them. The students were always reasonable and analytical about the dilemmas they brought in. So I started asking, “What would this problem likely do to you inwardly? How would you handle something like this emotionally?”

In harrowing times, what happens to us on the inside affects the outcome of the story. Surely Lewis Armistead marched into the smoke so bravely because of how he had been shaped inwardly. I read recently that Armistead, who died two days after that battle, had written in the cover of his prayer book, “Trust God and fear nothing.”

I’m a coward at heart—so for me, at least, courage requires a healthy infusion of God’s grace. Messes frighten me deeply. I hate to “march into the smoke.” But I have learned that God uses surprising tools to sculpt a brave heart.

Like soldiers confused by the smoke and din of battle, our souls can become disoriented by conflict, loss, attacks, and pain. These factors cause a kind of battlefield panic: we cannot think straight. When that happens to us as leaders, we become a danger to those following us. If we don’t get our wits about us, a lot of people can get hurt. Leaders whose souls are panicked on the battlefield—who are tangled in lies, in chaos, in fear—make terrible shepherds.

Years ago, I heard more than once that the Bible tells us—in one way or another—not to be afraid 365 times. That’s one for every day of the year. Like others have done, I set out to catalog these. I discovered there are actually about 120 such verses—which is still more than any other assurance and command I can think of, and more than enough for whatever situation we face.

At first, I did this strictly for my own soul’s sake. I discovered that, in times of fear, just reading these verses quieted my heart. It was as if those angels and prophets and apostles were talking right to me, like there was actually medicine in the words.

Next to Psalm 16 in my Bible, I have written “2/98”: that first tumultuous month in this church. “Keep me safe, my God,” I prayed often, “for in you I take refuge. . . . apart from you I have no good thing” (Ps. 16:1, 2). That passage also reminded me that God loved his people, “the noble ones in whom is all my delight” (16:3), and that despite the frightening circumstances, I was well-situated: “Lord, you alone are my portion and my cup; / you make my lot secure. / The boundary lines have fallen for me in pleasant places; / surely I have a delightful inheritance” (16:5).

I needed to pray those words in order to remember that things are not always what they seem.

When the smoke clears

Pastoral courage does not only come from battlefield experience. It comes from that hard, lonely interior work that God does on our souls.

Recently, my young friend Tony called me. He is a pastor, like me. When I asked how he was, he said, “I’m not doing so well. Do you have a few minutes to talk?” My heart sank. I braced myself for bad news.

Sometimes life in church leadership is dangerous—brutal, even. I feared I was going to hear a story of some disqualifying failure, or of a crushing depression, or that Tony was the bloodied casualty of a church war. I pictured friends who were no longer pastors, who were no longer leading. But it wasn’t what I feared. What Tony told me was a kind of perfect storm of pastoral pressure.

He told me that one of his elders had died suddenly, and he had to do the funeral in a couple of days. On his way to the elder’s home, his car broke down. His wife Julie was eight months pregnant, and there were some concerns relating to the pregnancy. Even his good news was bad: they had just closed on a house, but then discovered scores of dead mice behind the basement walls. His church was growing so quickly that he didn’t know how they could accommodate people, and the responsibility was weighing him down. In short, he was overwhelmed.

“Oh, Tony,” I said, “when I heard your voice, I was afraid you were going to tell me you had failed Jesus—but you have been faithful. I know this is a terribly hard time, but what a good pastor you are. Jesus is pleased.”

We talked through the various things he had mentioned. We prayed together. When I checked on him a few weeks later, the smoke had cleared. He wrote, “Both cars are running, mice are gone, walls are up, the funeral lifted Jesus high, baby and mom are healthy, and I am in awe of God's grace.”

That day as we talked, I should have told Tony the story about the picture on my coffee cup. He was learning—as I have—that sometimes all you can do is put your hat on your sword and march into the smoke.