How the director of America’s top hymnody database changed his mind about screens.
Harry Plantinga 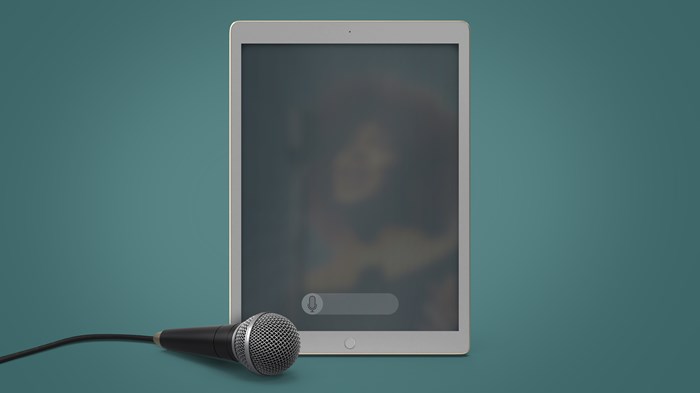 What is the future of congregational singing, especially in North America over the next 10 years? How is it changing? How can and should technology play a role? These questions are of first importance to me as director of Hymnary.org. In some circles, retuned hymns are growing. In others, singing the psalms is making a comeback. Some churches offer a high-tech multimedia presentation while a few are eliminating technology entirely. At times, the congregation is being largely removed from singing, with worship teams presenting a concert-like experience.

In singing together, a congregation “prays in unison” (Augustine). We express our belief and our hope to each other in an attractive, affective form. We build the communion of the saints. Singing together is a fundamental part of corporate worship, so changes are vitally important and potentially problematic. But not every aspect of the way we sing is essential. We should hold onto the essence: singing as corporate prayer.

One thing seems apparent: The future of congregational song 10 years from now is unlikely to be a boom in newly published hymnals. Hymnary.org indexes nearly 6,000 hymnals that have been published in the United States and Canada. It’s not a complete index, but it’s a decent proxy for the actual number of hymnals published. And the number of hymnals indexed is 17 in the 1780s, growing to a peak of nearly 600 in the 1910s. From there it has been declining steadily, and in the 2010s it may be the lowest since the late 1700s. 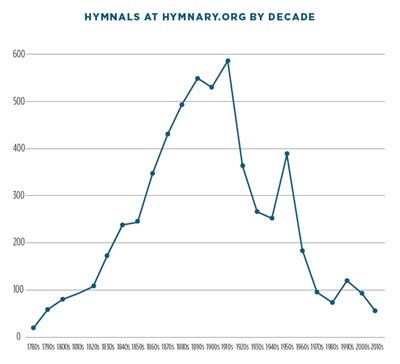 Of course, other kinds of print publishing are contracting, and new media such as the internet could be a factor—but they can’t account for a decline starting in the 1920s. It may be that the cost of publishing a new hymnal has risen high enough that the number of different hymnals is declining while the total number of copies printed is not. It also appears that there is less communal singing outside of places of worship. Yet the trend of the last couple of decades toward projection also seems to be having a significant impact.

We expected Hymnary.org to be useful for research and planning. But to our surprise, we found that the weekly peak of usage of our site is at the 10 a.m. hour on Sunday mornings. We have heard of three primary reasons for people to use Hymnary.org in worship services: to look up a hymn number, to view songs with larger print, and to see music notation when only the words are projected (or to see four-part notation when only the melody is projected). The latter two reflect special individual needs or preferences.

Mobile devices excel at providing access to information, including text and musical notation, in a way that accommodates user needs and preferences—hiding or showing different parts of music notation, adjusting print size, showing only the verses being sung, adding Spanish to the English, and more. A mobile app could automatically load a liturgy or order of worship with customized songs when a congregant enters the church—using large print, showing just the bass line of the music, or showing a lead sheet or trumpet score for musicians. Different people could see different forms of the music as needed, all synchronized.

A current drawback of mobile devices for this purpose is that screens are usually smaller than printed hymnals. Congregations could use printed hymns or project songs as well, leaving the choice to use a mobile device with congregants. And technology evolves to improve usability. Smartphones with folding touchscreens are just now coming on the market. Or churches could lend tablets with bigger screens to visitors and those who need large print. This may sound expensive, but inexpensive tablets can be purchased for $35, at which price they are already cheaper than some printed hymnals.

At one time I believed cellphones and other mobile devices were too distracting to use in worship services. When my cellphone is visible, I feel an urge to check my email, social media, or my calendar. However, I now believe that as we become more used to the constant availability of mobile devices, we will learn to adapt and use them appropriately. Someday the technology of mobile devices may be no more distracting than the technology of print is today. Either way, people are already using these devices in worship. Perhaps we can take advantage of the strengths of mobile technology and minimize the drawbacks.

Current projection technology has its limits. There’s the poor legibility and aesthetics, of course. It may be difficult to add musical notation, and the screen may be too small for that anyway. The congregation may experience disorientation and loss of control when the projected slide is advanced (especially if the timing is inaccurate).

There is considerable room here for the use of information technology to improve the experience, both for congregants and for worship leaders. We’re not far, for example, from projection systems being able to listen to the congregational singing and advance or scroll the slide automatically.

But music notation offers even more promise. Notation can be distracting to those who don’t read music, and fitting music notation onto a small projection screen may exacerbate other problems, but a dynamic presentation system would be able to make the best of the circumstances by showing just what is needed. It could adjust text size accounting for the width of the screen and the distance of the viewers.

Such a system could even show simplified musical notation that anyone can understand, giving a visual indication of the relative pitch and duration of each note. This could be designed to take up less space on a screen and less mental energy to interpret. Those who prefer standard musical notation could use a mobile device. We’ve created a prototype of a dynamic presentation system; if you’d like to try it, it’s online at rh.hymnary.org/demo. (We’re still working on the aesthetics!)

When worship leaders plan the songs for a service, they may take many factors into consideration: relevance to the sermon or season, style, familiarity to the congregation, and recency of use. They also have to handle licensing requirements. Then there is the time it takes to collaborate and coordinate. The challenge is greater in small congregations, which are unlikely to have a trained worship leader.

A robust software system for worship planning could suggest seasonally appropriate songs for the service, taking account of the sermon, the congregation’s favorite songs and willingness to learn new songs, musical style preferences, how recently songs have been sung, popularity of songs in similar congregations, and the like. The worship leader would be able to select from the suggestions or choose other songs. The system could track usage and report to licensing agencies as needed. It could store media and scores and deliver them to musicians. It could automatically project the songs and engrave them as needed for electronic or paper distribution. And it might work in conjunction with an app tailored for the congregation’s use.

There are ethical issues here. Recommendation systems such as those used by Facebook or YouTube, by giving you more of what you apparently like, tend to enhance differences and build “bubbles.” Should a worship planning system say, “You liked that song with bad theology; here’s one that’s even worse”? Perhaps limiting suggestions to songs approved by a denomination or other body is a partial answer.

It is very expensive for a denomination to publish a hymnal, but they could get some of the benefit with much less cost by simply offering a list of suggested songs to guide the recommendation system. The system would handle licensing, engraving, printing, and projection, and they could update it much more frequently as well to respond to current needs and issues.

The Future: Hymnals and Apps

A long-term change in congregational singing over the last few decades has been a marked increase in projection and decline in the use of printed hymnals—a few decades ago, no congregations projected and nearly every congregation used printed hymnals. We don’t know how long this change in practice will follow that trajectory—it could even reverse. There are even a few congregations moving toward the elimination of technology in worship. Still, it appears likely that technology will continue to make inroads and to be used in new ways.

Meanwhile, congregations (and individuals within congregations) will continue to differ in the technology they use—printed hymnals, projection, printed liturgies, and whatever new technologies are on the horizon. At Hymnary.org, we hope to explore and develop ways to support congregational singing without losing the essence of congregational song. The church may not always sing in unison—but there are ways to help it sing in harmony.

Harry Plantinga is professor of computer science at Calvin University, where he also serves as director of Hymnary.org (where a version of this article first appeared) and the Christian Classics Ethereal Library. Hymnary.org is supported by the Lilly Endowment, Inc.

Discipling in a Digital Age
BCLStore.com

Join the conversation on Facebook
Tags:
Church MusicHymnsMusicTechnologyWorship
From Issue:Fall 2019: Church Ministry: The Next 10 YearsSeptember 25, 2019

END_OF_DOCUMENT_TOKEN_TO_BE_REPLACED
Already a subscriber? Log in
Read These Next