It’s time to make this tricky biblical genre a mainstay in your sermon rotation.
Ryan Boys 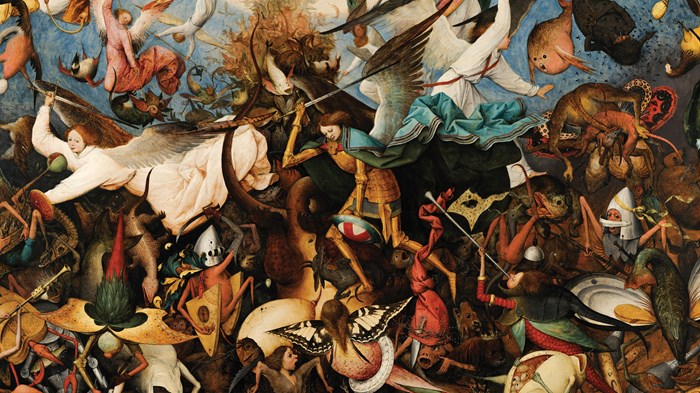 Several years ago, I gathered a small group of dear saints together to discuss a short sermon series I was preparing on Revelation 12 and 13. These chapters are not for the faint of heart—they recount the apostle John’s apocalyptic vision of the great dragon, Satan, seeking to devour the Messiah as a baby. I asked the group, “In what ways are these chapters relevant to us?”

One person looked me straight in the eye and said, “None.”

This person’s candid comment summarizes the challenge pastors face when preaching the apocalyptic literature of the Bible. We believe these passages are inspired by the Spirit of God, but we struggle to demonstrate their significance to the people in our churches.

I expect to preach the apocalyptic parts of the Bible more often in the coming years. Biblical apocalyptic works were addressed to disenfranchised people, those who had lost confidence in any greater plan or story. Ezekiel and Daniel received visions for the benefit of the earliest Israelite exiles in Babylon in the 6th century BC. They had lost everything, and some had watched the temple in Jerusalem burn. Zechariah’s visions were given to exiles who had returned to Jerusalem expecting to find it in ruins.

Many people today have adopted a similar mindset as those first readers of biblical apocalyptic visions. They have come to doubt there is a larger, unified story that gives meaning to their lives. American Christians haven’t watched their temple literally burn, but they have seen trusted spiritual authorities flame out through moral failures while mounting cynicism slowly snuffs out their confidence in religious institutions.

The collective pressure of culture via social media and increased tribalism has driven many to embrace stories that are fundamentally incompatible with a biblical worldview. In a similar situation, the apostle John shared his vision in Revelation to the early church as it struggled for life in the Roman Empire. The early church was a minority group facing immense pressure to step in line on issues like emperor worship, idolatrous trade guilds, and the Greco-Roman sexual ethic.

People have been failed by churches, by politicians, by courts, by family and friends. They’ve seen that career success, wealth, and technology cannot provide meaning. Karen Blixen, author of Out of Africa and Babette’s Feast, wrote, “All sorrows can be borne if you put them in a story or tell a story about them.” People have many sorrows, but most of the popular narratives available to contain them—those that claim ultimate justice can be achieved through political triumph or grassroots movements—are woefully insufficient.

We also need to face the reality that our circumstances may not get any easier. The people in our churches are constantly tempted by quick-fix solutions to their sorrows. They need lasting hope and direction for living well in a time of disenfranchisement, not shallow promises of better days. Enter the apocalyptic visions of the Bible.

The apocalyptic literature of the Bible was written to foster faith in people who had lost their faith in God and his story. Our people’s disenfranchisement isn’t due to exile but rather to existential tragedy. How can apocalyptic visions, thousands of years old, be relevant to people’s ongoing existential crises? By looking forward to God’s judgment of the wicked and his ultimate resolution of the problem of evil, the vindication of believers and their faith in Jesus, and the ultimate establishment of God’s kingdom on the new earth. Each of these themes will resonate in our culture in the years to come.

After working with my group through the vision of Satan raging against the church in Revelation 12 and 13, one man commented to me, “All the evil in the world—God turns it around for his glory!” He had lost a job because of active persecution against believers in his company. He had felt the sting of evil, and the apocalyptic vision in Revelation helped him interpret his suffering in light of the gospel.

The guarantee of God’s judgment of the wicked is a major focus of biblical apocalyptic passages. People who have seen the wicked prevail need this hope. We’re all too familiar with courts that fail, politicians who can be bought, and neighbors who take advantage of others. We’ve seen smalltime thieves steal smartphones and corporate criminals fleece people for billions. When the wicked prosper, the apocalyptic component of the gospel tells us, “This isn’t the end of the story.”

The apocalyptic theme of the vindication of believers is especially encouraging in cultures where Christians face marginalization and persecution. Peter Leithart writes, “Death is never the last word for the Church of the living God, the God who is faithful to death, and then yet again faithful. Christianity and the future are synonymous.” Our faith must be in the final stanza of the gospel song, where martyrs stand victorious with the Lamb.

The picture apocalyptic writers paint of the establishment of God’s kingdom on the new earth is hope-giving and faith-renewing. Advances in technology have given us a real-time view of the brokenness of this world. Sin isn’t new, but we have more opportunities to witness its effects than ever before—instantly and from anywhere. Reasons to despair surround us. Even so, the apocalyptic endpoint of the gospel points us to the final victory of Jesus over sin, death, and Satan. Jeffrey Arthurs articulates this hope clearly in Preaching with Variety: “Hope is raised and faith is renewed when preachers announce that the Lamb who was slain will be enthroned in the New Jerusalem.”

Not only do biblical apocalyptic texts give us hope for the future, they also encourage radical discipleship right now, in the midst of suffering and a culture at odds with God’s will.

Eugene Peterson understood the importance of the Bible’s apocalyptic elements, not just for future hope but for faithful living in times of strife. In The Contemplative Pastor, he described this genre’s importance for active ministry work:

Ernst Käsemann captured what many think is the unique biblical stance in his sentence: “Apocalyptic was the mother of all Christian theology.” Perhaps, then, the grandmother of all Christian pastoral work. Early church Christians believed that the resurrection of Jesus inaugurated a new age. They were in fact—but against appearances—living in God’s kingdom, a kingdom of truth and healing and grace.

Far from being irrelevant to our current circumstances, the Book of Revelation, according to Peterson, gives us a clear example to follow in John’s response to his visions:

After a few introductory sentences in the Revelation, we come upon St. John in the place and practice of prayer (1:9–10). ... At the end of the book he is still praying: “Amen. Come, Lord Jesus!” (22:20). St. John listens to God, is silent before God, sings to God, asks questions of God. The listening and silence, the songs and questions are wonderfully in touch with reality, mixing the sights and sounds of Roman affairs with the sights and sounds of salvation—angels and markets and Caesars and Jesus.

Pastors preaching these texts don’t have to search hard for prescriptions for active kingdom living. For people who have lost a sense of their own story in times of confusion and conflict, the apocalyptic nature of the gospel encourages steadfast discipleship and close communion with our Creator.

Preaching and teaching biblical apocalyptic passages is admittedly difficult. Hands down my worst sermon ever was an attempt to preach all of Ezekiel 40–48 in one shot. It wasn’t pretty, mostly because I hadn’t preached apocalyptic visions often and I wasn’t used to dealing with such a large chunk of Scripture in a single sermon. After realizing I had taken on too much, I had to abandon ship halfway through the sermon. My congregation was gracious. My inner critic not so much.

Since then, I’ve learned a few things about preaching apocalyptic passages well. First, you need to navigate the weirdness factor. There’s no getting around it—apocalyptic imagery is strange. Part of that is a function of our distance from the ancient world. But these images weren’t exactly common in the Ancient Near East, either. For the original recipients of these messages and for us, the weirdness of biblical apocalyptic visions brings an unexpected blessing: They are shocking! A dragon waiting to eat a baby, a flying scroll destroying a house, a decomposing army of dry bones coming to life—these are unforgettable images that engage the imagination of hearers and readers. While preachers may be tempted to downplay or explain away the dramatic imagery, try instead to highlight the shocking nature of these visions. Artwork or media animation can bring to life what these passages describe. I’ve found that displaying visuals like Renaissance paintings or study-Bible sketches of visions helps people experience these passages in ways they might not when a text is quickly read out loud.

Second, I find it helpful to remind hearers of the overarching narrative of the Bible at the beginning and end of any sermon on an apocalyptic text. Imagine giving a sermon about Satan’s efforts to destroy the church without explaining that the Cross guarantees his failure. The danger of missing the forest for the trees is high when preaching these passages because they often require so much explanation. These passages will only help us articulate the grand story of the Bible if we overcome the temptation to get caught in the weeds.

Finally, my congregation responded well when I tethered the visions we were reading to their real-life circumstances. People may not be walking around with the name of the beast tattooed on their foreheads, but by worshiping idols like money, reputation, or food, they are actually bowing down to the beast today. Contemporary listeners may not be mourning the destruction of the temple, but many are mourning significant loss in their lives. The hope of the New Jerusalem can provide comfort in times of loss and despair, in ancient Babylon and in 21st-century America.

All of our present and future sorrows are part of God’s grand story, and we can live faithfully even when our culture turns away from God. By proclaiming these apocalyptic truths from our pulpits, we can help people endure through faith.

After I preached the sermon series on Revelation 12 and 13, I met again with that brave group of saints for discussion. I braced for impact; those messages weren’t my best. But as we talked, I noticed a remarkable change in the group. Gone was the assumption that Revelation 12 and 13 had nothing to do with them. A lively discussion ensued about the many ways those chapters apply to each of us. As we wrestled with the meaning and relevance of the passages, I was greatly encouraged—not so much by my homiletic skills but by the way God was using these apocalyptic visions to grow us. As we concluded our discussion, one person offered this takeaway: “God isn’t absent in all of this.”

END_OF_DOCUMENT_TOKEN_TO_BE_REPLACED
Already a subscriber? Log in
Read These Next