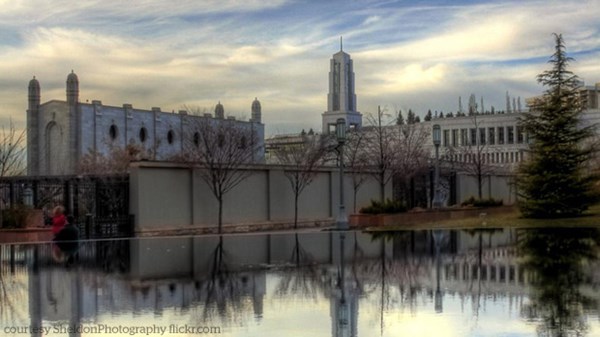 How Mormon Country Became My Home

Now, instead of complaining about Salt Lake City's odder aspects, I pray for its well being.
Sara Zarr

When my husband and I moved from San Francisco to Salt Lake City, we told ourselves and our appalled friends that we'd give it two years. Two years to ascertain whether we could survive summer heat, winter snow, being inland, minimal sources of good Chinese food, and a total absence of Mission-style burritos.

And what we transplants to Utah politely call "the culture."

It's a shifty phrase that can refer to, among other things, the Church of Jesus Christ of Latter-Day Saints and its members, the conservative political landscape, the relative racial and ethnic homogeny, the baffling liquor laws, or the pioneer spirit—which is sometimes manifested in drivers shunning the idea of lanes or laws.

That move was over ten years ago, and we're still here.

At first, we made fun of nearly everything we observed. We'd tune into the local news and find lead stories about "lake stink"—what happens when the winds blow over the Great Salt Lake in such a way that the smell of decaying algae floats over the valley.

We'd discuss and try to imitate the inscrutable accent that varies from region to region and block to block. Before living here we never knew about wire deer, family portraits the size of big-screen TVs, obsessive leaf-blowing, unironic Jell-O salads, and the Holy War between the University of Utah Utes and the BYU Cougars.

Whenever I traveled and was asked, "Where are you from?" I'd say, "Well, I live in Utah right now but I'm from San Francisco." Puzzled looks, polygamy jokes, and the assumption that we ski and/or are Mormon inevitably followed.

I laughed along, though I also boasted about our cheap rent, the ease of parking, the beauty of the Wasatch Mountains.

Yet I clung to my California connections and identity. For at least a year after moving, I continued editing my San Francisco church's newsletter. I kept working for my Bay Area company as a telecommuter. Friends often asked, "When are you coming home?" But I didn't get the sense that they asked so much because they missed us. The underlying question was, How could smart, cultured people like us possibly make a life in a place like Salt Lake City?

I absorbed and believed in that question, failing to recognize it for what it was. Making sure people knew about my Bay Area roots helped keep me from being typecast in the role of Utahn, which to me and to my non-Utah friends meant: religiously odd, maybe sporting bad hair, possibly not too savvy—at least, not in the ways valued by my motherland. "Don't lump me in with those people," my words implied. Clearly, if not explicitly, I was saying, "I'm better than them." Meaning my new friends and neighbors.

It's easy for non-Mormons in Utah to feel as though we're living in exile. And it's easy to react to that feeling by building walls and pulling up the drawbridge, creating our own little version of Salt Lake where we are Us and they are Them. To always keep one eye on the exit, assuming whatever opportunity may come is better than this.

How can you make home, and love your neighbor, if you believe the lie that you're superior to the things and people that surround you?

A chronically wandering eye, in any context, is a thief. It steals the joy of living in the present. It keeps you from being fully engaged with what's right in front of you.

At some point along the way, my pastor spoke on Jeremiah 29. It's a letter to exiles, and the message from God that comes through the prophet includes:

Build houses and settle down; plant gardens and eat what they produce. Marry and have sons and daughters; find wives for your sons and give your daughters in marriage, so that they too may have sons and daughters. Increase in number there; do not decrease. Also, seek the peace and prosperity of the city to which I have carried you into exile. Pray to the Lord for it, because if it prospers, you too will prosper. (Jer. 29:5-7)

My cheating heart convicted, I made a commitment to stop fantasizing about San Francisco, Seattle, Portland, Denver. To stop trolling Craigslist, lusting for apartments in cool neighborhoods all over the country. Anywhere but here.

Still, after my last book tour and the rush of being in new places, I came home resenting Salt Lake and whinily longing to live in a "real" city. I told my husband, "Summer 2011. We're out of here. Start working on your resumé."

2011 is nearly upon us and we have no plans to move in the coming year. I do sometimes cast a longing glance westward. There are days and weeks I'm convinced there is "nothing to do" here.

But I know that the reality, should I choose to accept it, is that moving here has brought nothing but blessings. This is where my writing career flourished. This is where I've made some of the best friends of my adult life. (And most of them are Mormon, or LDS, as they've taught me to say, for Latter-day Saint.) This is where I got mentally, physically, and spiritually healthy. This is where I lived out my 30s and truly grew up.

It seems to be working. When I fly into Salt Lake, I find myself pressing close to the window, watching for the lights of the valley. When I see the dome of the capitol building ahead and the salt flats below and the outline of the Wasatch Range all around, I can't help but feel I'm home.

This piece, by YA novelist Sara Zarr, originally appeared in IMAGE Journal's Good Letters blog in December 2010. You can read more of Sara's posts here, and you can sign up for IMAGE's free e-newsletter, ImageUpdate, here to receive bimonthly news and reviews featuring the best of art and faith.

Sara Zarr recently spoke with Her.meneutics about her new novel for young adults.

How Mormon Country Became My Home